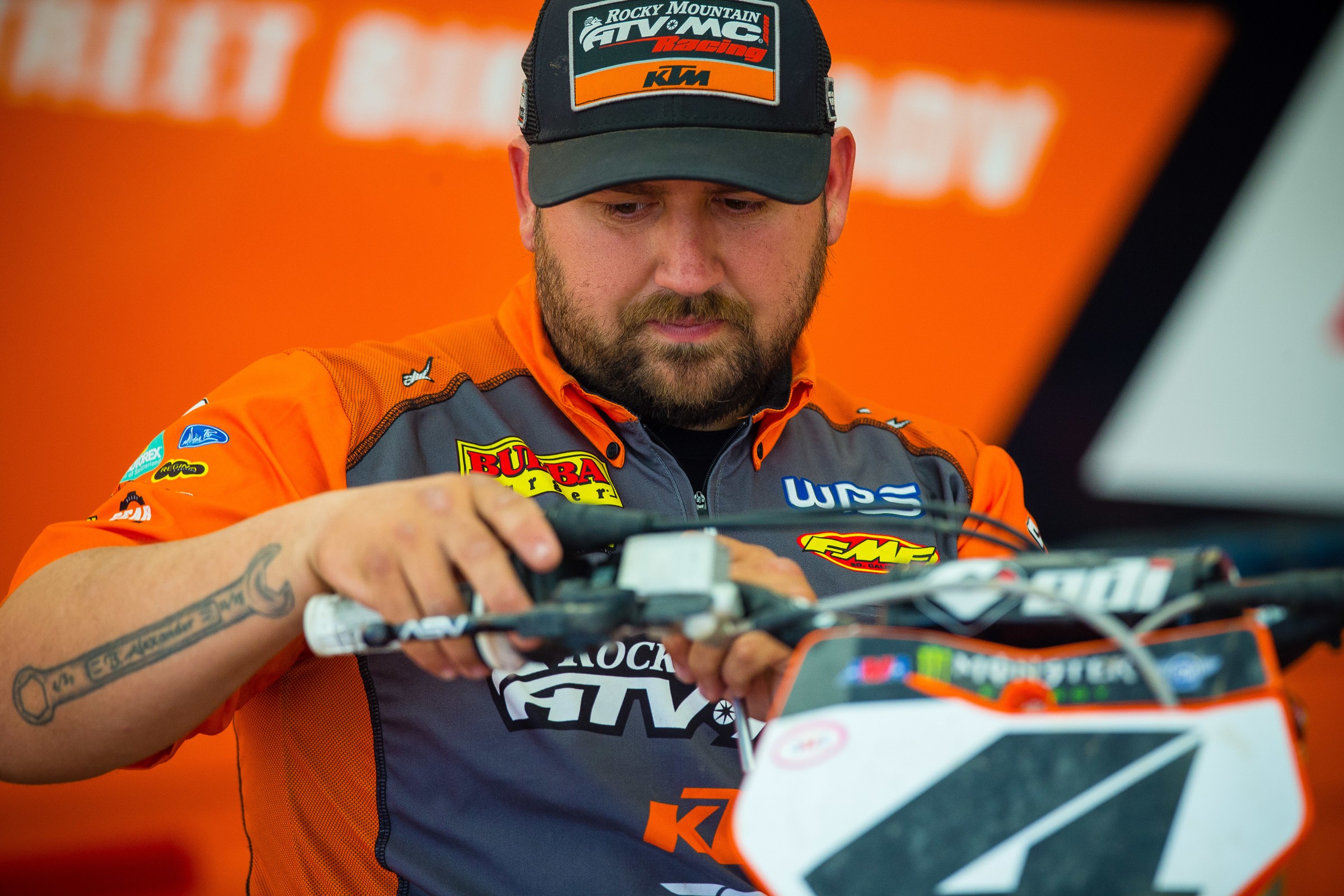 Throughout the month of December, Racer X Online editors and contributors will be handing out one award each day for an outstanding performance or effort or product related to the global motocross industry in 2018. Each winner will receive this award, which we’re calling a Roger, just like the Academy Awards have their Oscars. It’s in honor of Roger DeCoster, a great ambassador for the sport of motocross for more than 50 years. Today’s topic is Racer X Mechanic of the Year.

When we were thinking of someone for the Roger Award for the Mechanic of the Year there were plenty of worthy candidates. Billy Hartle helped Aaron Plessinger to two titles, Brian Kranz won an outdoor title with Eli Tomac, and Chris Laredo wrenched Jason Anderson to the 450SX title.

(To me, I think an outdoor title is way gnarlier to win for a wrench by the way. The 12 rounds of Lucas Oil Pro Motocross Championship is crazy hard work for a mechanic.)

There are plenty of people that would love to be a factory mechanic and for sure it’s a pretty cool job. If you can’t make it as a racer, then being an integral part of their success is pretty close, right?

Here’s the thing: a mechanic’s job has changed a hell of a lot the last decade or so. It’s not the hands-on job that so many people think it is. The riders at the highest level are CEO’s of a little company that includes trainers, coaches, significant others, man-friends, and more. The days of the wrench and the rider working side by side and working on the perfect lap/bike set-up are over. On the team side there are team managers, suspension guys, suspension company guys, motor guys, crew chiefs, and more. The guy that’s actually bolting the bike together is many times, way, way, way down the totem pole.

What in the heck has happened to the Skip Norfolk’s of the world?

They’re mostly gone nowadays but there’s one man out there that was all in with his rider the last five years or so. First with Andrew Short and now with Blake Baggett, Nate Alexander took being a mechanic back to the old school.

Alexander was the race bike wrench for Short and then Baggett and also went back to Texas (with Short) and Florida (with Baggett) during the week to help out his guy. Working on practice bikes all week, working the stopwatch, helping out wherever he can on the property, and then flying to a city to build the race bike, Alexander did it all. The term no days off literally applied to Nate the last few years, first when the team had Short and was the BTOSports.com KTM team and now the Rocky Mountain ATV/MC-KTM-WPS team.

What Alexander has done the last few years is unprecedented in the sport when it comes to a mechanic, and along the way Baggett was a consistent podium contender indoors and race winner outdoors. The workload is phenomenal and throughout the time, Nate put his head down at the expense of a life for himself to help Blake and the team reach their goals. Simply put, Alexander was all in on helping out his rider and for that, we give him the Roger for the Mechanic of the Year.

The team and Alexander went their separate ways at the end of 2018 and for 2019, Nate’s going to be doing half the work he did the last few years in helping out Plessinger with his practice bike work.

Congrats, Nate. Now try to have a life, ok?