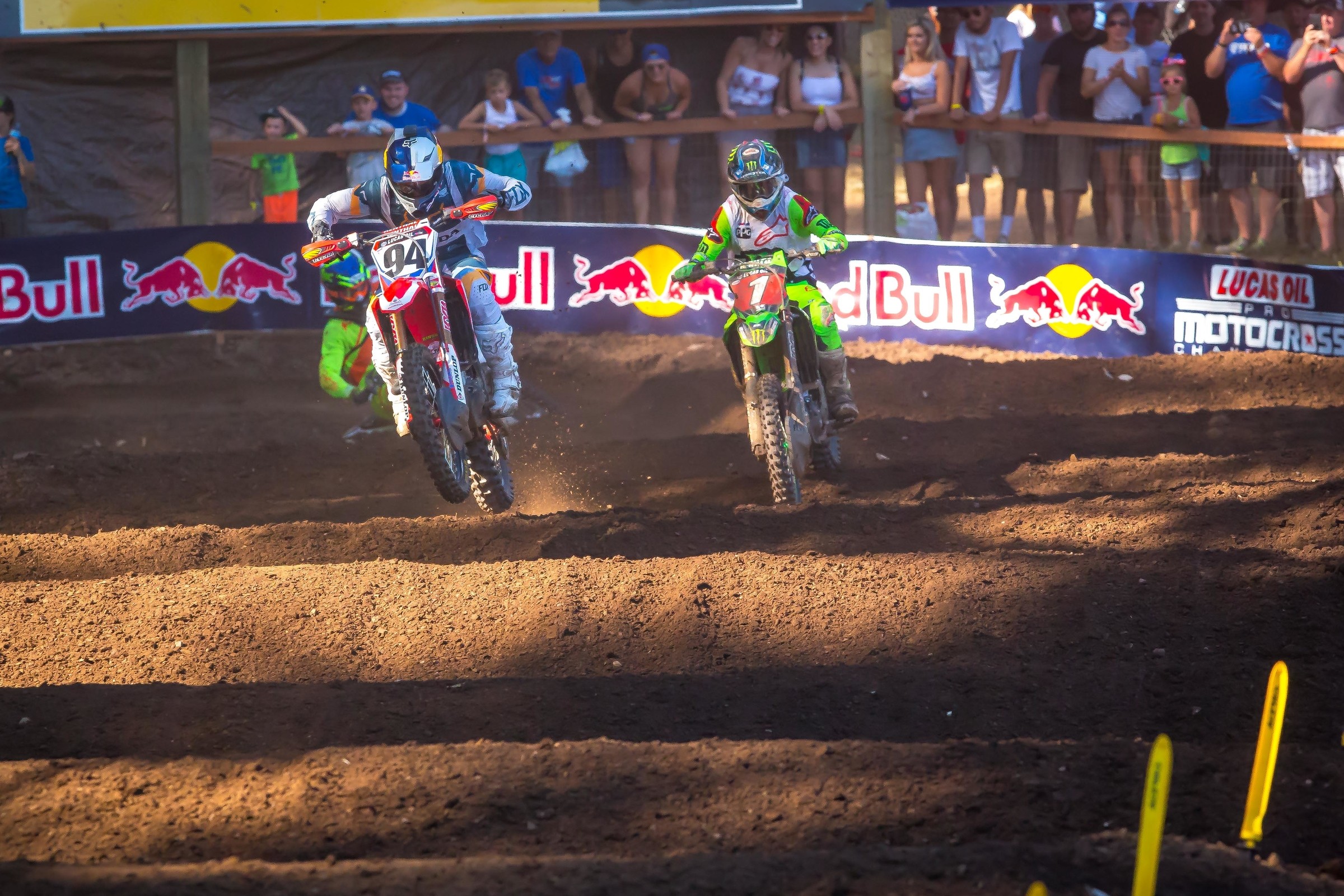 Throughout the month of December, Racer X Online editors and contributors will be handing out one award each day for an outstanding performance or effort or product related to the global motocross industry in 2018. Each winner will receive this award, which we’re calling a Roger, just like the Academy Awards have their Oscars. It’s in honor of Roger DeCoster, a great ambassador for the sport of motocross for more than 50 years. Today’s topic is Racer X Motocross Race of the Year.

Let’s end our awarding of Racer X, um, awards, with the most classic category of all. How about an award for a good old-fashioned motocross battle? Yeah, let’s do it. Let’s drink in the drama of a perfect day at the races. A beautiful, historic track, passionate fans, and superstar riders pushing to their limits to get a race win they all want very badly.

That was the second 450 moto at Washougal this year. It was perfect. Justin Bogle continued his ridiculous run of starts with his sixth holeshot of the season, but was quickly overhauled by a determined Ken Roczen. Kenny had just won his first moto of the season—and first moto since returning from injury—two races earlier at RedBud. He was looking for that final step, getting a second moto win and the overall. Bogle was left to battle with his Autotrader.com/Yoshimura Suzuki teammate Justin Hill, and then came Marvin Musquin and Blake Baggett. Further back sat first-moto winner Eli Tomac, who set about making quick passes until he ran into Justin Barcia. Meanwhile, Musquin displaced Baggett and the JGR boys to take second.

Musquin, who desperately needed to moto win to make up points on Tomac, tried to track down Roczen. Tomac moved to third but then fell down, forcing him to have to re-pass Barcia. He did that, but Musquin and Roczen had built up a slight gap. Eli, though, made a habit of incredibly late-race charges this year, and he bore down, caught Musquin, and looked for an opening. They went at it hard, Musquin stopping Eli’s first two pass attempts. Finally, Tomac made a pass stick, and with it he had already clinched the weekend’s overall win with 1-2 scores. But he was going fast enough—and had enough time—to go after Roczen for the moto win.

Thus began another classic Roczen/Tomac battle, with Tomac manhandling his Monster Energy Kawasaki, and Roczen using all of his race craft and smarts to keep the lead on his Honda. Tomac took several swings at it with three laps to go (and with Musquin still close behind in third) but Roczen held him off. Finally, with the two-laps to go board out, Tomac blitzed Washougal’s famous supercross-style whoops to make the pass on Roczen. Two corners later, Tomac absolutely and completely destroyed a berm, unleashing crazy corner speed as he tried to sprint away.

Roczen kept it close though, and still had Tomac in sight down to the last turn and the last lap. Tomac prevailed, though, in an amazing comeback, and a great battle with some of his toughest competitors.

It was a classic motocross battle for 30 minutes and 2 laps. We give it the Roger for Motocross Race of the Year.