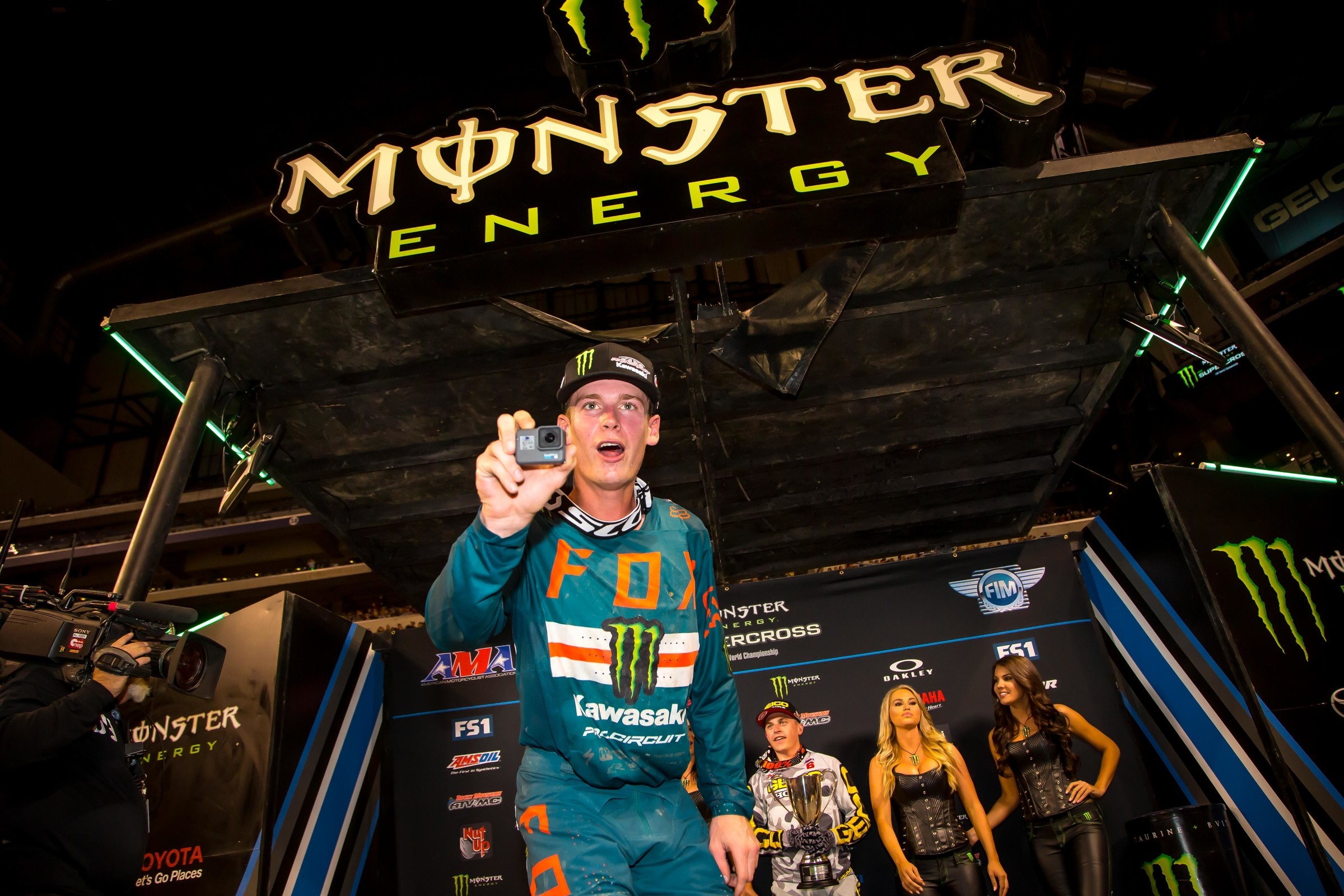 Throughout the month of December, Racer X Online editors and contributors will be handing out one award each day for an outstanding performance or effort or product related to the global motocross industry in 2018. Each winner will receive this award, which we’re calling a Roger, just like the Academy Awards have their Oscars. It’s in honor of Roger DeCoster, a great ambassador for the sport of motocross for more than 50 years. Today’s topic is Racer X Rider Media of the Year.

We were originally going to name this category of Racer X Award the Racer Instagram of the Year, until we realized one rider has already blasted past Instagram and to the next level. He’s running a Vlog, and by the very first episode, he had already outstripped all previous standards for insider access.

The source is not surprising. Adam Cianciarulo has been winning at the media game for a long time. He was on Twitter in the early days, under his “a little guy trying to make it in a big world” bio tag, and once explained his day of going to Ryan Villopoto’s place, while still on minicycles. Could he jump all the big jumps? Tweeting a play-by-play of a random practice day was still pretty new. AC gave us the goods.

Instagram later took over as the de facto town square for motocross news. Adam and his buddy Ken Roczen were there, killing the Instagram game with info that was in full reveal. They were funny, they were insider. Roczen will do some flexing and get a little controversial, while Adam’s brand plays on the lighter side, often making fun of himself before you can even get there.

That look on your face when they tell you you’re never going to be tall enough to ride a 250 ?. I think I was 14 here. #tbt @concept2inc ? @directmotocross

He took this brand—revealing, yet funny—and found an even better outlet. His Vlog started after the Anaheim 2 Supercross, first as an easy way to show how much you can do with a GoPro. It quickly became much more, and yes Adam did tell us he got to the point where the editing was getting overwhelming.

He began to cover other topics, like including Roczen in a post, or going to Daytona, where he wasn’t even racing, just to cover behind-the-scenes stuff. I think Daytona might have been his best work, or maybe the next one from Indianapolis, where he walked back to the Monster Energy/Pro Circuit Kawasaki truck at the end of the night to find the mechanics doing donuts in the snowy parking lot. It was a random clip, but to me it displayed everything the Vlog can do—I don’t think the mechanics were supposed to be doing donuts in the snow on race bikes. Maybe we weren’t supposed to see this. We did.

Finally, a word about Finding Stew, the “epic” two-part series starring Adam and our own Steve Matthes. They were on the hunt for James Stewart, and while they didn’t actually find him, the video revealed Adam at his not-taking-it-too-seriously best. Whereas Roczen uses the power of Instagram to show his own confidence, Adam uses his social media to prevent the need to do so in the first place.

See, there were those early years when AC was winning a lot as an amateur, and all of that winning brought a lot of attention and hype. It put a target on his back, and any hint of failure as a pro presented the threat of “overrated,” “overhyped” or, gasp, “bust.”

Adam did win as soon as he got to supercross, but injuries soon derailed that, and five years later he’s still in pursuit of the 250SX title that seemed headed his way back in 2014. However, he’s successfully pivoted so far away from anything remotely cocky, that no one can cut him down. He’s transparent, he’s having a ball, and even in all of these social media posts or Vlogs or interviews, he never says he’s great. By always acting like a fan, and a nice, humble guy, he’s successfully insulated himself from all the online and social media haters. Anyone who figures that out definitely deserves an award.