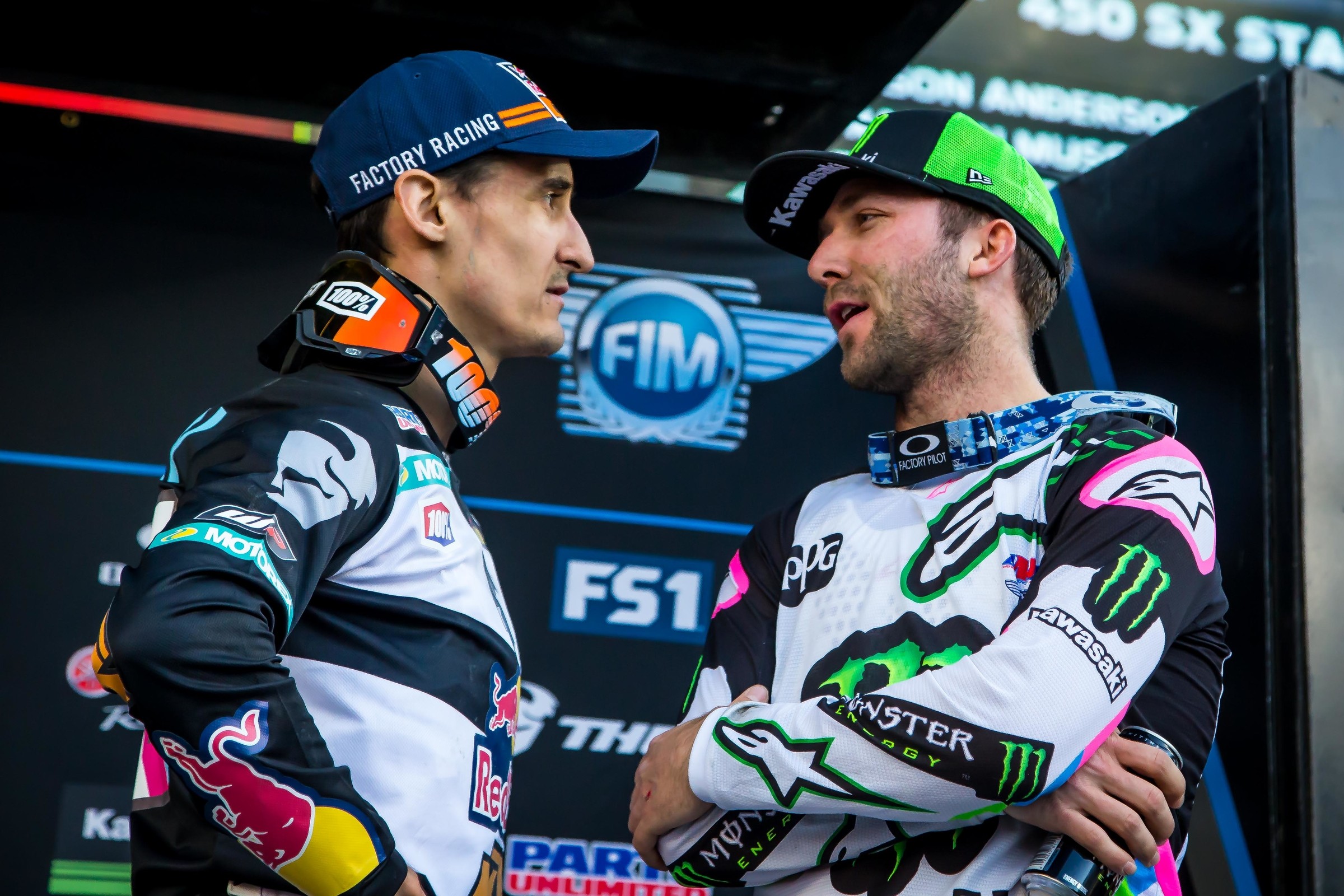 Throughout the month of December, Racer X Online editors and contributors will be handing out one award each day for an outstanding performance or effort or product related to the global motocross industry in 2018. Each winner will receive this award, which we’re calling a Roger, just like the Academy Awards have their Oscars. It’s in honor of Roger DeCoster, a great ambassador for the sport of motocross for more than 50 years. Today’s topic is Racer X Press Conference of the Year.

The most controversial moment of the 2018 Monster Energy AMA Supercross season led to the most controversial press conference, as well. Marvin Musquin’s takeout/block pass (arguments still rage over proper classification) on Eli Tomac at the Foxborough Supercross in April set the scene for a memorable post-race exchange, easily the best of the year.

Marvin led the whole way in Massachusetts with Tomac trying to catch him from second. With two laps to go, Tomac closed in and executed a perfectly clean pass on the inside of a corner after the whoops. Then the white flag emerged, and Musquin tried to retake the lead. In a 180-degree corner, the Red Bull KTM rider dove straight to the Tuff Blox on the inside, while Tomac picked the rut furthest to the inside and followed it around the turn. By the time Tomac was at the exit of the corner, Marvin was there, and they made huge contact with Eli going down. Marvin went on to win the race.

As with all hard passes, controversy erupted. The Foxborough fans rained boos on Marvin. In his TV interview, Marvin pretty much owned it by saying it was the last lap with a 450 supercross win on the line, and he had to go for it.

Onto the press conference. Marvin started owning it but then began veering into the wrong territory, bringing up other passes from other races.

“A lap and a half to go I was like, man, let’s try to do something,” said Musquin. “It’s for the win. I led so many laps. I was bummed. I felt like I was riding really good so I could charge. Then I saw right there, that inside and obviously I was going into that main rut the whole main. He cut really, really tight and I definitely didn’t expect it. I came in here and obviously the outcome was pretty brutal.”

“I’m sorry about what happened with the crash,” he continued. “It could have been bad for me, too. For a 450 main win, sometimes you got to try your hardest. This year I’ve been taken out a few times. Jason [Anderson] at Oakland and [Weston] Peick at whatever, Dallas. I had a couple crashes when people kind of cut my [line] pretty bad. I don't know. I’m not known as a really aggressive rider like that, but like I said it was a great main and I just tried.”

Tomac is not known for being outspoken with the press, but he was heated this time.

“Then I just got blasted from the inside on that second turn,” he said. “It was out of nowhere and it was a cheap shot. That was tough.”

As Musquin started explaining other examples of rough riding, he stumbled into Tomac’s #bunching strategy at Las Vegas the previous year. There, the Monster Energy Kawasaki rider kept slowing up Ryan Dungey to let the pack catch up and try to steal points.

Musquin: I think we’ve seen worse. Last year at Vegas, for example, at the final round.

Tomac: Yeah, you can fix a race in New York [East Rutherford] two weeks before that and not have anything happen. Then we’ll get a $5,000 penalty, and that’s like a drop in the bucket for the 450 class, so why not just keep blasting people?

Musquin: I’m pretty sure we can talk about stuff like that….

Musquin: I know we can talk about stuff like that for a long, long time.

Tomac: Guys that think twice. Including myself and Marv.

Musquin: Josh Grant was right there in Vegas trying to help you. We could talk about stuff like that a long time. Things like that happen.

On and it went. The room got tense!

Earlier in the day, the same press room had been used for a publicity stunt, with Monster Energy-backed New England Patriots NFL star Rob Gronkowski declaring he was quitting football to focus on supercross.

Tomac, already showing considerable anger, showed he’s also capable of some humor. A reporter asked, “What do you guys think Rob Gronkowski is going to do in the supercross scene?”

Tomac responded: “I wish I was as big as him on that last lap, then I wouldn’t have moved.”