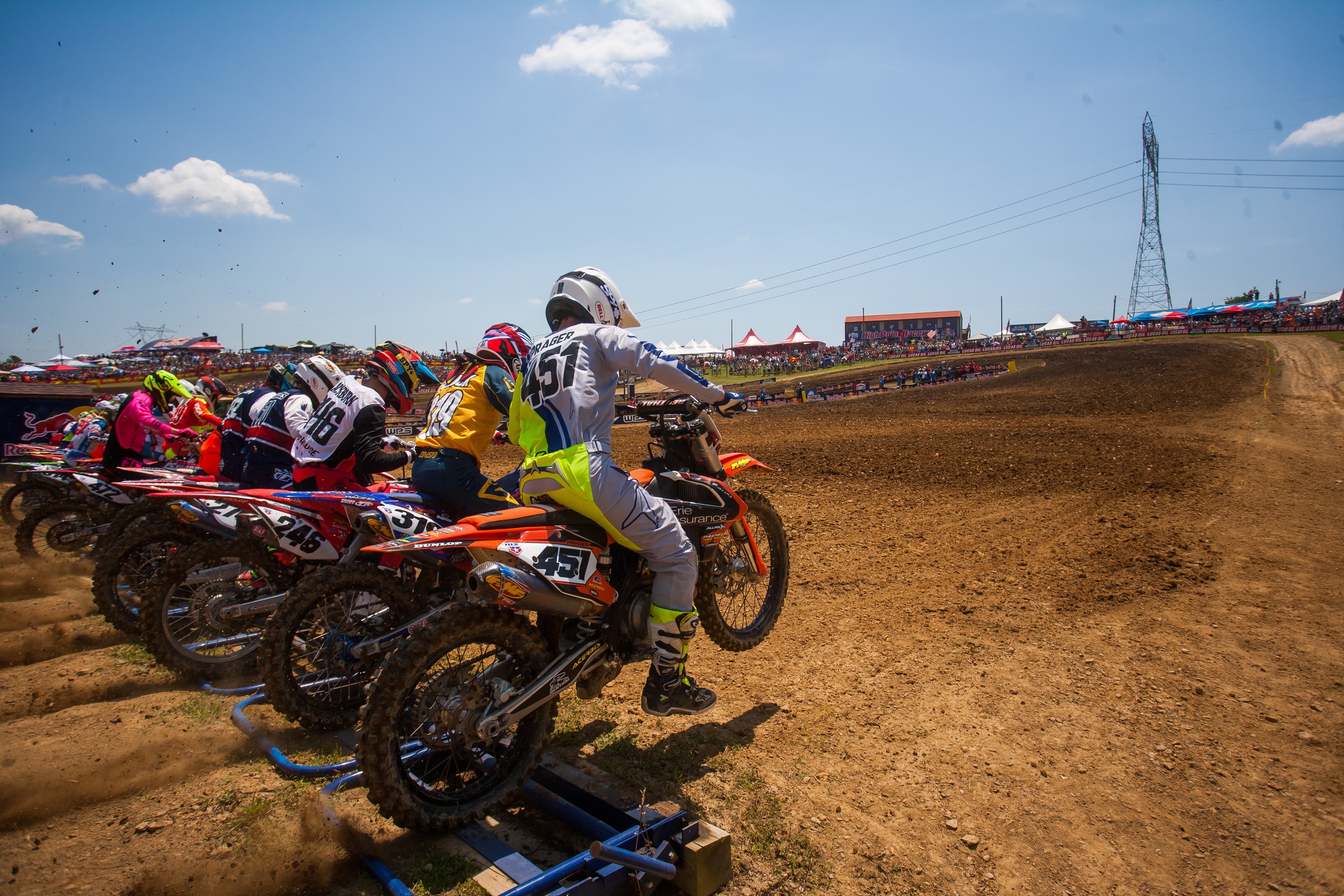 Throughout the month of December, Racer X Online editors and contributors will be handing out one award each day for an outstanding performance or effort or product related to the global motocross industry in 2018. Each winner will receive this award, which we’re calling a Roger, just like the Academy Awards have their Oscars. It’s in honor of Roger DeCoster, a great ambassador for the sport of motocross for more than 50 years. Today’s topic is....

New Rule of the Year? That seems like a rather odd topic for a list of top things for the last 365 days. Most rule changes seem to come with controversy and criticism, because they are usually put in place after some kind of cheating or clear-cut advantage evolves from a race shop or factory developer, and that in turn causes consternation from the innovators or athletes. But if you’re a privateer on the Lucas Oil Pro Motocross circuit, there was a small change to the rulebook for 2018 that really made a difference—especially if you’re one of the guys on the very bubble of qualifying for the 40-man main events.

And it all started rather quietly with a phone call from a privateer’s father. Carl Hand had some ideas for MX Sports Pro Racing and AMA Pro Racing on how things might go easier for the independent riders trying to make it in Lucas Oil Pro Motocross. As everyone knows, the odds are already stacked against privateers, what with the costs of racing, the rigors of the road, and even finding places to train and ride during the week, and then getting to the race and lining up against so much factory-backed talent. Carl Hand certainly knows all of this—he was a racer himself back in the day, as was his brother David. Now both have sons on the circuit, Jeremy and David, respectively, fighting to qualify every weekend. And that meant either posting one of the top 36 lap times in the two qualifying sessions or racing for a top-four finish in the LCQ sprints. With privateers most running in the B sessions, they often start the day on the muddiest conditions (though it’s a boon for them at Southwick or when it’s muddy like the Ironman) so a spot on the final 40-man starting gate can be a cutthroat business.

One of the things that always bothered Carl was the fact that while alternates were allowed to line up in the first moto if one of the 40 qualifiers failed to make it to the starting line, why weren’t they allowed to line up in the second moto and take an empty gate if a qualified rider fails to report for the second moto? After all, isn’t that a more likely scenario, as someone is bound to either breakdown or, worse, crash out of the first full-length moto?

For years the 41st and 42nd qualifiers have gone to the staging area before the first motos in the hopes that someone who qualified might not show up, but rare is the chance that a spot opens on the gate. And once the gate dropped on the first moto, the day was over for all but the 40 riders in each class. If they crashed out or broke down to the point where they couldn’t go to the second-moto starting gate, it meant that there would be an empty gate.

Carl’s point was plain: These guys are professionals, many have come a long way for a chance to race in the national, and they were on the track three times earlier in the day for qualifying sessions and the LCQ, and there is a sighting lap to boot, so why not let the top alternates stage for the second moto as well? He also pointed out that only having empty gates probably didn’t look good on TV, and he was right—RedBud only had 36 bikes on the line for the second 450 moto in 2017 that was aired live on NBC. Four more guys could have been out there gaining invaluable experience while also making for a better show, and also give a few more guys a chance at actually earning national points, which is no easy task.

When series referee Jeff Canfield was told of Hand’s suggestion, he went back and realized that they were often two or three empty gates for the second motos. Most startling was Glen Helen ’17, where only 35 guys lined up for the second moto in each class.

After some discussion with both the AMA and AMA Pro Racing, the idea was taken to the annual team managers meeting at the Daytona Supercross in March for their input. They had absolutely no problem with it—especially Forest Butler on the Rocky Mountain ATV/MC-WPS-KTM team, who once upon a time was that privateer who just missed the cut and had to watch the second motos go off with empty gates.

With everyone on board the rule was changed in the 2018 AMA Pro Racing Motocross Rulebook. Section 2 Race Rules and Procedures, subsection 2.16 Qualifying letter H now reads:

Five (5) Alternates will be designated from the results of the Consolation Race (e.g., positions 5 through 9). Seeded or qualified riders who fail to report to the start gate in either Moto 1 or Moto 2 may be replaced by an Alternate at the sole discretion of the Race Director. Once a rider is replaced by an Alternate they are no longer eligible to compete in the event.

As a result, this time around the starting gates for the second motos at Glen Helen were full. In fact, almost every round saw riders sit out the first moto all together but get to line up the second time out after a gate opened up, giving more guys a chance to race an actual AMA Pro Motocross National event.

The first rider to benefit was Garret Ioppolo of Lincoln, California. Riding a Roseville Yamaha with help from Haekser Racing Engines, he was slotted into the second 250 moto at Hangtown after Hayden Mellross did not make the start of the second moto. It was his first pro national moto, and he finished 35th. The next week at Glen Helen, the beneficiaries were Jacob Smith of Smith Racing and Nicholas Peterson, who hailed from Kansas City and got to race the second 450 moto. So far, it’s the one and only finish in the Vault for Frank Craven Racing-backed Peterson, but he’ll gladly take it.

At Muddy Creek in Tennessee, Mexico’s Felix Lopez got out there for the second 450 race, while Pennsylvania’s Benjamin Nelko and Connecticut’s Joshua Prior made it out for the second 250 race… You get the point. All were given a chance to race and earn a little bit of prize money, and also get their names in The Vault for AMA Pro Motocross.

There was one real complaint about Carl Hand’s alternate rule suggestion: Fantasy team owners had not accounted for the added names that popped up in the second motos!

So we’re giving this Roger for New Rule of the Year to Carl Hand for an idea that helped a bunch of young racers who otherwise might have gone home empty-handed had their still been those empty gates on the starting line.