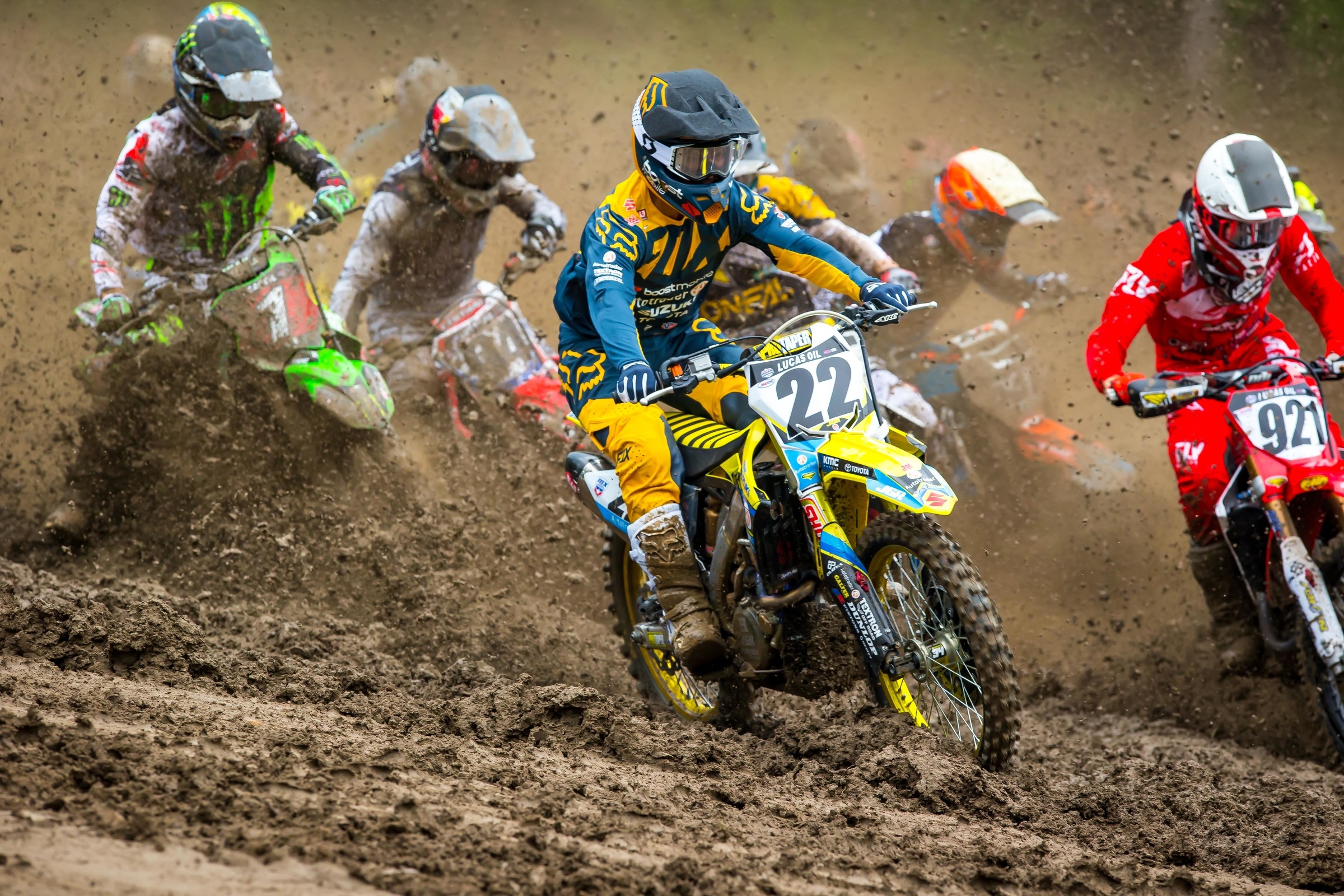 Throughout the month of December, Racer X Online editors and contributors will be handing out one award each day for an outstanding performance, effort or product related to the global motocross industry in 2018. Each winner will receive this award, which we’re calling a Roger, just like the Academy Awards have their Oscars. It’s in honor of Roger DeCoster, a great ambassador for the sport of motocross for more than 50 years. Today’s topic is Racer X Holeshot of the Year.

Chad Reed came to the Lucas Oil Pro Motocross season finale at Ironman National in Indiana without a lot of great big expectations. He was filling in for Weston Peick on the Autotrader/Yoshimura Suzuki Factory Racing team, riding his first outdoor national in three years. As you might recall it was a mudder—a very, very wet one—but Reed wasn’t too put off by it, as the 35-year-old veteran has seen more than his fair share of wet races. He qualified a decent seventh, just behind 2018 Monster Energy AMA Supercross Champion Jason Anderson.

But when he went to take his seventh pick on the swamped starting line, he realized that the far inside gate had a long, narrow patch of grass that had not been plowed up like the rest of the start stretch. Reed wheeled the #22 RM-Z450 into the far-right gate, waited for the card to go sideways, then pinned it and pointed the bike to the higher ground that was the grass. Holeshot!

Some 35 minutes later Reed splashed across the finish line in fifth-place, not bad for the oldest man on the track.

When it was time for the second moto, Reed would pick fifth behind Justin Barcia, Eli Tomac, Ken Roczen, and Marvin Musquin. He waited and watched as one by one they passed on the inside gate’s “hot line” that he had used so well in the first moto. When it was his turn to pick, he shouted, “I can’t believe you guys are going to let me have this gate again!”

They did, and Reed got another brilliant start, though not quite the holeshot. It did help keep him stay up there and finish eighth, and at the end of the day his experience in his muddy return to motocross left a big smile on his face. It also landed him a Roger for the 2018 Racer X Holeshot of the Year.

And if we were ever going to share a Roger, the co-Holeshot of the Year could have very easily gone to GEICO Honda’s RJ Hampshire, who saw what Reed did in the first 450 moto, then turned around and did it in the second 250 moto—before Reed did it for the second time.

By the way, Hampshire used the exact same technique to grab a key holeshot 51 weeks earlier, when he found a hard patch of dirt off to the side of the start stretch at the Monster Energy USGP at WW Ranch in Jacksonville, Florida. Hampshire went on to win that race in the MX2 class, his first victory as a professional.

Mud races like Ironman, though, make good starts especially helpful. Considering that, there is another candidate in TPJ/Fly Racing-backed Dylan Merriam. At both Unadilla and the Ironman—the two muddiest, nastiest races of the year—he pulled holeshots in 450 motos on a privateer Yamaha, against all of that factory equipment. He didn’t hold the leads for long, but he did get to stay clean a little longer than the other 39 guys he lined up with for those two motos!