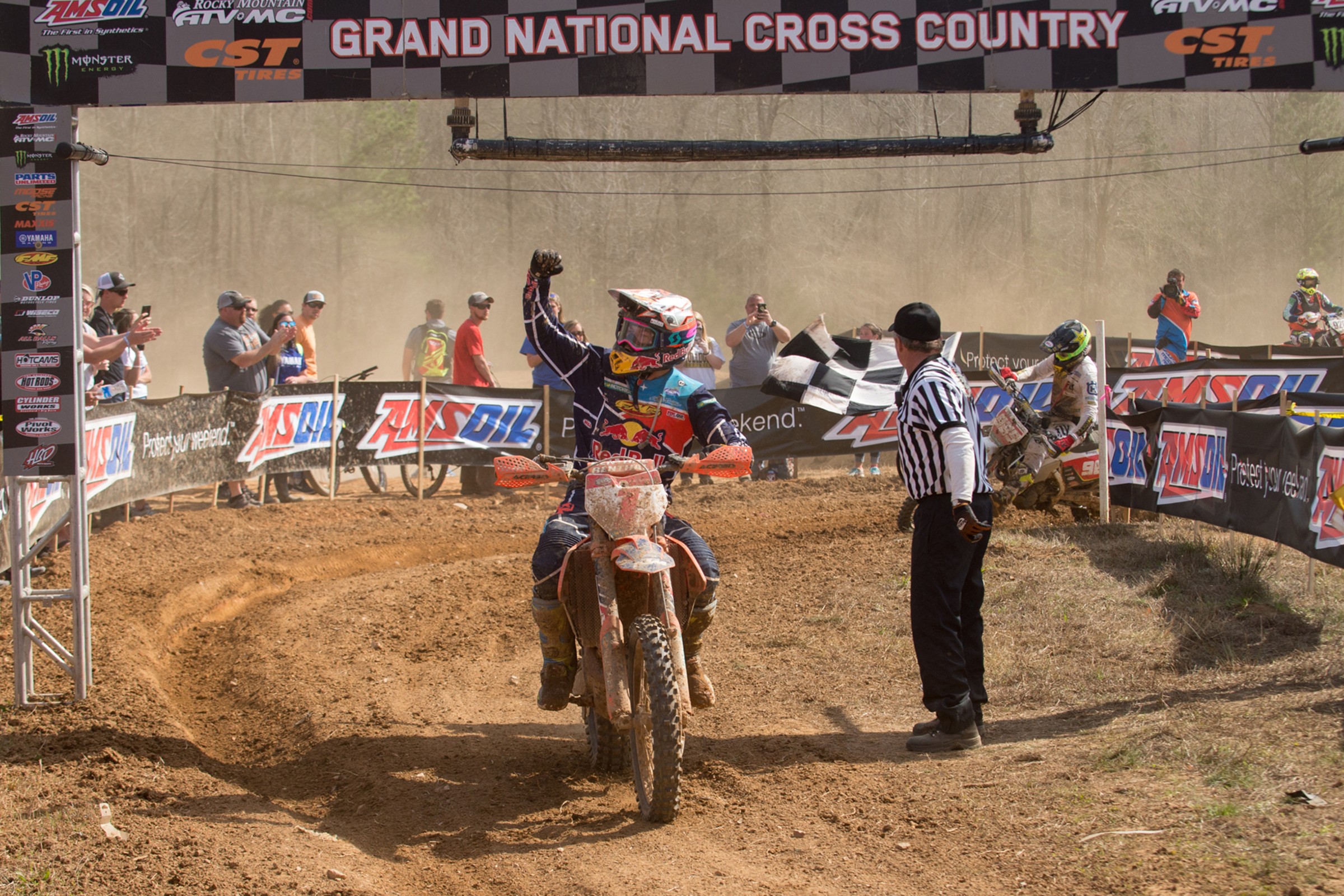 Throughout the month of December, Racer X Online editors and contributors will be handing out one award each day for an outstanding performance or effort or product related to the global motocross industry in 2018. Each winner will receive this award, which we’re calling a Roger, just like the Academy Awards have their Oscars. It’s in honor of Roger DeCoster, a great ambassador for the sport of motocross for more than 50 years. Today’s topic is Racer X Off-Roader of the Year.

It’s never simple to declare anyone as the best off-roader, because the nature, by nature, leads to massive variety between different series. The FIM Motocross World Championship, Lucas Oil Pro Motocross, and Monster Energy AMA Supercross look downright identical compared to the variety in off-road. Few series run the same format, and the terrain difference between the Eastern and Western U.S., let alone the rest of the world, presents a massive contrast.

So we go with the numbers, and Kailub Russell, by virtue of seven wins in the 12 races he entered, and a sixth-straight title in the Amsoil Grand National Cross Country Series, gets the nod as our Off-Roader of the Year.

We could close the case right here and move onto another award tomorrow, but explaining Russell’s talent and tenacity requires more than just explaining his GNCC success. Some of you are probably skeptical right now. Russell owns the all-time GNCC career win record and is the first rider to win six-straight titles in the series. Yup, nice honors, but Russell will never fully shake the specter that his dad Jeff is one of the main principals in the series (and in full disclosure, GNCC is owned by our sister company, Racer Productions). He’s also the only rider to ever win the GNCC and AMA National Enduro Championship in the same year, but, yet, the “He’s just a GNCC guy” stigma persists.

We live in the age of specialization. Russell grew up in the GNCC Series, and has made winning look routine since his youngest days (same for his primary rival, Thad Duvall, who won four races this year). Gone are the days when off-road titles were won by ex-motocrossers who jumped into the fray, or European World Enduro aces moving to the U.S. and showing some all-around game. Watching Russell battle Duvall in GNCC is just like watching Colton Haaker and Cody Webb go at it tooth and nail in EnduroCross. When EnduroCross started, it was all about the random guy like Ryan Hughes, John Dowd, or Taddy Blasuziak showing up and realizing “Hey, I’m good at this!”

This year, Russell tried to widen his scope by dabbling in the AMA Big 6 series out West. But an even larger switch took his true focus. For the last three summers, Russell has been training at Aldon Baker’s facility in Florida, primarily to get fitter and faster for his regular job. But all that focus on moto intensity led him to a new goal, as in actually racing some motocross.

This year, Baker and KTM gave him the green light, and Russell showed up to the Unadilla round of Lucas Oil Pro Motocross on a factory Red Bull KTM 450. Not raised as a motocrosser, this would serve as a real test. Is Russell really a great dirt bike racer, or just very skilled in one specific discipline?

With that kind of pressure hanging around, Kailub admitted to crazy nerves throughout the weekend. He tried to keep a low profile, but when the skies opened, everyone began to consider Russell’s mud-riding experience. I asked Roger DeCoster what he thought of his new rider, and he laughed, “He’s probably very happy about all this rain.”

Russell didn’t disappoint. In the muddy first moto, he started well and plodded forward, and when other riders had to stop for goggles, he moved into third place. He now wishes he had not read his pit board, though, because when he realized a podium was in play, the nerves got to him, and he crashed. He finished sixth.

In moto two, despite very little experience with gated starts, he started in fourth and was in the mix on lap one, until he got ran into by Justin Barcia. The impact snapped his brake pedal, and the moto went downhill from there. Russell crashed out, and the impact kept him out of scheduled appearances at Budds Creek and Ironman. He plodded through two more GNCCs to clinch the title, then ended his year early to get surgery.

The motocross goal was really one for his own personal bucket list; it no doubt also became a test of his all-around riding game. While the muddy motos muted the meaning of the results, the track was dry during practice, and Russell clocked the 12th fastest time in qualifying. Further, he looked like he belonged each time he was out on the track, and from all those Florida motos during the week, he had already earned the respect of riders like Marvin Musquin and Ken Roczen, who were happy to chat and race with him all weekend.

It would be great to see Russell give motocross another shot and see how he can do in dry conditions, but his Unadilla appearance, even in the mud, showed a willingness to leave regular surroundings and take on other specialists on their own turf. That alone proves something.

The other major American off-road series had even more variety—Italy’s Giacomo Redondi won the WORCS, but won just one race (Taylor Robert won all but one race he entered in the WORCS, but injuries cost him a title shot). Haaker and Webb waged war again in EnduroCross and split the wins in the six-race series, with Haaker emerging with his second title. Stew Baylor won a very competitive AMA National Enduro Championship.

Over in Europe, a new World Enduro Super Series was launched, taking a variety of those crazy one-off races and combining them into a single points championship. Billy Bolt emerged as the first-ever WESS Ultimate Enduro Champion, but the series went much as expected. A rider would win the event he specialized in, then struggle at the next, totally different race.

Off-road continues as always—a wide discipline that means many different things. These days, the beauty comes from watching all of the specialists raise the game in each discipline. Making some tracks at a different style of event is just icing on the cake.