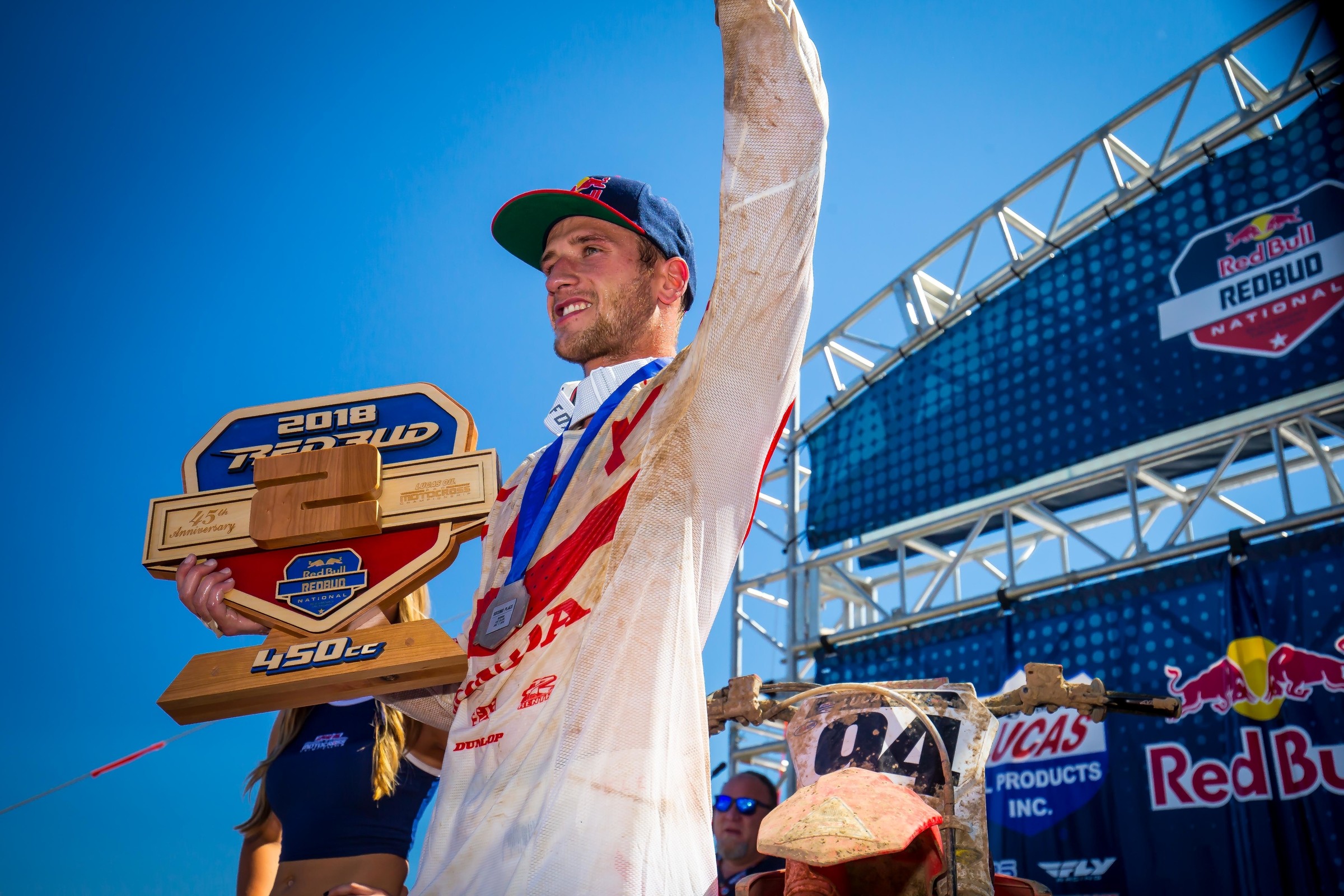 Throughout the month of December, Racer X Online editors and contributors will be handing out one award each day for an outstanding performance or effort or product related to the global motocross industry in 2018. Each winner will receive this award, which we’re calling a Roger, just like the Academy Awards have their Oscars. It’s in honor of Roger DeCoster, a great ambassador for the sport of motocross for more than 50 years. Today’s topic is Racer X Comeback Rider of the Year.

In nearly every possible way, this comeback was as good as it gets.

It also couldn’t have gone any worse.

Looking at the big picture, Ken Roczen is a riding miracle, and the fact that he’s even back on a dirt bike and competing at the highest level is a testament to many things. Ken’s commitment and determination, yes; Ken’s talent, of course; modern medicine, absolutely; and some plain old luck. Ken completely and totally destroyed his arm in a crash at Anaheim in January of 2017. He endured 11 surgeries to get back on a motorcycle. Somehow, there he was at Anaheim again in 2018, maybe not quite as good as he was before injury, but certainly not a shadow of himself.

Thanks in part to the confidence and bravado that just kind oozes out of him, it wasn’t impossible to envision Roczen possibly winning one of the Anaheim races, making for the ultimate full-circle feel-good story of triumph. Even Ken, though, couldn’t quite ignore the demons, and admitted he had some fears to sort through, especially at Anaheim 2, the first anniversary of his big crash. He rode terribly that night.

But terrible by Ken’s standards (ninth place) is still pretty good, and besides that race, he was riding very well. He was soon knocking on the door for a win, leading until the last lap in Oakland. He was second in points and about to go to the top, and then it all went straight to hell.

Leading into the 2018 season, Roczen and Cooper Webb had been beefing on social media, and as soon as they got on track for the new season, the residue showed, as Webb looked determined to show Kenny some attitude. In San Diego, both riders found themselves in the back of the pack early, and Webb stuffed an aggressive, but not dirty, pass on Kenny. Roczen went to pass him back immediately—as in the very next corner. He came in too hot, too far to the inside, and completely lost control of his bike.

Ken had worked so hard to control his emotions and approach the early rounds with caution. With one move, he undid all of that, literally, because as he crashed, his arm went straight into Webb’s rear wheel. Bones were completely displaced. He had now smashed up his good arm really badly.

It wasn’t quite as bad as his 2017 injury, but it certainly wasn’t good. Thus Kenny was on the long road back, again. He returned healed but unprepared for the Lucas Oil Pro Motocross opener at Hangtown, and struggled, but found himself leading laps against Eli Tomac the very next weekend at Glen Helen.

Considering his ailments—he even ran a T-Rex butt patch at times to make fun of his skinny arms—leading races and fighting for podiums was amazing. Kenny kept getting tantalizingly close to wins, including a moto win at RedBud, and leading right to the final stages at Washougal. That feel-good, full-circle overall victory never came, but he finished third in 450 points. It was a triumphant season, despite not containing any victories.

One more thing Kenny gets to look forward to now. He’ll be less of a story this time at Anaheim, as even to a rider so comfortable in the spotlight, the questions about the arm had grown a little thin. Perhaps this time Kenny will be even more relaxed, and can avoid another error. Let’s hope so, because he doesn’t have a third arm to break.

And if that breakthrough win, or title comes? He could be Comeback Rider of the Year, again. For now, we give him the award for 2018. It was certainly hard earned.