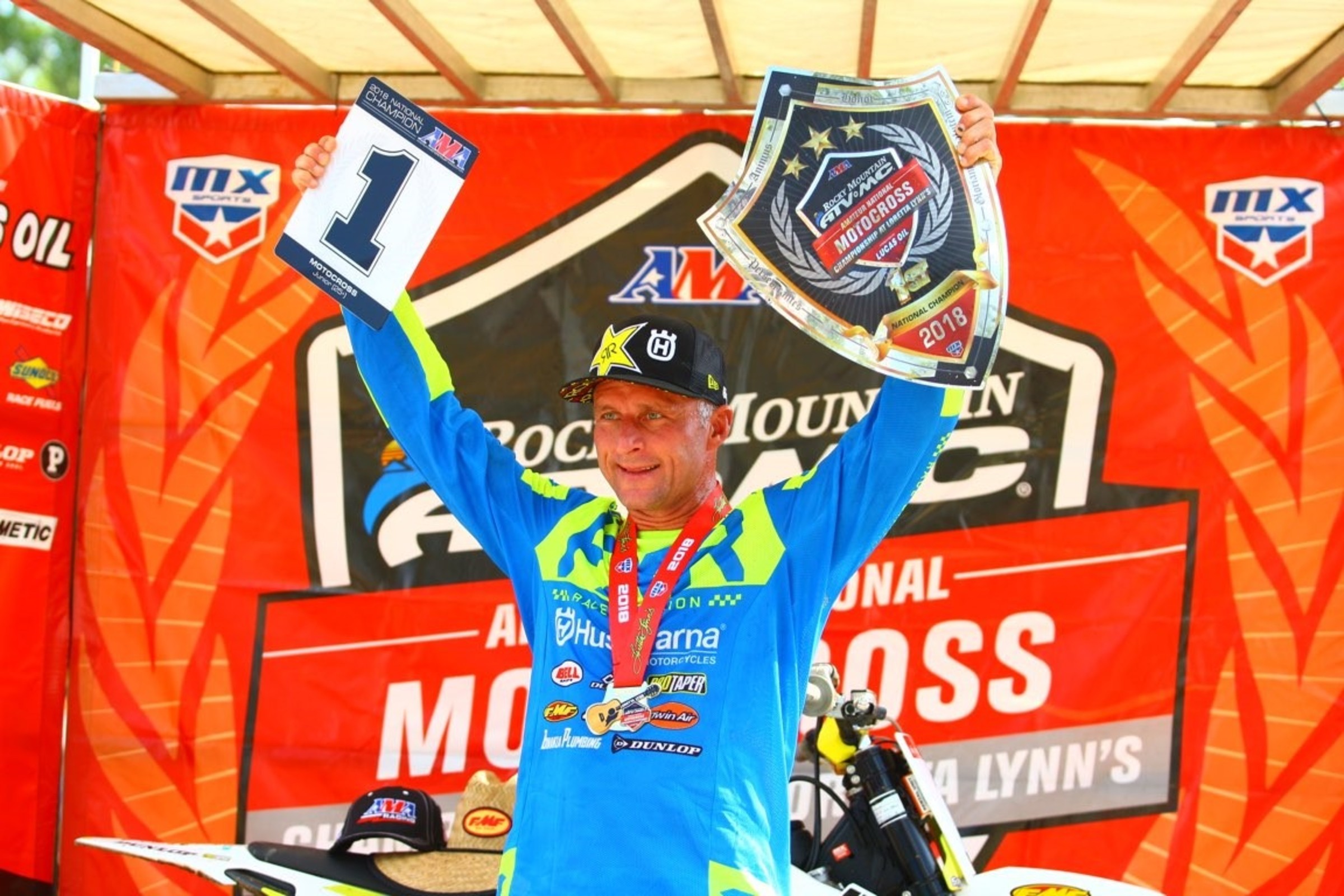 Throughout the month of December, Racer X Online editors and contributors will be handing out one award each day for an outstanding performance or effort or product related to the global motocross industry in 2018. Each winner will receive this award, which we’re calling a Roger, just like the Academy Awards have their Oscars. It’s in honor of Roger DeCoster, a great ambassador for the sport of motocross for more than 50 years. Today’s topic is Racer X Vet Rider of the Year.

Ever since the first Loretta Lynn’s AMA Amateur National Motocross Championship in 1982, what to do with ex-professional license holders in regard to the Vet classes has been a thorny issue. That year, 36-year-old Gordon Bowden, a former Grand Prix racer from Ireland, won the one and only Vet class—Senior +30. And Bowden wasn’t the only former pro out there, as Barry Higgins, the man who won the first two AMA Pro Motocross races in 1972, and so was Eyvand Boyesen, a man fortunate enough to race all over the world.

Ever since then, the debate has been between the sides that think “once a pro, always a pro,” and the side that believes that once your license lapses, and you’re more than a year past your last AMA Pro National or Supercross, then you are amateur once again. The solution that the AMA and MX Sports ultimately came up with is to have the former pros that are less than 49 years old be restricted to racing the Junior +25 class and Senior +40 and saving the Vet +30 and Senior +45 for sportsman riders who never held an AMA pro card.

And as a result, there’s been a veritable wing of the AMA Motorcycle Hall of Fame inductees that have raced the Vet classes at some point at Loretta Lynn’s after their professional days are behind them, including Marty Smith, Mark “Bomber” Barnett, Tony DiStefano, Gary Bailey, Jeff Emig, and even Ricky Carmichael. There’s also been such top ex-pro talent as Ron Tichenor, Tim Ferry, Sebastien Tortelli, Michael Byrne, and Austin Stroupe out there.

However, none of those guys have dominated the Vet class quite like 2001 AMA 125cc National Motocross Champion Mike Brown. Riding for Rockstar Energy Husqvarna, the all-around rider and seemingly eternally fast Brownie, who actually hails from Tennessee, has not only won the Junior +25 class the last two years, he’s won the Senior +40 division too. That’s because Mike Brown is now 46 years old! In both 2017 and this year, Brown battled with much younger guys in the Junior +25 class like Ricky Renner and  Levi Kilbarger to get those titles, as well as just running off with the Senior +40 class with some well-known longtime amateurs like John Grewe and Barry Carsten, who would be perennial contenders for Racer X Vet Rider of the Year because they battle constantly, not only in the Senior +40 class but the Masters +50 as well!

Mike Brown rides alone out front, and he’s added four AMA Amateur National Championships to the ones who won at Loretta Lynn’s in ‘80s and early ‘90s when he was just a local amateur prospect coming up through the ranks. His titles at Loretta’s and his results at the other races he competed in, is why we’re giving this old pro the Roger as our 2018 Racer X Vet Rider of the Year.