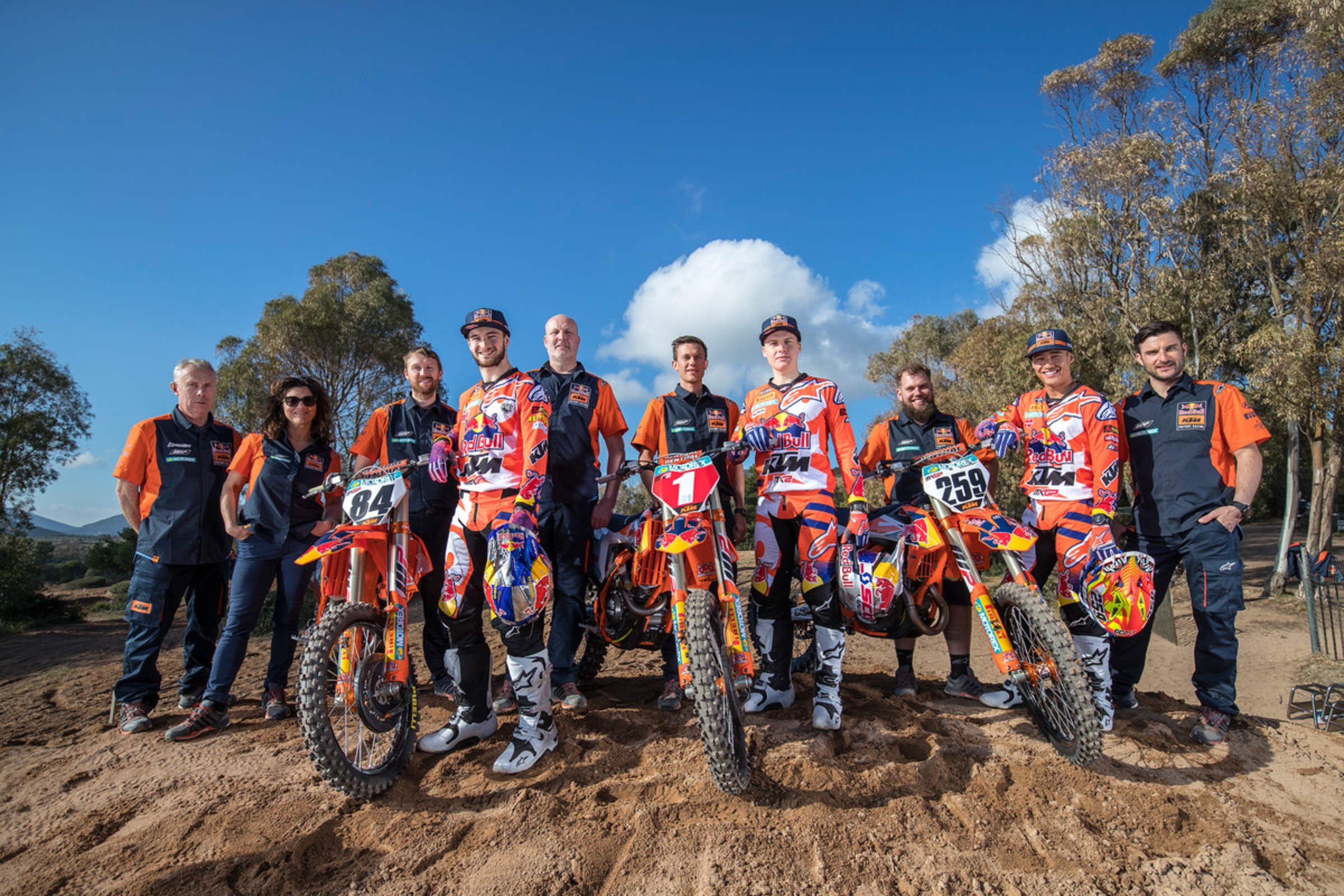 Throughout the month of December, Racer X Online editors and contributors will be handing out one award each day for an outstanding performance or effort or product related to the global motocross industry in 2018. Each winner will receive this award, which we’re calling a Roger, just like the Academy Awards have their Oscars. It’s in honor of Roger DeCoster, a great ambassador for the sport of motocross for more than 50 years. Our first Roger goes to Racer X’s 2018 Team of the Year…

Not so in Europe. With the wrecking balls of Jeffrey Herlings in MXGP and Jorge Prado in MX2, as well as their respective running mates Pauls Jonass (Herlings' MX2 understudy) and Antonio Cairoli (Prado's mentor) Red Bull KTM Factory Racing in Europe absolutely dominated the FIM Motocross World Championship. In MXGP, Herlings won an astonishing 17 overalls of the 19 rounds he raced; Cairoli won the two races Herlings didn't. KTM also won 39 of the 40 motos. Only Kawasaki rider Clement Desalle was able to pry a moto win and an overall away from the Orangemen in Russia.

In MX2, KTM wasn't quite as dominant, as the 17-year-old champion Prado won 12, which was more than half the races himself, and Jonass, injured for a time, managed to take five, leading just three overalls for everyone else, and seven of the 40 motos.

Add it all up and KTM won 72 of 80 motos in the 2018 FIM Motocross World Championship, were 1-2 in both classes, and had a moto-winning percentage of an astonishing 90 percent. No brand has ever dominated a series in both divisions like KTM in Europe did this year.

We asked our man in Europe, Adam Wheeler, to break down how the structure of the team works.

“It is very much one team—Red Bull KTM Factory Racing, overseen by former Grand Prix title contender Pit Beirer—but Cairoli and Herlings each have a “crew chief” in Claudio De Carli and Dirk Gruebel,” explains Wheeler. “It’s almost like a road racing team: one entity with two factions. The 17-year-old Prado also fell under the De Carli wing, and to fantastic effect, though a lot of his performance was simply down to his physical maturation, not vastly different working methods, while Jonass was also with Gruebel, as was Glenn Coldenhoff.”

And of course Coldenhoff brings us to the clincher: Red Bull KTM Factory Racing also swept all three motos in the 2018 Monster Energy FIM Motocross of Nations at RedBud; Coldenhoff taking two wins as Holland’s Open rider, Herlings one as Holland’s MXGP entrant, and the Spaniard Prado won the MX2 class outright.

“They go to great pains to stress they are one team,” says Wheeler of the star-packed Red Bull KTM Factory Racing effort. “There is only one thin and flimsy partition between the bikes and they all share the riders area in the middle of the awning.”

Somehow, they made it all work—and work extremely well—in 2018.

One stat to add from Wheeler, throwing Husqvarna into the math: “From 40 Grands Prix (20 in MXGP, 20 in MX2) Austrian-manufactured technology won 38 times. Only Desalle and Honda rider Calvin Vlaanderen gave the Japanese hope. Has anything like that ever happened before?!”

Never. That’s why Red Bull KTM Factory Racing, which won the vast majority of those races, wins the first Roger as Racer X’s 2018 Team of the Year.