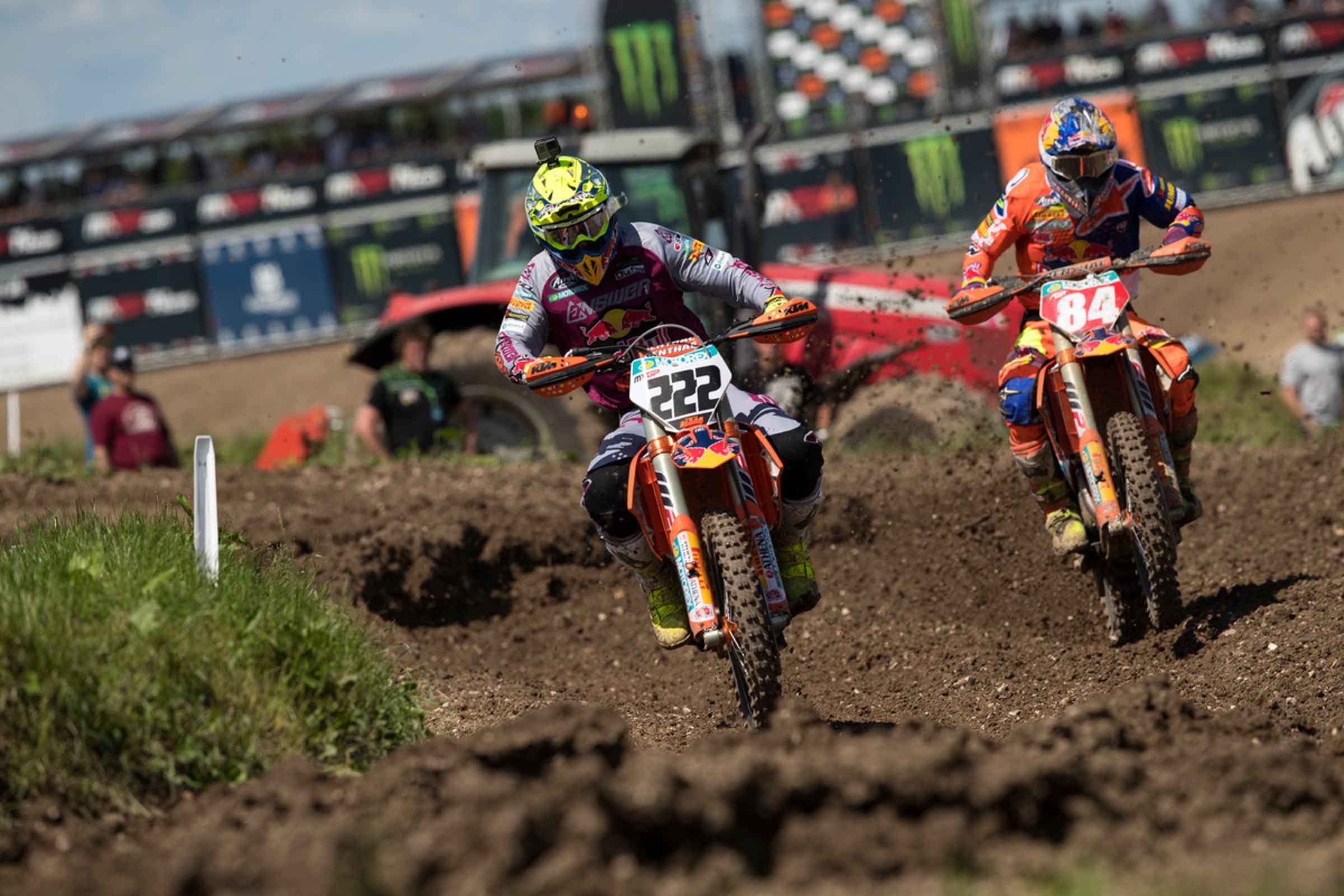 Throughout the month of December, Racer X Online editors and contributors will be handing out one award each day for an outstanding performance or effort or product related to the global motocross industry in 2018. Each winner will receive this award, which we’re calling a Roger, just like the Academy Awards have their Oscars. It’s in honor of Roger DeCoster, a great ambassador for the sport of motocross for more than 50 years. Today’s topic is Racer X MXGP Race of the Year.

One could argue that the greatest rivalry in motocross right now takes place not in the U.S., but in Europe, where Red Bull KTM teammates Jeffrey Herlings and Antonio Cairoli have taken control of the FIM Motocross World Championship. Things have not always been rosy between the two heavyweights, but there has always been a level of respect. That changed a bit at round nine of the 2018 championship at Matterley Basin, host of the 2017 Motocross of Nations.

After a series of fantastic battles early in the season, Herlings began to pull away in the MXGP standings until suffering a broken collarbone in a practice crash. Cairoli had his opening, but then suffered a thumb injury while Herlings was out. Herlings returned for round nine with a commanding 48-point lead over the nine-time world champion, but the race would prove pivotal. In the first moto at the MXGP of Great Britain, things came to a boil, as Cairoli shot off to the early lead, only to have Herlings run him down near the end of the moto. Herlings made a dash to the lead around the 2:00 minute mark, only to see Cairoli fight back and retake the lead with under 2 minutes left on the clock.

With two laps remaining, Herlings pushed to the inside of Cairoli and initiated contact. Cairoli went down, while Herlings raced off to yet another moto win. He went on to take the second moto to capture his seventh win from nine, and 14th moto win from 18 (at the time).

Racer X European contributor Adam Wheeler summed up the battle after the race:

It was the first flashpoint of a face-off that will only bubble and boil. Uncharacteristically, Cairoli skipped the post-race press conference due to an early flight out of the U.K. (and for a brief trip home before he tests an F1 car in Austria on Wednesday) and didn't give his side of events, but it was clear from his reaction and evident disappointment while peeling off the track in the second moto (where he had been similarly debunked) as they rode to the podium area—he didn't acknowledge Herlings at all—that this was a heavy defeat to take. His words in the KTM press release illustrated as much: “It’s a shame to lead 25 of the 28 laps without winning the Grand Prix."

Herlings gave credit. “I don't think there is anyone on our level in the world at the moment,” he remarked. “He is a nine-time world champ for a reason. You can win one title with a bit of luck, but never nine! He is one of the best riders in the sport. He is still at the top at 32 and I don't think he has ridden better than he has now. Luckily I was able to pull it off today. I didn't want to ride the whole second moto in his roost.

“I wanted to go for the pass on the inside and we touched with elbows and then we touched once more,” he said of the first race incident. “It was definitely not my intention to touch… but I think they watered that part. I was really sliding. It was a small touch, almost nothing.”

Instead, Herlings was glowing with the feat of another MXGP success and the humbling of a fast and experienced set of peers. “Don't ask me how, but we did it today,” he said. “It was an amazing fight and a great way to get to 100 podiums. He [Cairoli] started to lose the pace three or four laps before the end of the first moto and I thought it would be worse [for him] in the second moto, but… the guy is in good shape. We kept going to the last lap, and I had to catch a gap of three or four seconds. I think it was an amazing race to watch.”

Herlings would eventually take control of the title chase, putting together a truly historic season, garnering 17 wins from 20 (19 that he entered), 15 of those 1-1s, and a 100 percent podium record (never finishing out of the top two overall), but this race between the two title rivals was the best of the MXGP season and for that we award it the Roger for MXGP Race of the Year.