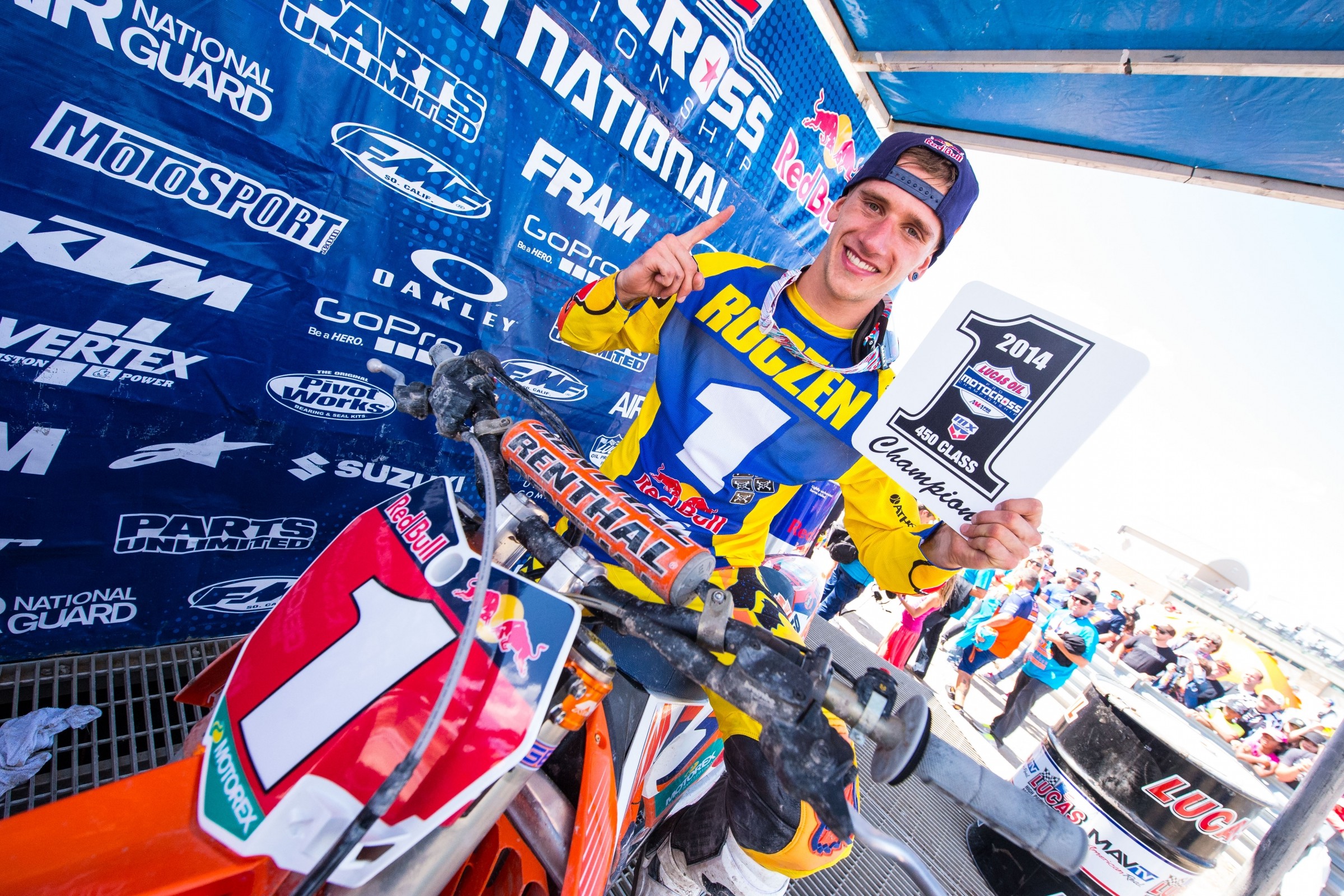 The 2018 Lucas Oil Pro Motocross Championship, sanctioned by AMA Pro Racing, is now just 15 days away! The 50th Annual Hangtown Classic, just outside of Sacramento, California, will go off the starting gate on May 19.

The distinction of being the highest debut on this NBC Sports Gold list of the 30 Greatest Motocrossers in AMA history belongs to #15, Ken Roczen. The Germany-born Honda HRC factory rider was already an FIM MX2 Motocross World Champion before he moved to America full time in 2012. Roczen rocketed to the top of the Lucas Oil Pro Motocross Championship in both 2014 and 2016. He did it the first time aboard a Red Bull KTM, topping his veteran teammate Ryan Dungey in the process, and then he rode to the top of the point standings again in 2016 while riding for the now-defunct RCH Racing Suzuki team. Those two 450 MX titles put him in rare company here in the U.S., this time over Eli Tomac and former two-time FIM MX2 World Champion Marvin Musquin of France.

Unfortunately, Roczen could not defend that title last season after suffering a terrible crash while leading the 2017 AMA Supercross Championship with his latest team, Honda HRC. When he begins the 2018 Lucas Oil Pro Motocross Championship at Hangtown on May 19 at the 50th Annual Hangtown Motocross Classic, it will mark his first outdoor race since he swept the last three rounds of the 2016 series.

Born in April 1994, Roczen grew up as something of a prodigy in Europe, racing Suzukis mostly from his home in the eastern part of Germany. He was a frequent visitor to many of the big races on the continent, and even came to America at age 13 to compete in the Intermediate classes at the Loretta Lynn’s AMA Amateur National Motocross Championship. He did not win, but he served notice to the industry that his ultimate plan was to someday conquer American supercross and motocross.

He turned professional as soon as he celebrated his 15th birthday (the minimum age in Europe) and seven weeks later became the youngest Grand Prix winner ever in the FIM Motocross World Motocross Championship, grabbing his maiden win his German GP in 2009. The next year he was the runner-up in the MX2 division to the aforementioned Musquin, and then the next year he was crowned Germany’s first FIM Motocross World Champion since Paul Friedrichs in the 1960s. Then Roczen moved to America and immediately became a contender.

Although a couple of seasons here were cut short (or completely wiped out) by injuries, Roczen has accumulated 17 Pro Motocross wins, all but two of which were in the 450 MX division. He also has put together 45 total podiums in Lucas Oil Pro Motocross. But most important are his two 450 Pro Motocross Championships and, after another injury knocked him out of much of this year’s AMA Supercross season, he and Team Honda will be well-motivated to get a third title this summer, because the last (and only) time a Honda CRF450 won this championship was way back in 2004 when Ricky Carmichael swept all 24 motos in his swan song with Team Honda.