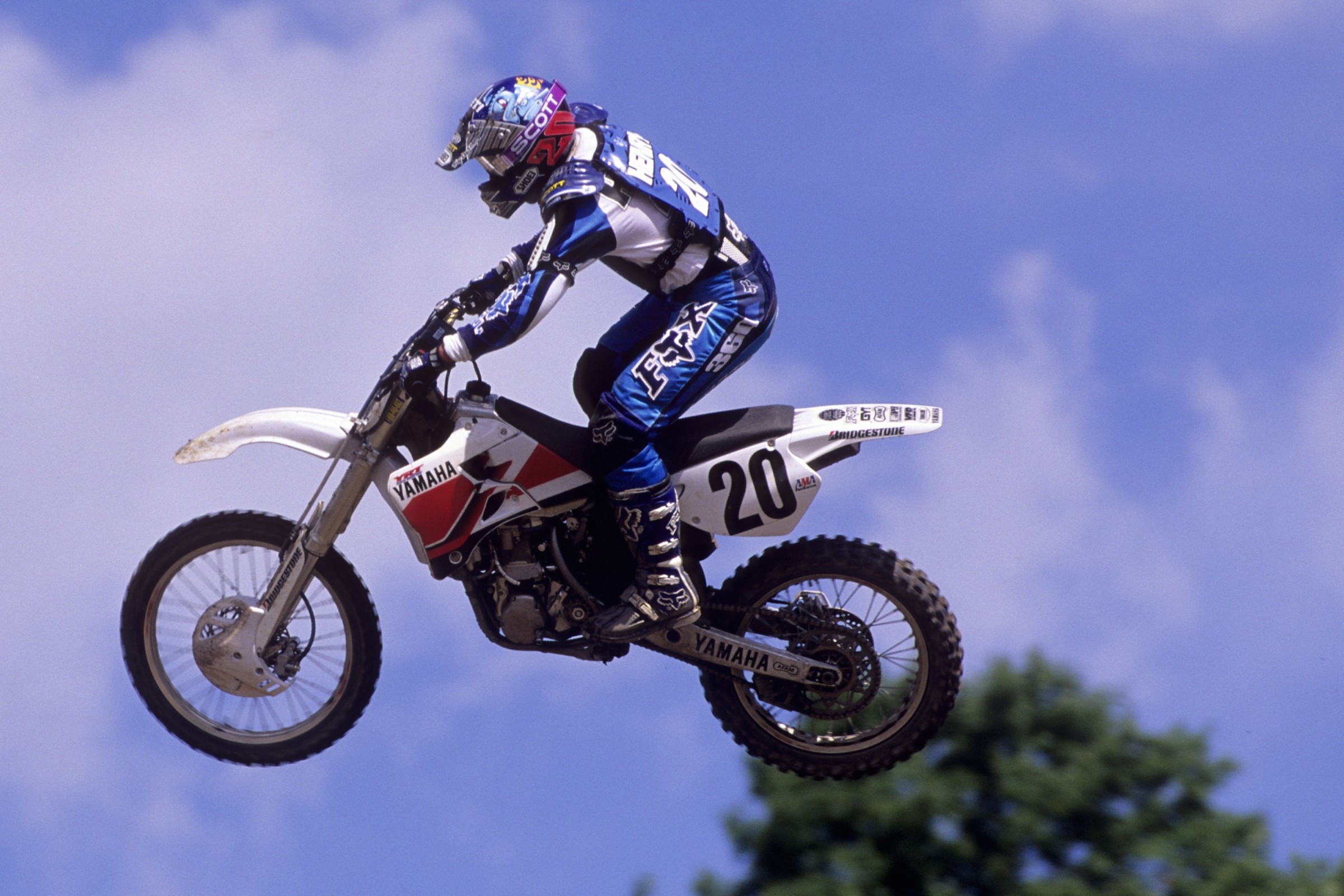 The 2018 Lucas Oil Pro Motocross Championship, sanctioned by AMA Pro Racing, is now just 16 days away! The 50th Annual Hangtown Classic, just outside of Sacramento, California, will go off the starting gate on May 19.

Doug Henry is another American motocross folk hero—a rider whose popularity and influence outstrip his actual successes, even though he was a three-time AMA Motocross Champion and the winner of 14 outdoor Nationals. He was a fast man with a huge heart.

Henry arrived on the scene in the late eighties, having risen from the rough-and-tumble world of NESC motocross along with his friendly rival John Dowd. Both landed on the National map in a big way when they swept the 125 and 250 Classes, respectively, at the notoriously wet 1991 Hangtown National. (How wet was it? Race officials called it a day after the first set of motos because a river was running down through the middle of the Prairie City OHRV Park!) Henry's results soon rose just like the water in the infield did, and by 1993 he had caught the attention of Team Honda, which was looking for a rebuild of its 125cc program after Mitch Payton's Peak/Pro Circuit team switched over to Kawasakis during the off-season.

Henry would deliver immediately in the form of a 125 East Region SX title, but more importantly, he was able to beat defending champion Jeff Emig for the AMA 125 National Motocross Championship, as well as his own Honda teammate Jeremy McGrath. Wearing the #1 plate in 1994, Henry defended his 125cc title, bettering another Honda teammate in Steve Lamson.

For 1995, Honda moved Henry up to its 250 program alongside McGrath, and shortly after winning his first career 250 Supercross in Dallas, he appeared ready to carry his momentum through the summer in an attempt to win a third straight outdoor title. He won the High Point National at Mt. Morris, but at the very next round in Budds Creek, he suffered one of the most horrific crashes ever seen in motocross, launching his CR250 off the top of a steep Maryland hill after slipping off the back of his seat and twisting the throttle back in trying to hang on. He landed some five stories below, breaking his back and maybe even ending his career.

After some difficult surgeries, in which doctors inserted a cage around his damaged vertebrae, Henry made a miraculous comeback just eight months later and rejoined the SX tour, only now he was on a Yamaha.

Come 1997, Henry was looking great in supercross, piloting a YZ250 and leading the points when he collided with Jimmy Button in the Houston Astrodome and snapped his wrist. By this point, Henry was helping test Yamaha's experimental YZ400, having raced it at a couple of the early outdoor rounds. When it was time for one last supercross race to complete the schedule, the former points leader decided to enter the YZ400 and see how the bike held up in a stadium. History knows the outcome: Doug Henry won the main event, the first man ever to win an AMA Supercross on a four-stroke.

Henry might have ridden that thumper to a first-ever outdoor win too if not for another nasty crash, again at Budds Creek, where the bike cut out on the face of what used to be called “the Big Gulp” uphill double. This time he broke both wrists, and his career seemed once again to be on the verge of ending.

Henry's last date with destiny would come in 1998, where he became not only the first rider to win an outdoor National on a four-stroke, but the first to win an AMA National Motocross Championship as well. He won five of the 12 rounds, his first victory coming at Southwick in the 250 Class as his old friend John Dowd, also riding for Team Yamaha, was winning the 125 class.

One year later, Henry decided it was time to call it quits, but not after adding his 14th and final outdoor win at the Kenworthy's round. (He skipped most of the SX tour that year.) He would come back from time to time just for fun at Southwick, once pulling in with his bike in the back of his pickup truck and then going out and finishing fifth overall.

Unfortunately, in the winter 2007, Doug Henry crashed while doing a Supermoto event in Florida and broke his back again, this time with paralysis. Since then, Henry has won several medals in the X Games' Adaptive events on motorcycles, as well as snowmobiles (he rides his bike with a protective roll cage attached).

Another working class guy of this sport, Doug Henry is the epitome of a hero. If this were a measure of just heart, he might have a lock on the top spot. And he's #16 on this list of NBC Sports Gold 30 Greatest AMA Motocrossers.

Want to follow Doug Henry's results through the years? Check out his place in the Racer X Vault.