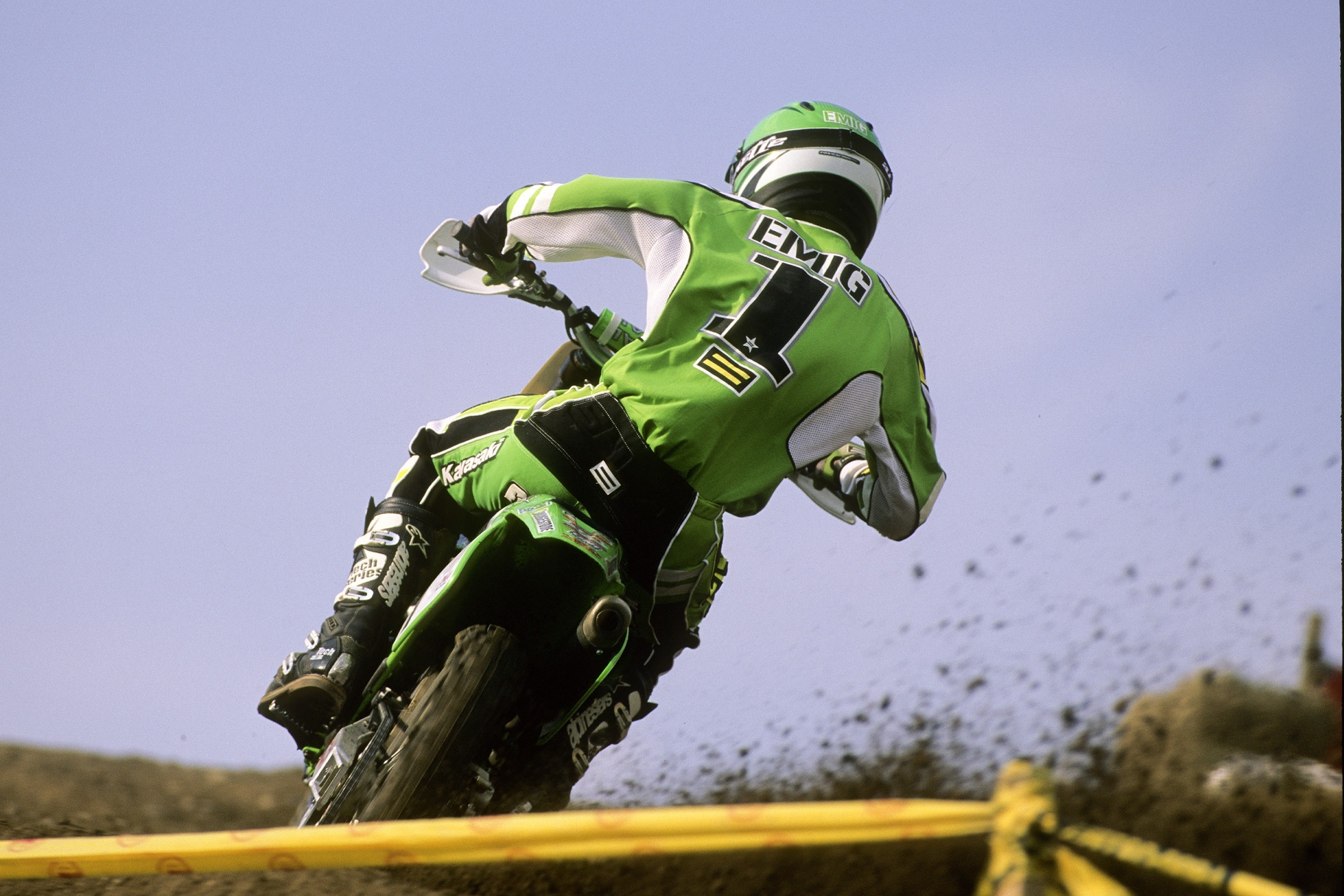 The 2018 Lucas Oil Pro Motocross Championship, sanctioned by AMA Pro Racing, is now just 11 days away! The 50th Annual Hangtown Classic, just outside of Sacramento, California, will go off the starting gate on May 19.

Five years ago, on the eve of the 2013 outdoor season, the editors and contributors of Racer X Online did a countdown of the 30 Greatest AMA Motocrossers of all time, ranking the best riders on the AMA Motocross circuit. You can check out that list right  here .

More than any other rider in American motocross, Jeff Emig epitomized the nineties—the outdoors, anyway. A superbly talented minicycle racer from the Midwest, Emig moved out West as a teenager and grew into a world-class motocrosser, winning three outdoor titles and 29 Nationals. And he held his hand up to ride for Team USA every time he was asked, winning three times and losing three. Emig also lost his way for a time, seemingly caught up in the lifestyle that came with his success. For a while he succumbed to the pressures of stardom and the constant expectations that came with not only being the best outdoor motocross rider for a certain time, but also the second-best supercrosser on the planet behind his nemesis, Jeremy McGrath. Given his wins, his titles, his pure talent, and more, Jeff Emig is #11 on this list of NBC Sports Gold's 30 Greatest AMA Motocrossers.

Emig was a Team Green kid who grew up in a racing family from Kansas City. His father, Gary, actually named him Cam—as in “camshaft” (Jeff is his middle name)—and Emig was soon on the fast track to a factory ride. The day Emig turned pro—August 28, 1988—he actually led much of the first moto of the Washougal National.

In 1991, Emig moved over to Team Yamaha and immediately started paying dividends. The following year, he engaged in an epic battle with Mike LaRocco for the 125 National Championship, coming from more than 60 points back in the middle of the series to win going away in an all-or-nothing showdown at the last round at Budds Creek.

The following two seasons, Emig stayed in the 125 Class against his wishes, as Damon Bradshaw was Yamaha's main man there. Emig narrowly lost the '93 title to Doug Henry by nine points, then crashed out of contention for the '94 title. He was finally able to move up in 1995, and he finished a distant second to McGrath in 250 motocross.

Emig surprised many that off-season when he left Yamaha for the chance to replace veterans Mike LaRocco and Mike Kiedrowski and be the main man. After struggling at first through supercross, Emig began to find his form and confidence, when he beat McGrath at the St. Louis SX, keeping Jeremy from the perfect season. He carried that momentum over to the outdoors and started challenging McGrath for wins. When Jeremy was injured at Millville, Emig made his move and reeled him in on the points table. When it all came down to another last-race, winner-take-all scenario, Emig delivered with a triumphant win at the Steel City finale to take the 250 National Championship and the #1 plate away from Jeremy.

Emig's best season as a racer was 1997. He won both the AMA 250 Supercross and 250 Motocross titles to assert himself as the best rider in the world, only to go to the Motocross of Nations in Belgium and literally get trounced. He began to seem a little distracted—and maybe he was, working on the ill-fated cult classic motocross film Frezno Smooth , which spoofed the very lifestyle he and many others were living in those crusty demon days of the late nineties. His charisma and his attitude made him a popular athlete, and his fans often showed up at the races wearing afro wigs based on his “Fro” nickname. There was even a Shift MX ad spoofing Emig with Jeff in a hot tub with a bunch of girls on the roof of the MGM Grand, all of them wearing afro wigs.

However, the following year Emig failed to hold either of his #1 plates. His SX defense was a pretty much a disaster, and motocross started out badly as well. But he then seemed to find his footing and reel off four 250 National wins, only to break his thumb just as he was making up real ground on eventual champion Doug Henry.

It was in 1999 that Emig's career went completely off the rails. He couldn't get things going in supercross and eventually took his leave from the tour, only to return for the last race in Las Vegas and finish third. When outdoors started up, he was not his usual self—he had a hard time cracking the top five—and that led to whispers that he was burned out and no longer taking the craft of racing seriously. His bosses at Kawasaki had probably reached their wits’ end when Emig made a big mistake: While partying during an off-weekend in August in Lake Havasu, he was arrested walking down the road in possession of drug paraphernalia in the form of a soda can that had been fashioned into a pipe. Kawasaki fired him almost immediately.

Emig's career did not end there. He rededicated himself to racing, took a privateer Yamaha with support from FMF to the U.S. Open in Las Vegas, and shocked everyone by winning the $100,000 winner's prize. He began building out a team for a comeback in the 2000 AMA Supercross Championship, only to break both wrists on New Year's Eve while training.

Emig tried to make another comeback outdoors and was looking forward to redeeming himself at Hangtown when he crashed heavily while practicing at Glen Helen and broke his leg and back. The injuries were serious enough for Emig to make the difficult decision to call it quits that summer after a dozen years on the circuit.

In the years since he stopped racing professionally, Emig has remained in the spotlight, racing occasionally at amateur races like Loretta Lynn's, working with his sponsors like Shift and Husqvarna, and doing color commentary for Monster Energy Supercross.

For his three outdoor titles and 29 National wins—which came in a very tough time competitively—as well as his diverse talents, Jeff Emig is #11 on NBC Sports Gold's 30 Greatest AMA Motocrossers. Tomorrow, we get into the top ten.

You can check out all of Jeff Emig's race results, both outdoors and indoors, in the Racer X Vault.