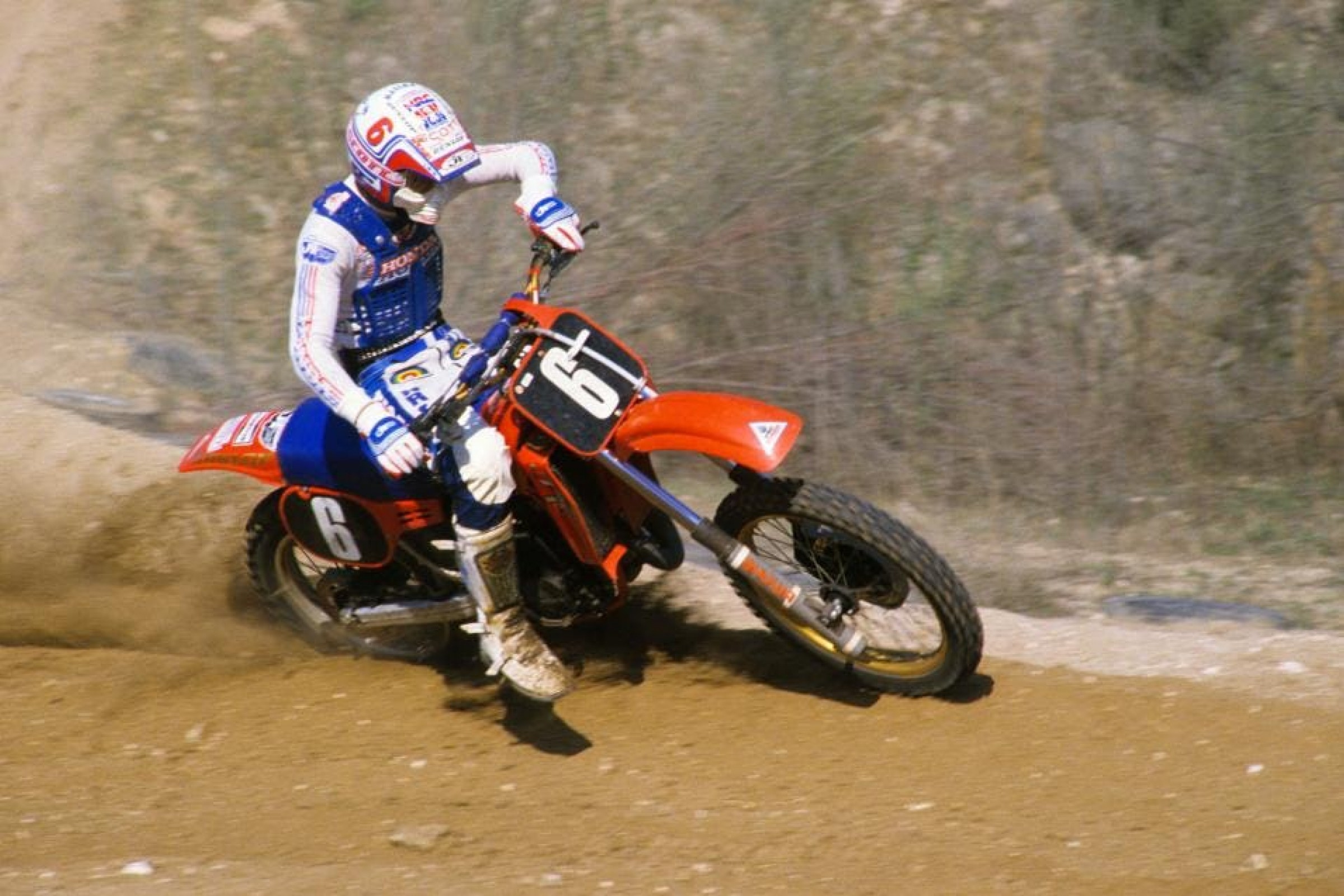 The 2018 Lucas Oil Pro Motocross Championship, sanctioned by AMA Pro Racing, is now just 21 days away! The 50th Annual Hangtown Classic, just outside of Sacramento, California, will go off the starting gate on May 19.

The NBC Sports Gold 30 Greatest AMA Motocrossers countdown is getting serious. For instance, yesterday's #22, Jean-Michel Bayle, is considered a legend on both sides of the pond, both indoors and outdoors, and his innovations are timeless. How can JMB possibly be #22?

There are too many things—for better and for worse—to say about Ron Lechien, a bona fide motocross legend/folk hero/cautionary tale. We'll start with the good: From the moment Lechien showed up on the national radar as the 14-year-old winner of Mammoth Mountain's 125 Pro class, people talked about the El Cajon kid as if he were bigger than life. Ronnie was tall, technically precise, and astonishingly fast. Like fellow San Diego-area talents Marty Smith, Marty Tripes, Broc Glover, Scott Burnworth, and Ricky Johnson, Lechien—by now nicknamed “Dogger” (either because he was so laid back, or because le chien means “the dog” in French)—just looked so natural and so good on a motorcycle that he appeared to not even be trying.

By the time he turned pro in 1983 he was a Yamaha factory pilot, and the team threw him right into the deep end of AMA Supercross (there wasn't a 125 SX class back then). Lechien responded by winning the Orlando SX, an amazing feat considering he was still 16 and still in public high school. Outdoors, on a 125, he was tasked with competing against one of the most talented lineups of all time: Mark Barnett, Jeff Ward, Johnny O'Mara, Brian Myerscough, and more. Lechien won three of the last five rounds and finished the series in fourth.

After being raised by Yamaha, Lechien was snatched away by Honda, then moved up to the 250 class full-time because they had O'Mara as the defending 125 National champ. Lechien won three rounds and finished just eight points behind his old Yamaha teammate and El Cajon rival Ricky Johnson.

Here's where things started to go sideways—the bad, if you will. Lechien had also started running with a faster crowd off the track, and whispers about excessive partying (and not just drinking) started to gain traction. Nevertheless, he went out and completely dominated the 125 Nationals in 1985, winning seven of the nine rounds he entered, only losing Gatorback to Suzuki's George Holland after his bike seized and High Point to Erik Kehoe after a flat tire. He also barely lost the SX title, just six points behind the veteran Ward, with Glover in between.

That fall, Lechien's career took a detour when he was arrested for marijuana possession at the Tokyo airport. Honda summarily fired him, though he quickly found a home at Kawasaki for 1986. He moved up to the 250 and 500 classes outdoors but he didn't win a single race.

Through 1987 and 1988 with Kawasaki, Lechien was back up to speed, and when he was on his game, he was as fast as anyone on either a 250 or 500. He picked up a few wins in 1987, as well as another notorious incident when he was DQ'd from the 125cc U.S. Grand Prix after oversleeping and missing mandatory registration. He finished second and third in 1988 in the 500cc and 250cc nationals, respectively, and second again in supercross—a finish he would repeat in '89, albeit without winning a race. Lechien was still fast, but he just wasn't the same dominant rider. The Dogger was losing steam. He won his last AMA Motocross race at Kenworthys in Ohio on July 16, 1989.

The ugly got really, really ugly. Lechien broke his leg at Steel City that fall, then fell into more partying, more arrests, more problems. He tried a comeback with Tuf Racing, and even briefly tried Europe, but he was his own worst enemy. The old cliché fit: He had talent to burn, so he went out and burned out. By the mid-nineties he was doing time in prison.

Fortunately, there is a happy ending. After bottoming out, Lechien began a truly remarkable comeback. Not as a professional racer—those days were long gone—but as a person. He's worked his way back into motocross at Maxima Oil, the company founded by his father. The work he's done to get his act together—and keep it together—is as impressive as his racing success was once upon a time.

Like Jean-Michel Bayle, we'll never know how good Ron Lechien might have been—while Bayle left for road racing, Lechien simply left a lot on the table. He scored 44 podiums spread evenly among each class (17 on 250s, 16 on 125s, 11 on 500s), making him one of the few riders with equal ability on any bike. And 18 national wins in the deep ocean of talent that was the eighties, not to mention that one dominant championship run, land the Dogger on our list of Greatest AMA Motocrossers at #21.

You can check out all of Ron Lechien's career finishes in both outdoor motocross and supercross in the Racer X Vault.