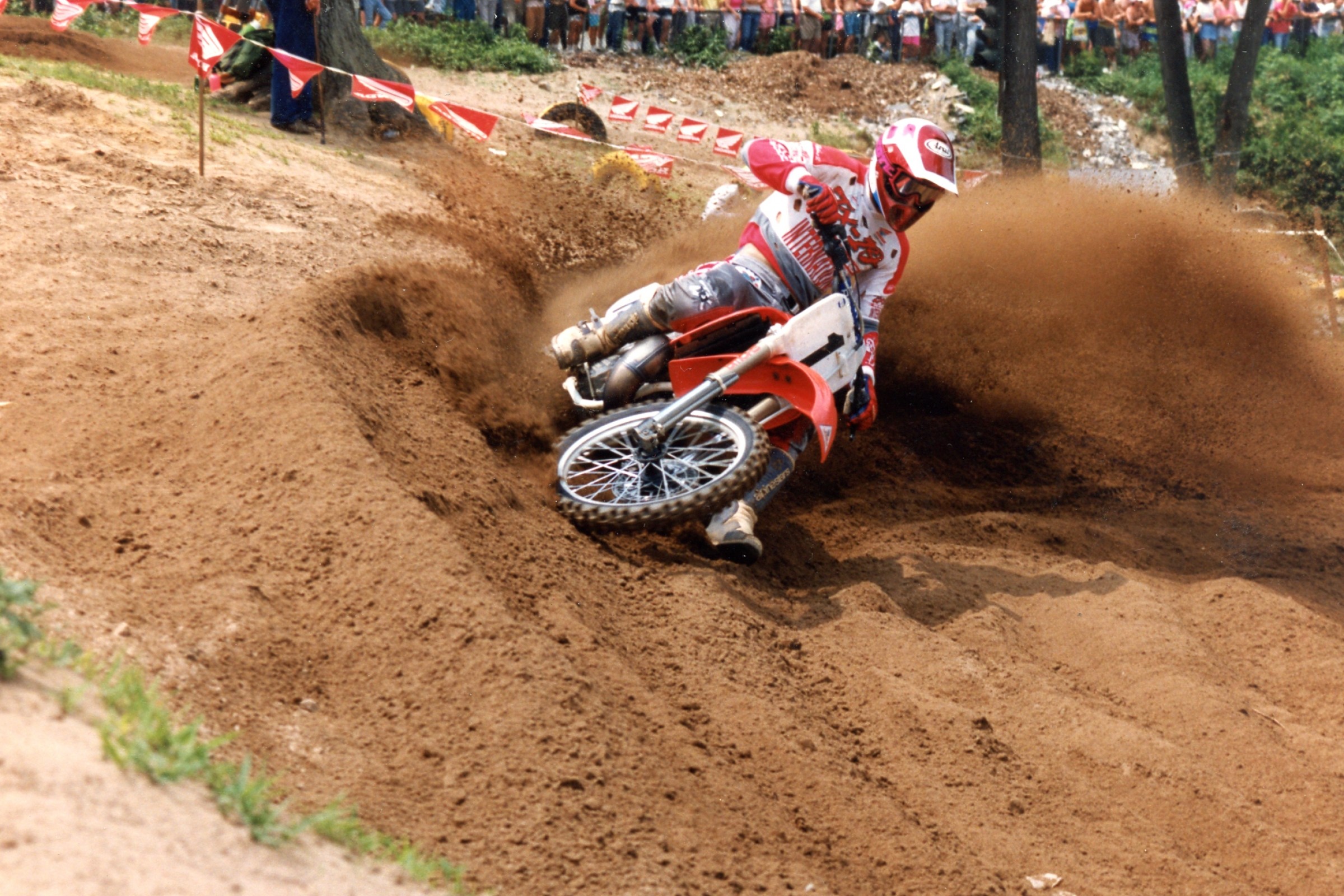 The 2018 Lucas Oil Pro Motocross Championship, sanctioned by AMA Pro Racing, is now just 9 days away! The 50th Annual Hangtown Classic, just outside of Sacramento, California, will go off the starting gate on May 19.

Five years ago, on the eve of the 2013 outdoor season, the editors and contributors of Racer X Online did a countdown of the 30 Greatest AMA Motocrossers of all time, ranking the best riders on the AMA Motocross circuit. You can check out that list right   here.

When anyone called on Jeff Stanton, he came through every time. He was a throwback athlete from a seemingly different era, the last top U.S. rider we can think of who skipped the stepping stone that is the 125 Class (then Lites, now 250) and went straight into the fray of the premier class. Never a minicycle star or amateur prodigy, the big kid from Michigan became an American motocross hero, stepping up when it was his time. Jeff Stanton is number nine on NBC Sports Gold's 30 Greatest AMA Motocrossers list.

People often forget that Stanton spent years with Yamaha. He came up through the ranks as a member of the fabled Team Dynamic program, a shop program that rivaled Team Green for years. Stanton was off minicycles and riding big bikes—his first race at Loretta Lynn's actually came in the 100cc class in 1983, and he beat three guys you may have heard of for the title: Donny Schmit, Fred Andrews, and Barry Carsten.

Stanton graduated from amateur motocross in 1986, and by then he was racing 250s and 500s exclusively, even though the 125cc class was up and running in supercross. Yamaha plugged him right into their pro team in the fall of '86, and he raced one time: the Washougal 500 AMA National, where he finished seventh. That earned him #56 as his first pro digit in 1987, and his results were good enough in his rookie year to earn #8 for 1988.

This was a time where American motocross was dominated by superstars like Rick Johnson, Jeff Ward, and Ron Lechien, with veterans like Broc Glover, Bob Hannah, and Johnny O'Mara still in the mix. Stanton lacked the flash and (seemingly) the natural talent of such athletes, so it was a surprise that Honda's Roger DeCoster and Dave Arnold decided to hire Stanton for the 1989 season as Johnson's understudy, even though Stanton had yet to win a professional race.

The Honda brass looked like geniuses when Johnson, the runaway leader in supercross, snapped his wrist at the outdoor opener in Gainesville, Florida, and Stanton was forced to step up. By the time the season was over, he was not only the new AMA Supercross Champion, he was also the 250 National Motocross Champion and the leader of Team USA at the Motocross des Nations. He even won the one 125cc race he entered as a professional—the 125 Support class at the Unadilla 250cc U.S. Grand Prix—just to show DeCoster that he could ride a 125 if RJ came back by September and wanted to race.

Many expected Johnson to fully return in 1990, or for the incoming Jean-Michel Bayle or even Yamaha sensation Damon Bradshaw to be the man, but Stanton again hunkered down and came through, successfully defending both his supercross and 250 AMA Motocross titles. He also won the U.S. GP at Unadilla (the first of three straight) and the Motocross of Nations. But for the second year in a row, he came up short in the 500 Class—the class many thought Stanton would have the most success in, given his upbringing as a big-bike rider. His undoing this time was a concussion in the second moto at Steel City, which cost him 25 points in his battle with Wardy, who would take the title by 19 points.

The 1991 season was a tough year for Stanton. He lost his SX title to his fierce rival/distant teammate Bayle, plus his 250 motocross crown—although he won four rounds to zero for JMB, washing out at the muddy Hangtown race and finishing 16th at Kenworthy's. Adding insult to injury, Bayle also beat him in the 500 Class, as did Jeff Ward.

In 1992, Stanton would return to form and to the top of the rankings, both outdoors and indoors. After taking back his #1 plate in supercross after a crazy last round at the Los Angeles Coliseum, Stanton also took his 250 title back, but ended up losing the 500cc title for the fourth straight year, this time by three points to Mike Kiedrowski, #10 on our list.

1992 marked what Stanton would later call the biggest regret of his career: In the midst of the 500 title chase, he passed on the chance to once again lead Team USA at the Motocross des Nations, which was down under in Australia in 1992, citing the brutal SX duel he had been through with Bradshaw. He would not get another chance to ride for his country.

In 1993, Stanton was caught off guard by Jeremy McGrath (not to mention the rest of the world). McGrath truly changed the game of supercross, and Stanton was not able to hold his young teammate back. He also seemed to go into a period of over-training, and it affected his outdoor results. But he would still finish second in the 500 Nationals—for the fourth time—this time just nine points behind Mike LaRocco. It was his last chance, too, as the AMA scrapped the 500 class after the 1993 season.

The end came quietly for Stanton. After crashing hard at the 1994 Hangtown National and DNF'ing with a concussion, Stanton decided his time was almost up. He waited until his home race of RedBud to announce his retirement, then rode out a Hall of Fame career. His last professional race was the season-ending 250 National at Steel City, where he finished sixth.

Stanton's three titles and 20 National wins may seem modest compared to some of the riders who have already been listed here, but he made his marks in a relatively short time frame—all of his National wins came between 1989 and '92, and all were on 250s or 500s—in a time when the competition was incredibly deep. Stanton raced in the middle of a great confluence of talent—from Hannah to McGrath, with RJ, Wardy, Lechien, O’Mara, JMB, Kiedrowski, LaRocco, and Bradshaw thrown in—and came out a Hall of Famer. His record is good for number nine on the NBC Sports Gold's 30 Greatest AMA Motocrossers list.

You can go back and check out all of Jeff Stanton's results in the Racer X Vault  right here .