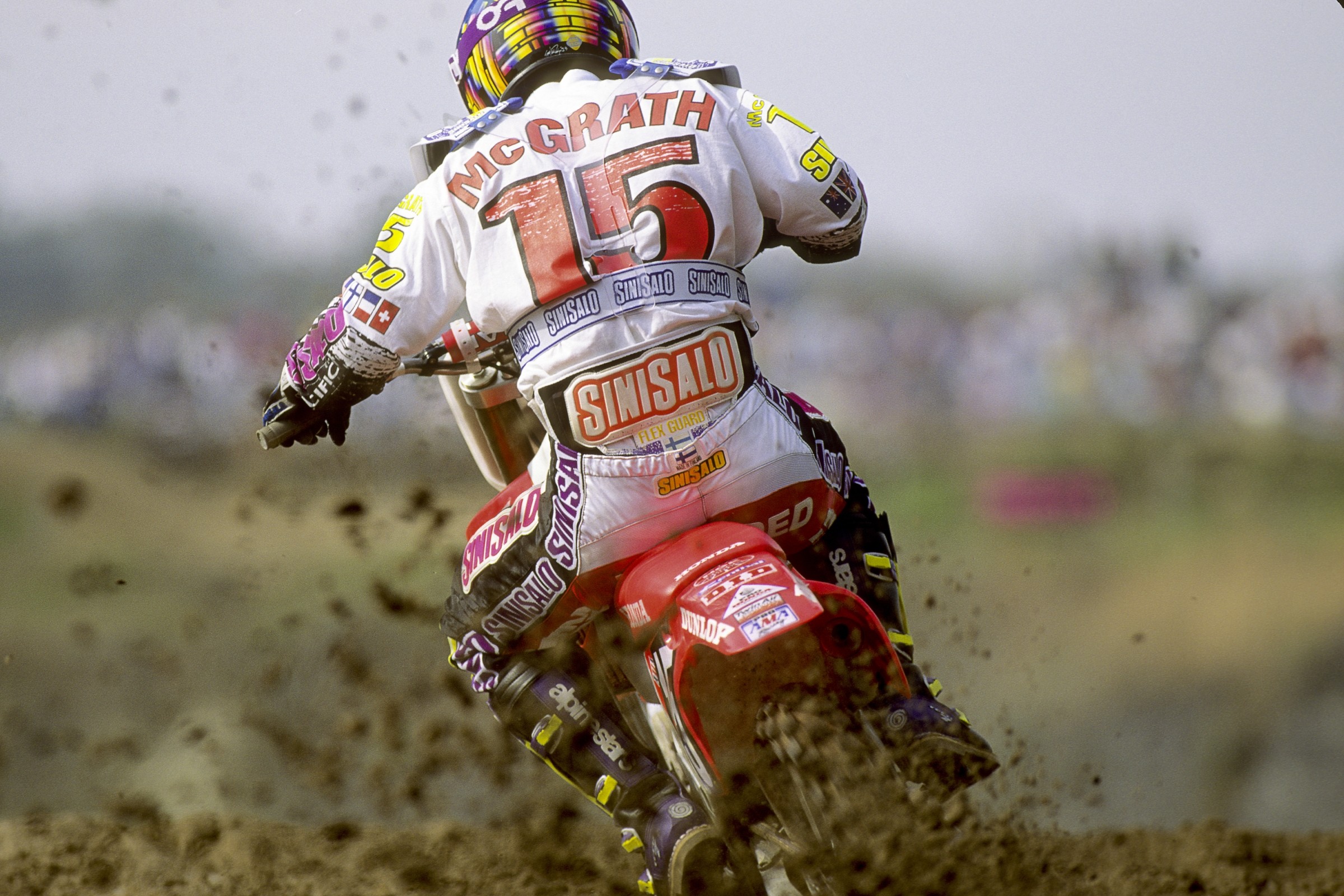 The 2018 Lucas Oil Pro Motocross Championship, sanctioned by AMA Pro Racing, is now just 20 days away! The 50th Annual Hangtown Classic, just outside of Sacramento, California, will go off the starting gate on May 19.

Let's get the elephant in the room out of the way: Jeremy McGrath is the best supercross racer who ever lived. He was #1 on our previous list of 30 Best Supercrossers of All Time, and there was no doubt about that. Even more than ten years after he retired, no one is close to his record of 72 wins, and no one may ever get close. But this list is about AMA Motocross, something the King of Supercross didn't often put his full effort into. In fact, in the latter part of his career, he signed a supercross-only deal in order to maximize his staying power and focus on his preferred form of racing.

Nonetheless, in the time McGrath did spend on the AMA Motocross tour—from his rookie year of 1991 through the start of the 1998 season—McGrath won 17 outdoor Nationals (15 in the premier class) and the 1995 AMA 250 Motocross Championship in dominant fashion. Given his speed, his time, and his competition, McGrath ranks 20th on our list.

McGrath was a late bloomer, famously working a regular job in a Ralph's grocery store and winning a Novice Class championship at Loretta Lynn's in 1987. By the time he turned pro in 1990, he was being called a natural in supercross—he seemingly came out of nowhere to win the Las Vegas 125 SX. Even back then, when you begin studying Jeremy's numbers, you will see a string of podium finishes in 125 SX, and then outdoor finishes like 20-12-39-8-10.... It was obvious early that outdoor tracks were his Achilles’ heel, just as the indoor tracks were for Ricky Carmichael. At first.

By 1993, McGrath was a two-time 125SX West Region Champ and the runaway winner of that year's Camel 250cc Supercross Championship, having taken his first four wins in consecutive races. It was at that point that he showed something we'd really yet to see: pure speed outdoors. While he raced a CR250 indoors, McGrath dropped back down to a CR125 for the opening round of AMA Motocross at Gatorback Cycle Park and promptly won.

McGrath came out swinging in 1995, revamping his training program and focusing hard on proving his doubters wrong. He put it to the likes of his longtime rival Jeff Emig, multi-time champs Mike LaRocco and Mike Kiedrowski, and even incoming FIM Motocross World Champ Greg Albertyn. McGrath won more than half of that year's 250 Nationals, clinching his one and only AMA Motocross title. He seemed in control the next year, too, taking five of the first six rounds and holding a 40-point lead, but he made a terrible mistake in practice when he tried to turn two tabletops into one big double at Millville and tweaked his ankle, forcing him to ride very tentatively for 9-7 finishes that day. The next race was Washougal, and he mustered only a 15th overall, pulling out because he just couldn’t stand riding around at the back of the top ten just for points. He would later call it the biggest regret of his career; had he stayed out there and collected a few more points, he would have had a better shot of holding off Emig and repeating as champion. Ultimately, he and Emig went down to the wire nearly deadlocked in points, and Emig beat him with 1-1 scores at the Steel City finale to take the 1996 AMA 250 National Championship.

Prior to the 1997 season, McGrath had a falling-out with Honda and ended up spending a mostly lost season on Suzuki, where little went right, indoors or outdoors. Emig won both titles.

One year later, he was on a Chaparral Yamaha, back on top of supercross, and once again leading the 250 Nationals after three rounds, including a win at Hangtown. But then he cracked his wrist and had to pull out, leaving Doug Henry with a clear shot at the title on his YZ400F.

For all intents and purposes, McGrath's outdoor career pretty much ended there. He signed a supercross-only deal and focused on rewriting the entire record book there. He rode the occasional National, showing the inherent speed that comes with being such a remarkable natural talent. The record shows those 17 career wins, plus 35 career podiums.

When we add it all up—the title, wins and podiums, the quality of his competition, sheer speed, and more—we have Jeremy McGrath at #20 on our list of the Greatest AMA Motocrossers ever.

Here's what Jeremy McGrath has on record, locked away in the Racer X Vault.