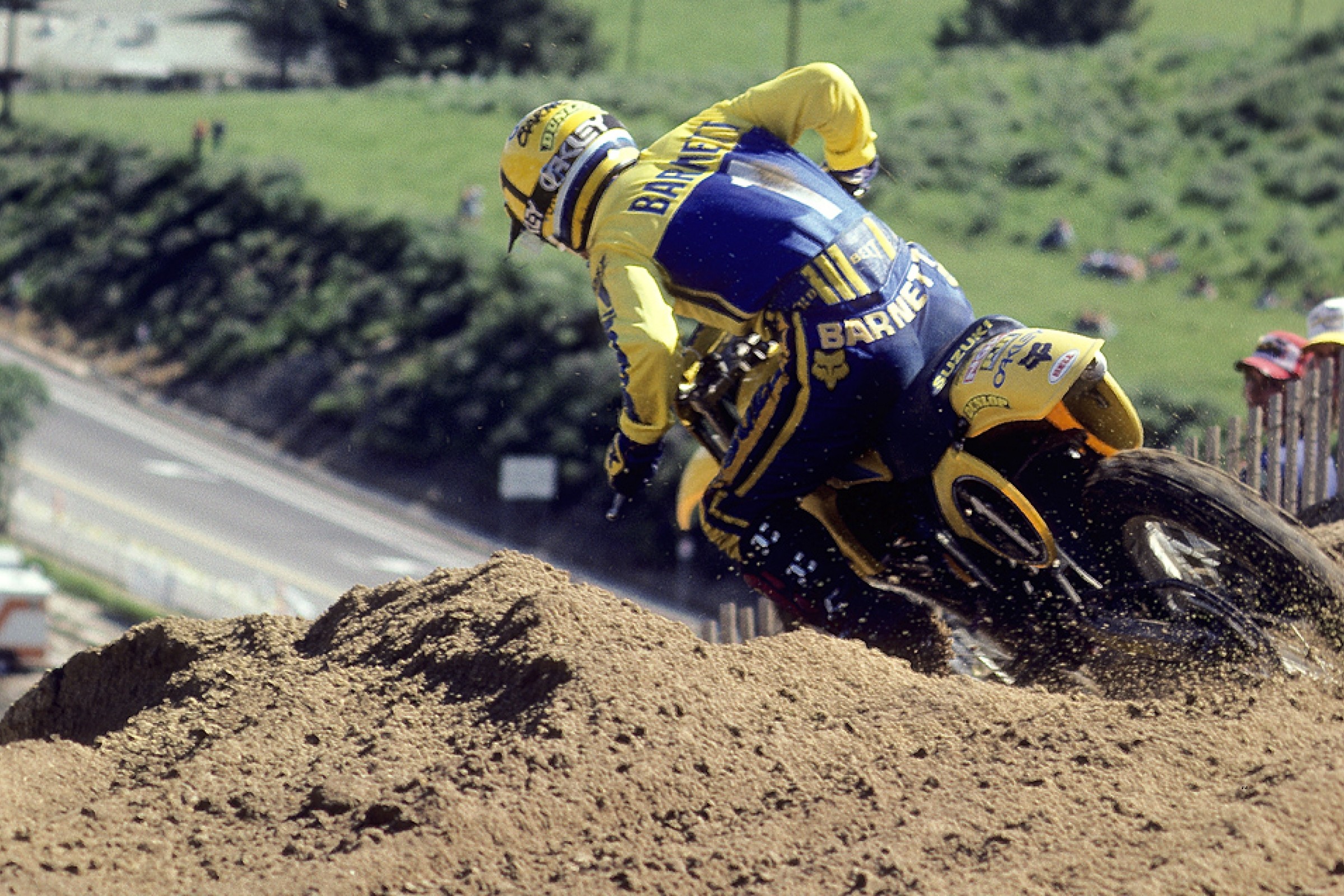 The 2018 Lucas Oil Pro Motocross Championship, sanctioned by AMA Pro Racing, is now just 14 days away! The 50th Annual Hangtown Classic, just outside of Sacramento, California, will go off the starting gate on May 19.

There have been times in American motocross where one rider took over a class and made it his own for some time—particularly in the 125cc class. Over the years several athletes have won back-to-back titles and/or a large number of races: Marty Smith, Broc Glover, Micky Dymond, Mike Kiedrowski, Doug Henry, Steve Lamson, Ricky Carmichael, James Stewart, Ryan Villopoto, Jeremy Martin. But of all the great riders who enjoyed dominant reigns over this class, maybe the most singularly dominant of all—three consecutive AMA 125cc National Motocross Championships and a total of 25 outdoor national wins—was Mark “Bomber” Barnett, #14 on our list of NBC Sports Gold’s 30 Greatest AMA Motocross racers.

He came out of Illinois as a regional sensation, an AMA 125cc Amateur National Champion from the pre-Loretta Lynn days of 1976. Barnett started as a pro riding for Team Moto-X Fox in 1977, his rookie season, and soon worked his way up to a Suzuki factory ride. Short in stature but a giant in confidence and determination, Barnett would win his first Nationals in 1978—first in Texas and then Nebraska. By '79 he was a full-fledged title contender, chasing after the slightly older Broc Glover and serving notice with his three wins that he would be ready to make a challenge the following season.

1980 was an epic battle between Barnett and Glover, who was going for an unprecedented fourth straight championship for Yamaha. In the end Barnett and his Suzuki would prove to be too much, as Bomber won four of the seven rounds and took away Glover's #1 plate with nine points to spare.

From there, Barnett would turn his attentions to younger challengers like Jeff Ward, Johnny O'Mara, Scott Burnworth, and Rick Johnson. In '81 Barnett enjoyed the most dominant season AMA Motocross would see until the era of Ricky Carmichael, winning the first seven races before missing the last round of the eight-race tour at Carlsbad with a broken collarbone. He also won that year's AMA Supercross Championship, marking the only time in series history that a 125 Motocross Champion also won the SX crown in the premier class.

Barnett would win again with ease in '82, stretching his career wins tally out to 25 race wins. But that's where his storied career reached its zenith. In '83 Barnett, still on Suzuki but now the class veteran, had some problems along the way and ended up being beaten by both O'Mara and Ward, with the young Ron Lechien taking the last two rounds to complete the changing of the guard.

The following year Barnett moved up to the 250 class, but the Suzuki equipment was not on par with that of his competition's other brands, and he and Suzuki parted ways prior to the '85 season. Barnett switched over to Kawasaki and back down to the 125 class, but injuries had mounted, times had changed, and he was no longer his dominant self. He called it quits there, only to return for an ill-fated comeback four years later with Tuf Racing.

Barnett's outdoor successes all came in the 125 Class, as he spent all but one season in the class. But when you look at his competition—from Glover to Lechien, with mega-talents like O'Mara and Ward and Brian Myerscough thrown in—he enjoyed an exceptional run during his era. Twenty-five wins and three consecutive titles, with 40 podiums thrown in, we think it's enough for #14 on NBC Sports Gold's 30 Greatest AMA Motocrossers list.

Here's all of the race results for Mark Barnett, stretching from Hangtown '77 to Gatorback '89, in the Racer X Vault.