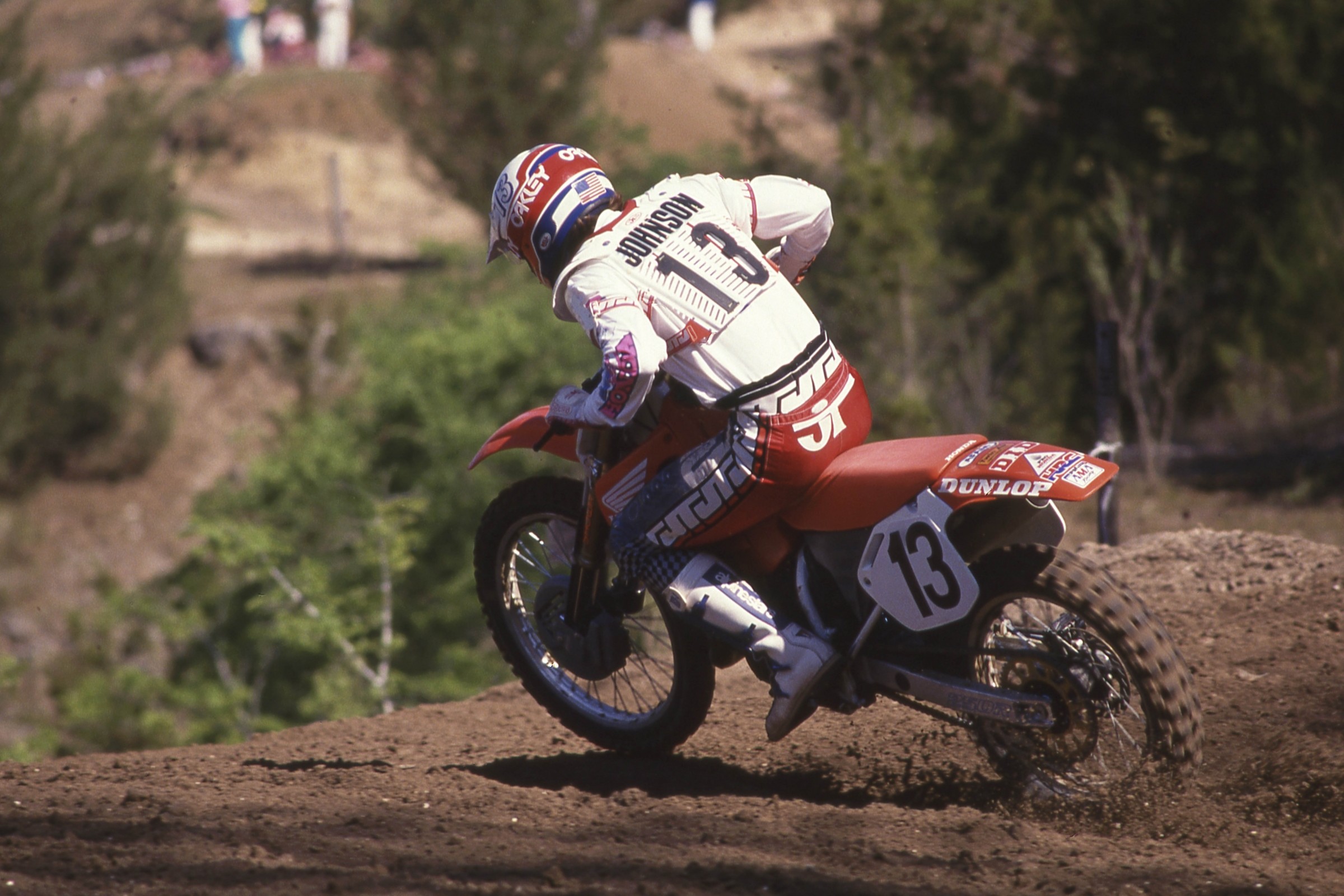 The 2018 Lucas Oil Pro Motocross Championship, sanctioned by AMA Pro Racing, is now just three days away! The 50th Annual Hangtown Classic, just outside of Sacramento, California, will go off the starting gate on May 19.

The model of the contemporary American motocross superstar was forged from many great champions through the years, but none epitomizes the fully finished product better than Rick Johnson. He was the cutthroat, crowd-pleasing battler we see in a Ryan Villopoto or a Justin Barcia, a consummate worker like Ryan Dungey, had the charisma of a Kevin Windham, and possessed the sheer speed of a James Stewart. In the eighties, Ricky Johnson came along with all of those, and the impression he made in a championship-filled career stays with us to the this day. He's from the El Cajon Zone, the quintessential California, and he's #3 on the NBC Sports Gold 30 Greatest AMA Motocrossers list.

With pretty much every athlete up to this point, we have explained their era, their competition, their career journey, and their ultimate legacy. For a generation of motocross fans, Johnson is the man we think of most when we think of the eighties, even though that era was absolutely packed with legends: Broc Glover, Jeff Ward, Mark Barnett, David Bailey, Johnny O'Mara, Ron Lechien, Danny “Magoo” Chandler, Micky Dymond, and more. It was Johnson who most often rose above in a time when motocross was going through a revolution of sorts, the Americans having proven to the rest of the world that we were now the power in motocross, and RJ more often than not being best among the Americans. He played up to the fans not only by winning, but doing so in a way that just looked like too much fun. He allowed his image to be used in ways motocross magazines had never really seen—the muse for Fox Racing's surge during that time to the stylish top of the line. And he was a talker, too, not someone who would hang out under his tent or lock himself in the back of his box van while fans waited for hours outside the pits. In that regard, RJ was the Travis Pastrana of his time.

Because of the talent amassed around him, Johnson did not have the dominant, undefeated seasons of others on this list, nor was he a minicycle prodigy who arrived at his first National with a Datsun pickup truck full of trophies. He did have support from Yamaha, and as a 16-year-old support rider, he made a run at the '81 AMA 125 Nationals, a series almost completely dominated by Mark Barnett. When the Bomber missed the last round with a broken collarbone, it gave Johnny O'Mara an opening to take his first win at the Carlsbad National. But the winner of the second moto that day was #212, Ricky Johnson.

In 1982, Yamaha moved the kid up to the 250 Class alongside the veteran Glover, with Bob Hannah moving to the 125 Class. Now 17 and a big kid anyway, Johnson made the best of it, winning his first National at High Point and taking the battle to Glover and Team Honda's Donnie Hansen all the way to the last round at the old Lakewood track in Colorado. There he made a mistake of youthful inexperience by jumping too far, too often on the concrete-like hillside dirt and shattering his wheel, as well as his title hopes. The lessons he learned would have to wait until 1984, though, because Johnson suffered a fractured hip during the '83 supercross tour.

By 1984, things were starting to come together for Johnson. He showed marked improvement in supercross, and then he raced his Yamaha (yellow that year for the last time) to his first title, the AMA 250 Motocross Championship. He also accepted the mission to ride for Team USA at the Motocross and Trophee des Nations, and they won both. Like all of those other eighties guys who were called upon, RJ would never be on a losing version of Team USA.

It was in 1986 that Johnson really hit his stride. He joined Team Honda alongside Bailey, O'Mara, and Dymond and soon became both the AMA Supercross Champion, as well as the AMA 250 National Champion. He pulled up six points shy of the 500 title, as his teammate Bailey held him off. (Unfortunately, that was Bailey's last year in racing.)

In 1987, Johnson found himself at the top of everything alongside Jeff Ward of Team Kawasaki. He was seemingly on every magazine cover, the star of every race that was shown on TV, the man with the longest autograph line in the pits. He was trying new moves on the motorcycle, too, throwing his no-legged whips harder, doing hands-off tricks mid-race, and just basically having fun. But away from the track, Johnson was a workhorse. He swept both the AMA 250 and 500 Motocross Championships that year, though some mangled fingers late in supercross hurt his chances to sweep it all and Jeff Ward retook the SX number-one plate.

RJ hoped for a repeat of both 250 and 500 titles and maybe even that Triple Crown in 1988, but this time his problem was in the 250 Nationals, where a breakdown at Lake Sugar Tree ruined his title bid. He made do with another SX crown and another 500 AMA Motocross Championship.

At the start of the 1989 season, Johnson looked better than ever. After reeling off five wins to start AMA Supercross before losing in Atlanta, RJ rode into Gatorback Cycle Park in Florida as everyone's favorite to run away with it all… but he didn't even make it out of practice. Johnson tangled with Honda support rider Danny Storbeck on top of one of the ledge jumps, Storbeck coming down of RJ's arm and snapping the navicular bone in his wrist. Back then, it wasn’t an injury doctors were used to dealing with. Try as he might, Johnson never got back to his full speed. He did win some races, like the '89 Unadilla FIM 250 GP over Jean-Michel Bayle, the 1990 Gatorback outdoor National opener, and finally the season-ending Unadilla 500 National. But that right wrist kept locking, and Johnson had little choice but to stop racing—if he couldn't win, he just wasn't interested.

By the time he did quit, a generation of kids had learned much from him and the men he battled. Bailey, Glover, Lechien, Ward, O'Mara—they were all influential, but Johnson had it all: the versatility, the work ethic, the style, the PR savvy, the aggressiveness. He was the main model for today’s professional motocross rider. For that, plus all those wins and titles, he’s ranked #3 on our NBC Sports Gold 30 Greatest AMA Motocrossers list.

Rick Johnson's race results from 1981 through 1991 can be found right here in the Racer X Vault.