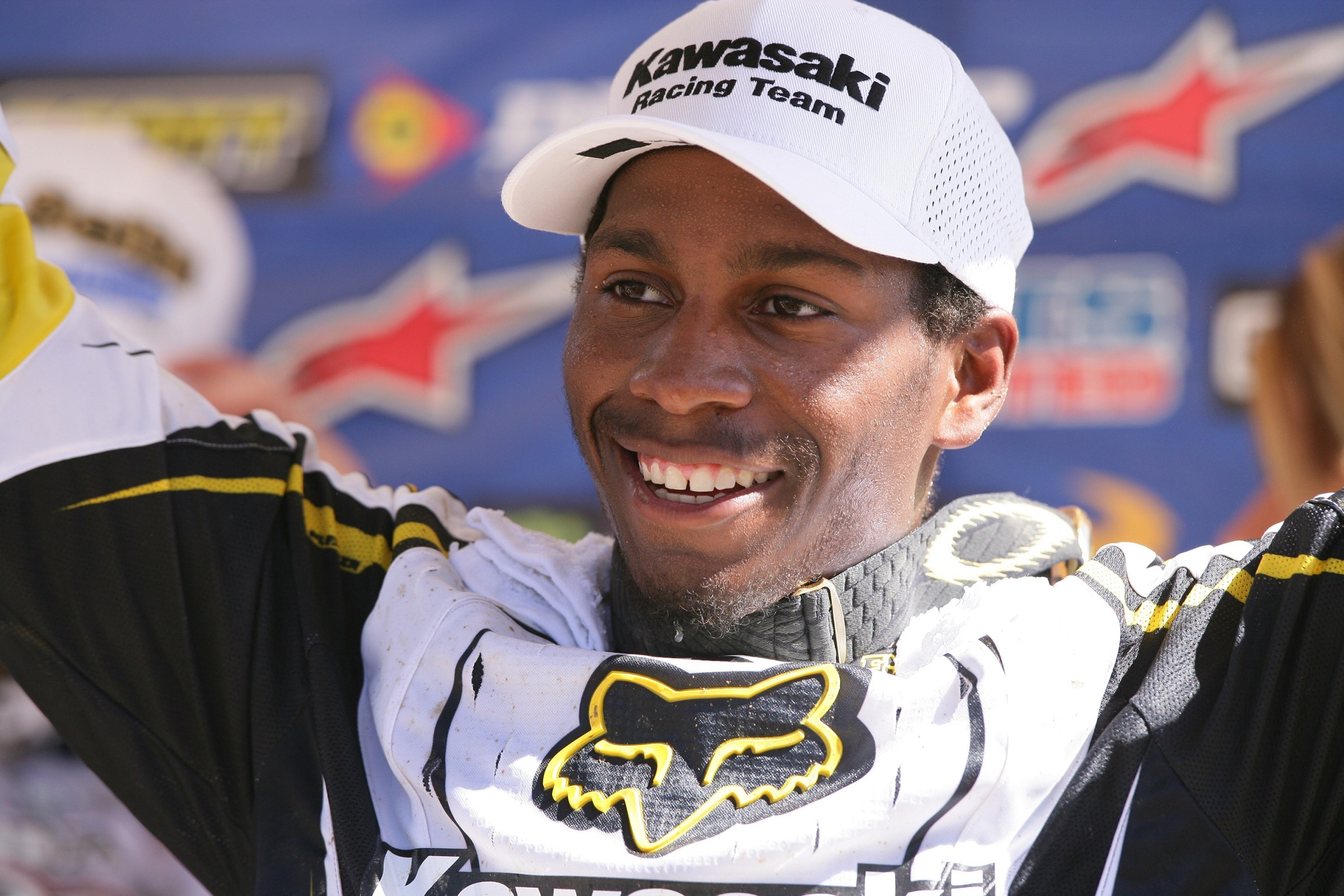 The 2018 Lucas Oil Pro Motocross Championship, sanctioned by AMA Pro Racing, is now just six days away! The 50th Annual Hangtown Classic, just outside of Sacramento, California, will go off the starting gate on May 19.

Not much has changed since the last time we had a list of the 30 Greatest AMA Motocross Riders five years ago, unless you’re James Stewart. If you are, a lot has changed—and not a lot of it good when it comes to motocross. He was number five on our original 2013 list; now he’s slipped out of the top five. His results up to that point were mostly remarkable, but the saga that’s been his career since the start of the summer 2013 has definitely weighed on his legacy. But man, could he ride a motorcycle….

Here’s what we wrote last time, updated to reflect the time that’s passed.

What matters to many is the fact that they are finally seeing that name—James Stewart—and he's the most polarizing professional racer in the history of our sport. He's also been dubbed “the fastest man on the planet,” and, more often than not, for good reason. He's been dominant, but he's also been inconsistent, fragile and even just absent—his three years of riding SX-only added depth to the dislike some have had for him, a special criticism that mostly missed other SX-only riders like Jeremy McGrath, Mike LaRocco, and Kevin Windham.

And then there was the whole FIM suspension for testing positive for a banned substance without a therapeutic use exemption (TUE) that cost him 16 months of racing, followed by long swaths of inactivity, mystery, and simply disappearing entirely from the public eye. We don’t know if we’ve really seen the last of him, because nothing has been said since last November, when he popped out of his garage in Florida on a Honda to ride at the JS7 Ride Day with some of the winners from his namesake race at Freestone in Texas.

Everyone seems to look at Stewart through a different prism, including himself. He learned early on how to deflect questions about his race, smiling and saying, “We all look the same with our helmets on.” But it wasn't the same for him, helmet on or off, and the unique scrutiny he has come under over the years is unrivaled in motocross. Even when he's complimented by a journalist or labeled one of the greatest riders of all time, which we are doing right now, sooner or later someone will say “you're just being politically correct” or “he's the media darling.” No one as ridiculously fast as James Stewart has ever been ridiculed so quickly in this sport. It's okay to root against anyone, but so many who root against James Stewart do it with unique vigor.

Of course, there were things that Stewart did along the way that did not help ease the waters. He starred in his own reality show, a polarizing move whether you're a rising sports star, or a celebrity that thinks he or she can dance, you're the Bachelor or Bachelorette , or just some tanning-bed bimbos in New Jersey. While he was showing off his exotic cars and beautiful ranch, moto enthusiasts just wanted him back at the races.

He made it look so easy and fun, at least early on. Stewart started winning almost immediately when he turned pro, and his charisma and enthusiasm was palpable. His huge smile and funny dances that were part of the “Bubbalicious” years made him seem like the heir-apparent in showmanship to Jeremy McGrath, but to become that, he first had to move up and beat the man between him and McGrath, Ricky Carmichael—something not so easily done, as the world would find out.

In hindsight, Stewart's early dominance on a 125 proved in some ways to be his Achille’s heel when he moved up. In his three years in the tiddler class, he raced 31 AMA Nationals and won 28 of them—he DNF'd twice in '02 (twisted his knee in one race and an engine blew at another), and a crash off the start at RedBud in '04 cost him a perfect season. Yet when he moved up to challenge Carmichael in 2005, he didn't seem to have the ability to settle for anything less than winning. That in turn led to a highlight reel’s worth of spectacular crashes, especially outdoors, as he pushed his KX250 to the limit in trying to stay with Carmichael's RM-Z450. He didn't win a race in a summer that ended early.

The crashing problem stayed with Stewart even on the 450 through 2006, though he did take three wins of the 12 Nationals that season—something no one else did against Carmichael on big bikes.

Stewart's last outdoor races against Carmichael were frustrating for him. In the five times they raced together in 2007, they seemed almost evenly matched in speed and fitness, often splitting moto wins, but Ricky took the overall every time. And when the GOAT took his leave and Stewart inherited what appeared to be a straight shot at the title, he crashed himself out of Unadilla in practice, then wrenched his knee at Washougal and his season was over.

The summer of 2008 was Stewart's masterpiece on the 450 outdoors, but by that point, the damage done by the losses to Carmichael seemed to not only harden Stewart's resolve, but seemed to make him a bigger target. There were some ugly moments along the way to the top, where haters threw out curses and middle fingers at the man, especially at outdoor races. He got through it all, but I personally believe that it was some of that experience that led him to take a different career route.

Stewart left Kawasaki and his AMA 450 Motocross Championship, he rode for an SX-only team for a while, just like McGrath and Chad Reed did, and the one time he showed up for an outdoor race during that period—Unadilla 2010—he didn't look the same as the guy who ran the table just two summers earlier. He pulled out, stepped into his motorhome and started looking ahead to supercross. Fans hoping for more were bummed.

When James left the San Manuel Yamaha team for JGR Yamaha at the start of 2012, he planned on racing outdoors again, only to never seem to get comfortable with their bike. He showed flashes of his old brilliance in supercross, but also of his fragility. After a few more epic crashes, he decided it was time for another change. He was released from his contract and signed on with Yoshimura Suzuki, making his debut on a yellow bike that May. He won the first four motos of the 450 Class, with Ryan Dungey breathing down his neck the whole time. Then while leading the third round at Thunder Valley, a photographer crossed the track in front of him at the landing of a downhill jump, and the surprise seemed to get Stewart out of rhythm and off his line. He crashed, injuring his wrist and ending his day, not to mention his points lead. Somehow, in some corners, it was all his fault.

In June of 2014, he won the High Point National and seemed to be getting back in the thick of things aboard a Suzuki. Then the FIM told him he had failed a drug test from months earlier, and his career went into a sort of freefall. He did come back and race once his restriction ended, but he was never close to winning another motocross race. In July of 2016, he raced Spring Creek and Washougal and finished 15th both times. He hasn’t raced since.

So here we are, more than a decade into James Stewart's professional motocross career. He hasn’t won as many races as many expected of him, though he's won more than anyone else except for one man. His winning percentage is not as great as some might have guessed it would be, but it's still far greater than anyone but Carmichael's. (RC won 102 outdoor Nationals in 127 starts, which is a winning clip of 80 percent, while Stewart has won 47 Nationals in 83 starts, which is a 57-percent average. No one else is even at 40 percent.) He long ago lost the “fastest man on the planet” label like he used to, but for a lot of times, he really was.

Stewart will always be measured against uniquely high standards. He was judged almost immediately not against those he had to race, but against the records set by the two of the greatest champions the sport has produced—McGrath and Carmichael. The expectations and the pressures must be epic. Figuring out where to place him on this list wasn't easy, either. But that name—James Stewart—belongs here among the greatest of all time, based on his records, his sheer speed, and his obvious innovations. We rank James Stewart at number six on our NBC Sports Gold 30 Greatest AMA Motocrossers list, based on what he did, not what he could have done—and now how it just sort of came to a quiet end.

You can see all of James Stewart's results, both in motocross and supercross, in the  Racer X Vault.