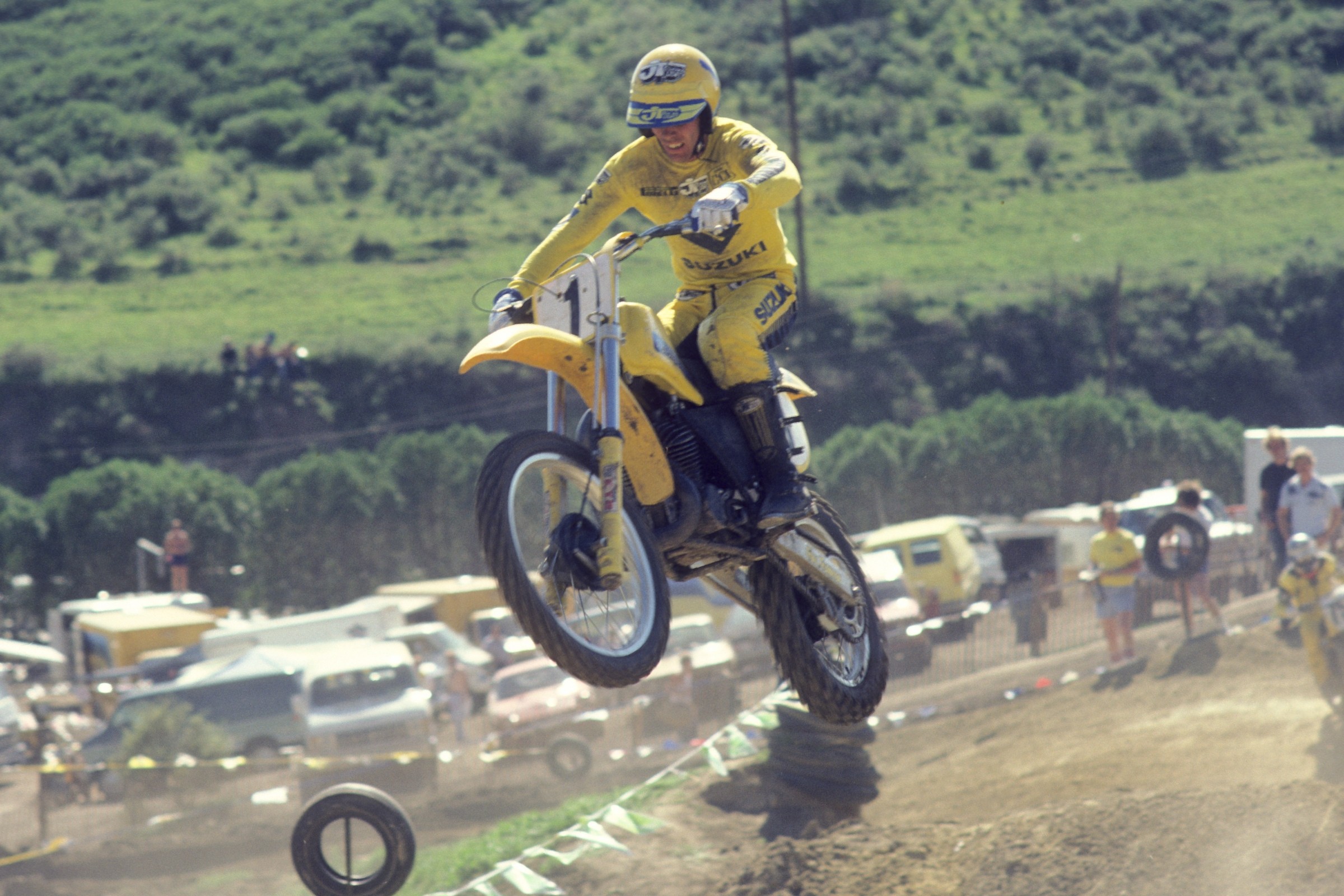 The 2018 Lucas Oil Pro Motocross Championship, sanctioned by AMA Pro Racing, is now just 12 days away! The 50th Annual Hangtown Classic, just outside of Sacramento, California, will go off the starting gate on May 19.

Kent Howerton was a quiet innovator from Texas who earned three AMA Motocross Championships during his career, which stretched from 1973 through the mid-eighties, as well as 23 outdoor National wins. (He also had some success in supercross, but never a championship.) His quiet, all-business demeanor at the races—the complete opposite of more flamboyant characters like Bob “Hurricane” Hannah and “Jammin'” Jimmy Weinert—kept the spotlight off of him, especially after he faded off the circuit. But one thing Howerton did remains with us today: He is widely credited with being the first rider to use the clutch to add power and pull to the motorcycle everywhere around the race track. He is also #12 on our list of NBC Sports Gold's 30 Greatest AMA Motocrossers.

Howerton's first efforts in AMA Motocross date back to 1973, when he joined the AMA 250 National tour as a privateer from San Antonio after learning the ropes racing his CZ motorcycle against Texas legends like Wyman Priddy and Steve Stackable. One year later he found himself on Husqvarna, and he earned his first National win at the summer-ending New Orleans 250 National.

One year later, still with Husqvarna, Howerton won three of the five rounds of the short AMA 250 National Motocross Championship, but the more consistent Tony DiStefano would win the title with a single race win. It was enough to earn him a nickname from Cycle News' legendary reporter/photographer Jimmy “The Greek” Gianatsis, who started calling Howerton “Rhinestone Cowboy” in a nod to the Glenn Campbell hit from the same year.

The next year, Husqvarna bumped Howerton up to the 500cc Class, and that's where he finally broke through to earn his first championship over Gary Semics. But come '77, his title defense was not what he’d hoped for, as he finished fifth without a win. Disappointed in the lack of development of the Husky, which was falling behind the Japanese bikes—and, quite honestly falling apart at the races—Howerton made a switch the following season, joining Suzuki. His results did not improve immediately, though, as this time he actually finished sixth.

Howerton's change to yellow began to pay better dividends in 1979, when he finished second to his nemesis Bob Hannah, who by that point was at the absolute zenith of his dominance. But in the off-season, Hannah was injured in a water-skiing accident, the boat driven by his friendly rival Marty Tripes. Howerton pounced immediately, winning that fall's Trans-USA Series (though by then, it was a shadow of its old self).

Howerton made the most of the 1980 season, dominating the 250 Nationals for a second career AMA National Championship with six wins in seven rounds. He added the Trans-USA title again for good measure, and he won the Unadilla 250cc U.S. Grand Prix for the second year in a row. He was now the top dog in American motocross.

Even when Hannah came back in 1981, Howerton was ready. The two engaged in some hellacious battles, most notoriously at Saddleback Park, where a collision left Howerton with a gash in his arm that required stitches. Hannah won that battle, but Howerton would go on to win the war and retain his #1 plate.

Howerton seemed well-placed to win a third straight title in 1982, especially since Yamaha was sending Hannah down to the 125 Class. But he broke his wrist that fall, so Suzuki dispatched Howerton to the later-starting 500cc Class. He would win the opener—Suzuki's last AMA win on anything above a 250 until Ricky Carmichael in 2005—but he broke his leg a couple of rounds later and his season was finished. So was his time with Suzuki.

For 1983, Howerton, now on the circuit for more than a decade, switched over to Kawasaki, and he would finish second in the 500 Nationals, right between Broc Glover and Danny “Magoo” Chandler. Howerton also won the Gatorback round—his last win as a professional. Over the next few years he would pull back on racing, and he rode his last AMA Motocross race in June of 1988, finishing 11th at the Good Times National at Lake Whitney.

Want to see all of Kent Howerton's results over his long and successful professional career? You can find his SX/MX scores in the Racer X Vault.