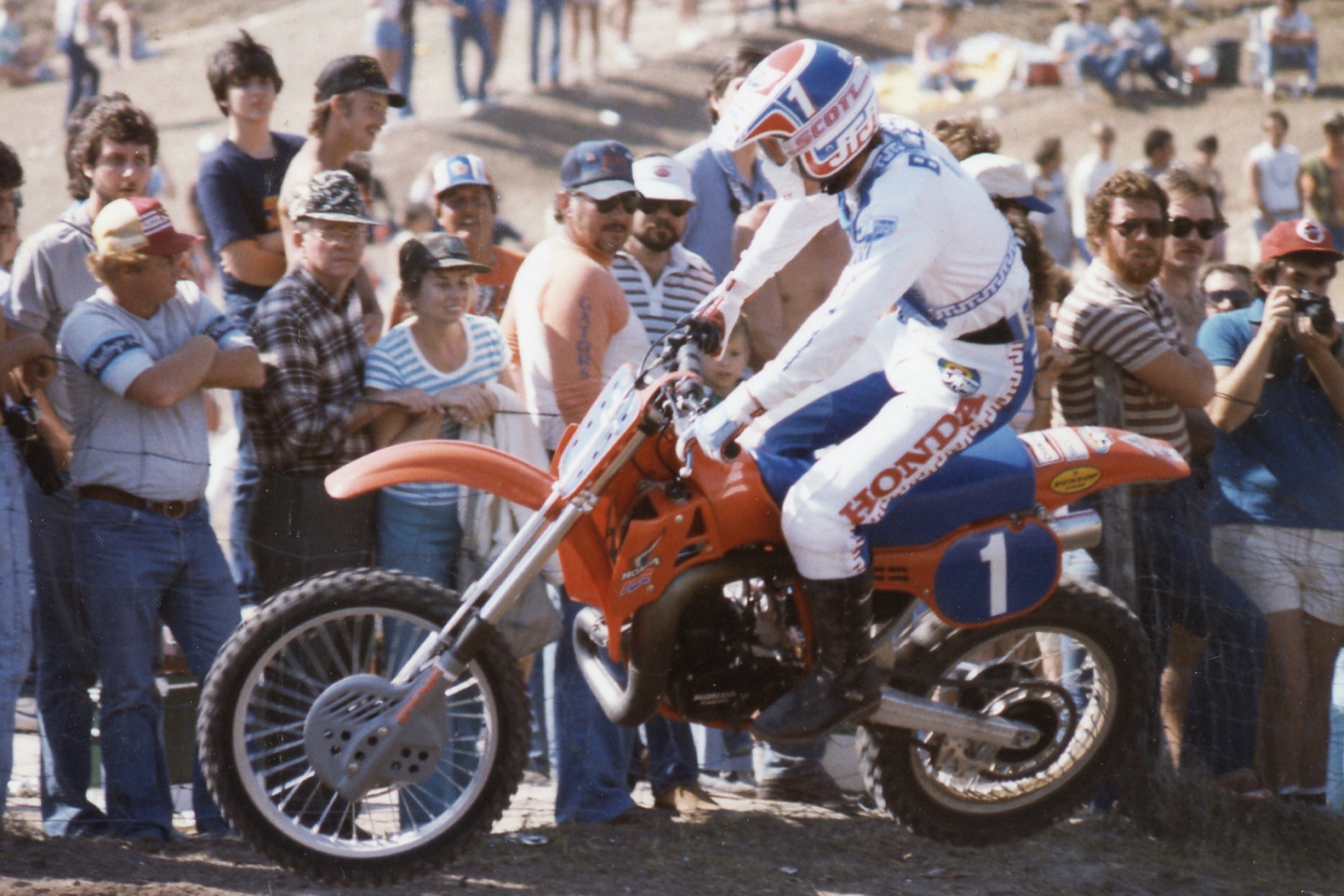 The 2018 Lucas Oil Pro Motocross Championship, sanctioned by AMA Pro Racing, is now just 13 days away! The 50th Annual Hangtown Classic, just outside of Sacramento, California, will go off the starting gate on May 19.

In the history of American motocross, there may not be a more beloved athlete than David Bailey. A child of the sixties, a prodigy through the seventies, and a champion in the eighties, Bailey was the quintessential motocross hero: charismatic, cool, and deeply competitive. He was a Team Honda superstar, a champion both outdoors and inside the stadiums, and a Team USA hero at the Motocross and Trophee des Nations. Then his life took an unexpected U-turn—the result of a career-ending crash in January 1987. In time, he became even more of a hero—an icon, even—first as a broadcaster, triathlete, rider advocate, and more (David is also a longtime contributor to Racer X Illustrated). So it may come as a disappointment to some who have been following our NBC Sports Gold 30 Greatest AMA Motocossers list that David Bailey doesn't rate higher on this list than #13, given his contributions to the sport, both on and off the track.

In AMA Motocross racing, David Bailey is a three-time champ: 1983 250cc Motocross, '84 500cc Motocross, '86 500cc Motocross. He also won a total of 18 outdoor Nationals: 15 in the 500cc Class and three in the 250cc Class. His first pro races came in 1979 when he was a privateer on a Bultaco, pulling his bike around sometimes in the back of his car! In 1980, he joined Kawasaki as what can best be described as a charter member of Team Green, and then caught the eye of Team Honda prior to the 1982 season. Throughout that time, Bailey was steadily improving, going from barely scoring points on those antiquated Bultacos to climbing into the teens and lower on the Kawasaki. His last ride on green was the 1981 San Diego SX, where he finished fifth in the main event, matching what was a career-best at that point.

His trajectory at Honda was rapid. He reached his first podium at the '82 Lake Whitney 250 National, then scored second a few more times before finishing the 250 Nationals ranked sixth. This was a period in which the talent was fairly evenly split into three classes—125, 250, and 500—and the 6' 3” Bailey never entered a 125 National.

The following year, it all came together for Bailey for the first time. He took his first wins both indoors and outdoors and was crowned the '83 AMA Supercross Champion, as well as the 250 National Motocross Champion. He was the recipient of  “good luck” in the form of a broken wrist for his veteran teammate Bob Hannah, who, at the time of the Orlando SX in June '83, was leading both SX and MX, having won five of the first six rounds. Hannah would recover enough to win the last round of the 11-race series at Millville, but Bailey was already in championship mode, beating Suzuki's Scott Burnworth for the title by nearly 40 points.

The following year, Bailey would wear the blue and gold #1 plate of the Wrangler Grand National Champion, but he would be moved up to the 500cc Class by Honda to take on defending champion Broc Glover in an otherwise thin pack. Bailey beat the fellow Hall of Famer eight straight times to start the ten-race series, then coasted home as 500cc champ.

The next year, Glover took his revenge in the 500cc Class, winning five of the first seven rounds in what had become a two-man division and cruising to the '85 title. Because 500cc Class racing had become the weakest of the three divisions—Suzuki was no longer making open-class bikes, and Yamaha had pretty much stopped the development of their own bikes—the AMA decided to change the schedule to allow the 250cc series to run the first part of the schedule, and the 500s to go in the second half. That would allow riders like Bailey and his rival Glover to race in both classes. But Glover was injured after just two Nationals, and Bailey's attention turned to a new nemesis: his new Honda teammate Rick Johnson.

In supercross, Johnson had beaten Bailey in a fierce duel, then dominated the five-round AMA 250 Motocross Championship with four wins, with Bailey a distant second in points. But David took his revenge in the 500 Class, winning three of the six rounds to snatch that title from Johnson by six points, preventing RJ from a season sweep.

Unfortunately, David Bailey's AMA Motocross career as an athlete ends there with him holding up the #1 plate at Washougal, the last race of the '86 domestic season. Of course, he and Johnson would team up together one more time—along with close friend and Honda teammate Johnny O'Mara—for the '86 Motocross des Nations at Maggiora, Italy, for one of the most dominant performances in motocross history.

In January 1987, while preparing for what he and many others felt might be his best season to date, David Bailey broke his back at a Golden State race in California, ending his time as a motocross racer. But the impact he had, and the numbers and titles he posted, were enough to make him an all-time great of American motocross, and earn him the ranking of #13 on this list of NBC Sports Gold's 30 Greatest AMA Motocrossers.