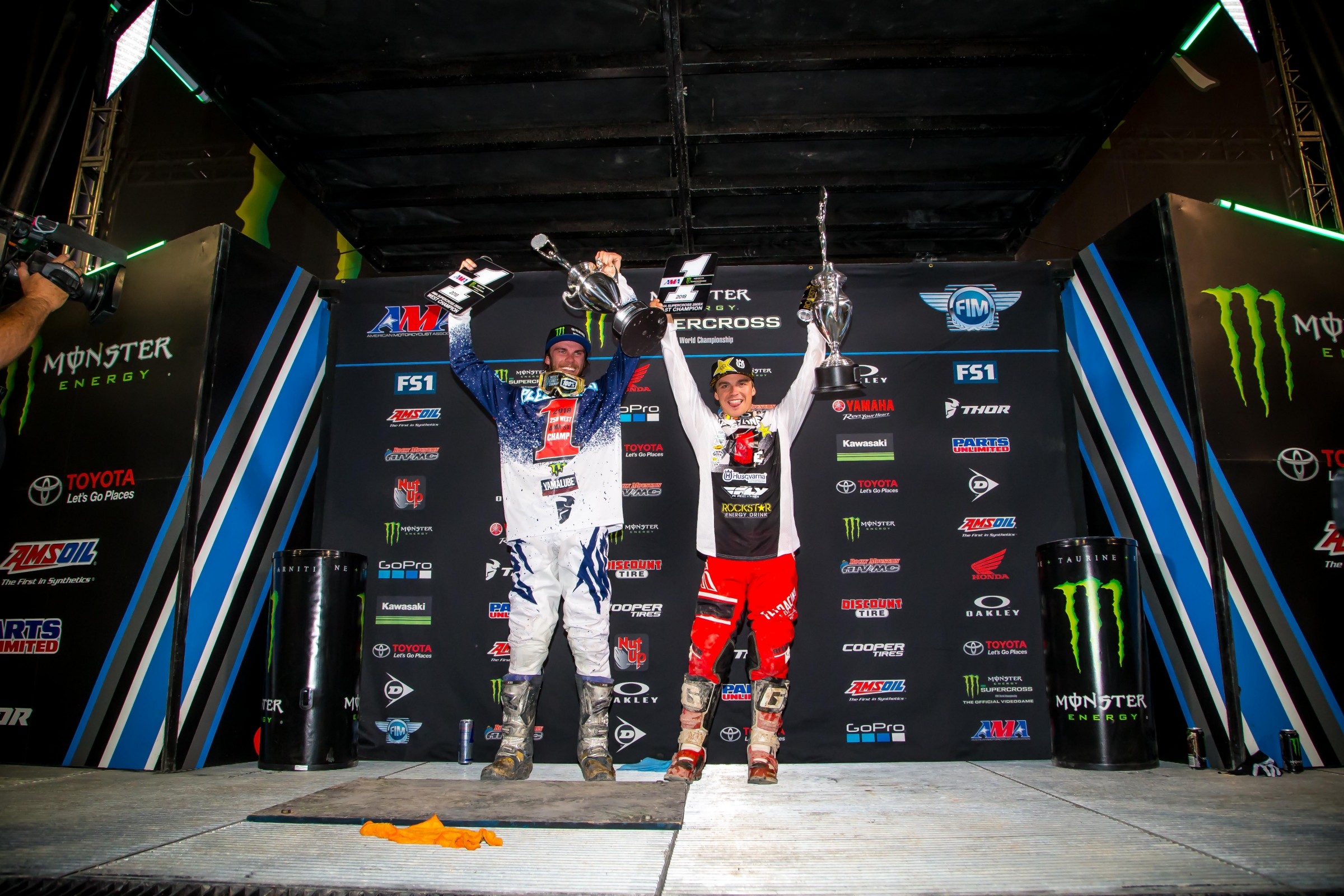 Racer X: Aaron, are you pretty excited?
Aaron Plessinger: You could say that.

Take us through that main event. You were in a position where things were kind of close. Adam [Cianciarulo] was within range there. If a little mistake happened, he could have got it. What were those laps like, especially there are the end where you knew you were in the right position, but it was still kind of close?
Plessinger: It was crazy. Got off to a mid-pack start and had to battle my way up to eighth. I had a moment. I swapped pretty good going down the far back straightaway before I got into the sand. After that, I said, “Time to back it down.” I think I was behind Zach at that time, and I knew I didn’t have to get any more positions, so I just kind of sat back and had a good old time riding my dirt bike.

Zach, on the podium you mentioned that this might have been the hardest of all the championships you’ve won. Kind of take us through that thought process and why this one was so difficult and how you were able to fight through it and get it.
Zach Osborne: Mainly I put a lot into my winter, my boot camp. When these guys started racing, I kept riding four days a week and just grinding because I wanted to come in as prepared as possible. Maybe came in a little bit flat, not really at my tip-top. I missed it by maybe two weeks. I had to work through that. Then a sit-down after a run-in at the first race with someone. That kind of changed my perspective on what I needed to do and kind of put me in a situation that I’ve never really been in where I couldn’t just go out there and give it 100 percent all the time. I needed to be courteous on occasions and just kind of manage things. For me, this one was a little bit of a different look at how to win a championship.

Jason, last October, I don’t know if you remember, but at the afterparty after Monster Cup, you told me you were going to win this championship. You said you were getting started on your program a little early. You were fired up. You were going to figure some things out and you were going to win it. You did. What was it? Something changed this year. Everything came together. Ultimately, what was it?
Jason Anderson: I think that’s called a little bit of liquid courage right there. But this whole off-season, I just did what I felt was right and I really manifested winning that championship. That’s all I thought about. It’s unreal. Seventeen rounds, I started leading it at round two. It was tough. Even right now, the last week, last two weeks, I’m pretty mentally spent. It’s been a lot of pressure. I’m proud of myself that I handled it decently. Last weekend was kind of crazy, but I have no words. I’m just still kind of shocked on everything that’s happened.

As a follow-up question, where’s the afterparty tonight? We’d all like to go.
Osborne: We made a collective decision that we’re going to be going in and we’re going to go back and watch the race in my motorhome, have a small treat for dinner, and go to bed and focus on this outdoor title.

Anderson: I don’t know what he’s talking about. I did not agree to that plan. Unless we can have everyone here in your motorhome and have a keg.

Zach, you’re closing out your 250 career with two titles. What’s next for you? You got a plan? Are you going to be side by side with this guy?
Osborne: Yeah, I’m just going to go out there and nail him, basically. He’s going to get it every day during the week and then Saturday, too. No, I have to be realistic. It’s my rookie season. I’ll be 29 when I start the first 450 race of my career. My main focus is to go out there and kind of do my best to miss the rookie pitfalls, if you will, and just be a solid guy in the top five. Hopefully contest for some podiums and wins. I don’t really know. I feel like if I can get really, really good and comfortable on the bike, that I can do some damage. But to say that I’m going to go out there and win the championship is pretty big. I’m definitely not ready to state that. I’d like to go out there and just see what I got and work forward from wherever I’m at, no matter where that is.

Jason, what was it like? You commented just now you had the points lead after round two. How can you manage the points lead yet try to win races? It seems like that would be difficult.
Anderson: For sure. I feel like I could have probably won more races if it was a little bit closer. I feel like some of those races, I was just thinking about points and everything like that, so it was tough to kind of really send it. It was tough.

Maybe the second part to that is, and I don’t know what my question exactly is in this, but what really impressed me, it seemed like if you got a bad start or you had a crash, you really seemed to make every minute count. You charged to get back near the front. You never gave up.
Anderson: This 450 season is 17 rounds, and every point counts. You could kind of tell with that last round how crazy it was. I needed those points, so it really, really counted.

Zach, you said you had a sit-down after the first round. Was there some sort of a formal probation? What happened there?
Osborne: I was on probation from the thing here last year in Vegas, so they just really made it clear.

Aaron, down on the podium, I saw you with your girlfriend. Did you propose?
Plessinger: Yeah, I did.

For all three of you, Zach, you went through it last year. You won two titles. But for you guys, it’s your first titles as pros. What was today actually like?
Osborne: Supercross champ.

Oh, that’s right. 2014. What was today like? Were you able to act fairly normal, or are we just kidding ourselves that you were able to do that?
Anderson: For me, I feel like I got food poisoning last night. Even right now I’m shivering because I’m so cold right now. I was throwing up all night. It was crazy. Even like right now, I’m struggling a little bit.

Did you feel like fate was working against you? Your wheel breaks and then you got food poisoning last night.
Anderson: Yeah, I definitely feel like crap right now, but I’m all good.

What about you? At least you weren’t dealing with that, but was it weird today?
Plessinger: It was a little weird, but it was pretty normal. I didn’t really think of it that much because when you start thinking about it, it gets in your mind and gets in your head and that’s when you ride bad. So I tried not to think of it and just go at it like it was another race.

Aaron, we were always told how hard and serious and how difficult this is and how much pressure and stress and drama there is, but you just seem like you come into the races and you’re just hanging out. Is there a thing where not seeing how serious you are? I don’t think we ever see you do anything except what you’re doing right now, which is smiling and having a good time. Is it not like that sometimes?
Plessinger: Sometimes. Most of the time I’m pretty happy because I’m riding my dirt bike. I’ve wanted to do this my whole life. I’m just enjoying it and having a good time.

Aaron, I’ve been on Google for a minute and I can’t seem to find it. What does “outstandable” mean?
Plessinger: It’s in my dictionary. You don’t have it. Maybe check Urban Dictionary. We just mash words together sometimes. It usually works out right, but that one was a new one and it’s kind of struggling.

We’ve used the words “serious, normal.” Nobody has asked this yet. What’s the whole ensemble you’ve got going on there, flip-flops and a Trojan helmet? What’s the deal?
Plessinger: I don’t know, I just didn’t really feel like being too serious tonight. My truck driver had this in his cab, and flip-flops just because they’re comfy.