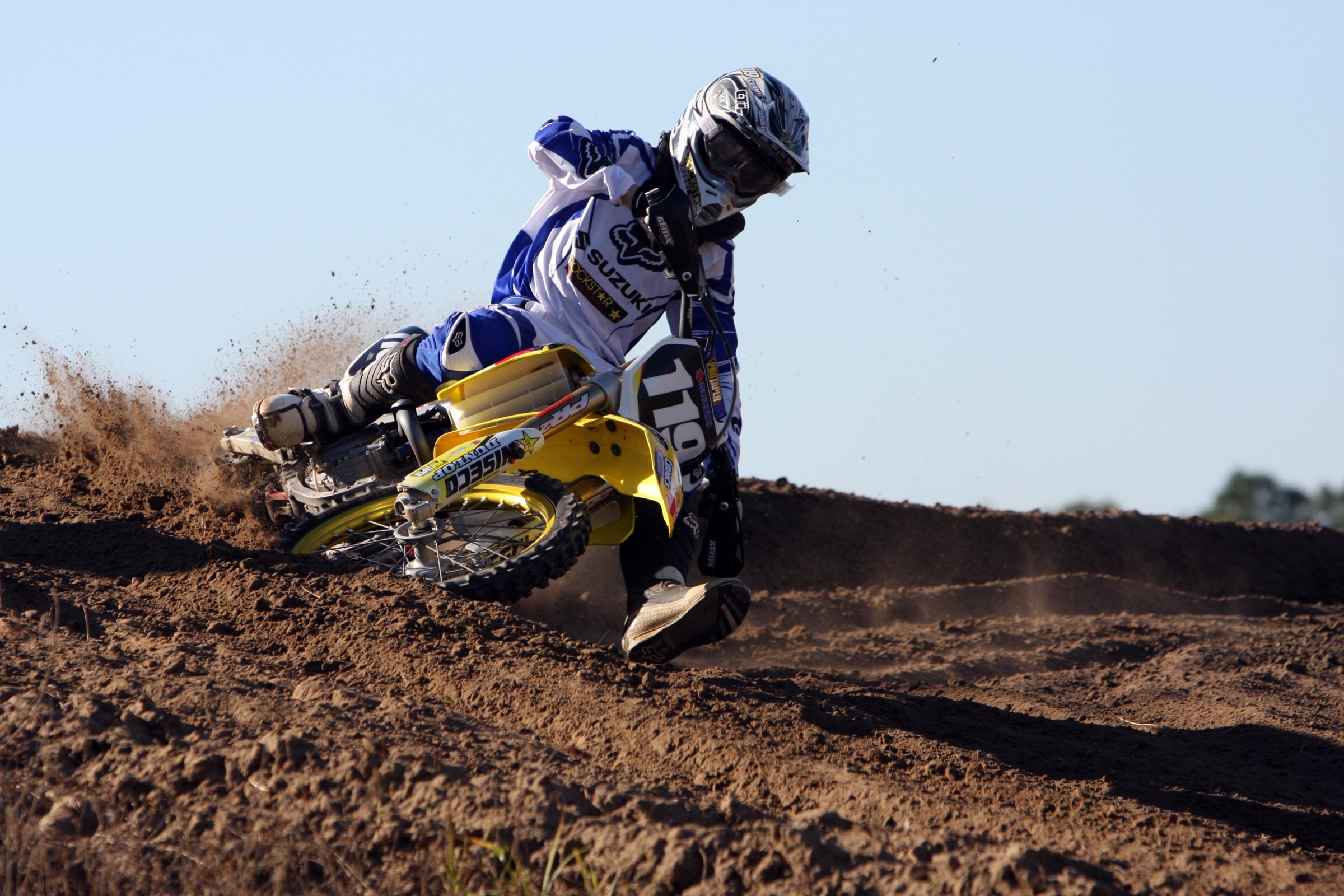 Where Are Ian Trettel

With four #1 plates and eight visits to the podium at AMA Amateur National Championship at Loretta Lynn’s Ranch, Ian Trettel was a shining amateur prospect. He clearly possessed the grit, speed, and determination to make it as a professional racer. He also had the support of his family and factory Suzuki, which certainly helps. Trettel was battling with guys like Eli Tomac and Jason Anderson, among others, and was winning races.

After winning the very competitive 250A class at Loretta’s in 2010, Trettel turned pro. But three races into his pro career, the ugly underside of motocross reared its head and it all ended abruptly. At the 2011 Daytona Supercross, Trettle crashed hard and suffered a severe traumatic brain injury, and his professional career was over before it really even began.

The crash was six years ago, and Father Time does not wait for anyone. Trettel has recovered from his crash and has moved on and forward in his life. We checked in with him to see how things are going and what he has been doing since recovering.

Racer X: Daytona 2011—you were three races into your professional career, if I’m not mistaken, right? That was when you crashed in practice?
Ian Trettel: Yeah. That year I raced Houston, missed Atlanta and then got hurt at Daytona. I had also raced the Southwick National in 2010 as well.

What are you up to now?
After the injury, well, I had the whole recovery thing. But we can fast-forward through that whole process. After I got better, I kind of spent some time soul-searching, trying to figure out what I was going to do. I went ahead and worked with my dad and my dad’s company for about three years, just figuring out what I was good at. I wanted to see what sparked interest in me and what was out there. My dad has a business in Graham, North Carolina, called Permatech, and this is what he’s been doing since I started riding. We manufacture aluminum for the aluminum industry. We have ceramic molds and stuff like that.

I ended up figuring out, the whole process of going through recovery, I really enjoy just helping people. I’m kind of a caregiver, I guess you could say. I sort of used some knowledge that I gained from the whole therapy process of fighting to get back to normal life and some of these mental strategies that I used to get through the injury, and I started training some people on the side. I was having a good time doing it. I noticed I was very good at it. I was doing mostly mental training.

I can only imagine how hard the recovery process was, and just how much work you did.
Well, it was super effective. And it changed my perspective on life. I guess I pay more attention now to what’s going on in racing. Safety is kind of being exposed right now in motocross. It’s almost like the new speed. I’ve been focusing a lot on that in my training classes I’m holding around here. So I’m doing a lot of event-style motocross camps with a focus on safety, and just kind of slow progression. It’s interesting the different perspective other than going for speed, just kind of trying to stay healthy and run things like a marathon rather than a sprint. So I’m back in Florida now. I’m doing this full-time and having a good time doing it. It makes me really happy doing it, staying involved and hitting more races now. I hit three supercrosses this year. Just kind of resurfaced a little bit, kind of reconnected with some of my old sponsors. Get more involved and see what comes up with me in the future of motocross.

What part of Florida are you in now?
I’m in Tampa now currently. I live with my girlfriend. I’m still super involved in fitness. I still work out a ton, as if I was still racing. I think that’s super important, to get within your goals and keep moving forward and innovating. I’m kind of a health nut, so I’m in the gym every morning at 5:00 a.m. and I get all my stuff done.

How long was the recovery period after your injury? A couple years, if I’m not mistaken, right?
Yeah. There were several phases of that. After Daytona, I went to the hospital. I spent a full month there in a coma. Then after that, I was transferred to Georgia, where I stayed at Shepherd Center Rehab Facility. I spent three-and-a-half, four months in Georgia doing inpatient rehab, learning how to do super basic stuff. Just eat and swallow and walk and doing simple stuff that you don’t normally think about. Then I did outpatient rehab until I could start working on my own. After that, I do all my own stuff now. I spent a solid two-and-a-half to three years just getting to where I looked like I was living a normal life again, where I was driving and doing stuff on my own again. It was a long process and very difficult.

Do you do any riding now?
I do not. I don’t ride anymore. The injury I sustained doesn’t allow me to ride anymore for multiple reasons. The physical deficits that I have, it wouldn’t be smart for me to ride a dirt bike. And I can’t afford to take any more hits to the head. Same reason Davi [Millsaps] and Broc [Hepler] kind of stepped out, too. I made the choice. I was like, I think I’m over it. It’s one thing for broken bones and stuff, but something like that comes up it really changes. It’s not so much a giving up of sorts; it’s like you’re given a second chance. You just got to be smart about it.

Where are you running your schools?
I recently became super good friends with the family that runs the WW Ranch Motocross Park that had MXGP this last year. I’ve been doing a few there, as well as a family that has a track up in Burlington, North Carolina, called Ball Creek. So I’ve been meeting a lot of cool facilities and been doing some of these camps at these local tracks that are either family-owned, kind of small operations that are super cool. There are other tracks around the state. I’ve been traveling a lot.

What’s your viewpoint on what’s going on out there with this season?
I think it’s becoming more important just to finish the season. I think that as new talent arrives, there’s always going to be that risk/reward scenario. I always tell my guys it’s like playing a game of risk versus reward all the time. You’re always going to have someone new coming up and pushing it. You see some of these guys like [Justin] Brayton, who just play it cool, and they’re always going fast in the top ten, but once in a while they’re coming across with a win. So it’s trying to find that perfect balance of just being mistake-free and showing good speed. I really feel like if you can just make it through the entire season being healthy and learning, you’ll end up reaching your full potential anyway. It’s always a million times smarter to play it safe rather than go for the speed and maybe that one race win that might cause an injury and missing half the season. We’re seeing people get hurt more than we ever have now. I think it’s more important to stay safe now as the speed progresses so much.

I think that’s certainly a valid point. These guys that are missing two or three seasons in row, and due to injuries….
We’re seeing it now more than ever. It’s always been a problem, but I think the guys are going so much faster and you’re starting to see it more, but it’s always been there. What I’ve noticed, too, with just the slow progression, you end up reaching your full potential anyway if you’re patient about it and just shoot to be healthy and maybe the finish the season.

Looking back on your amateur days, you competed against some great guys, names like Eli Tomac, Trey Canard, and Nico Izzi and many other top prospects.
My very first year at Loretta’s, I remember I raced with Eli. I remember racing him pretty much my entire career. Me and Jason [Anderson] were teammates our first year pro. I raced with Jason the last year of my amateur career. It was cool to watch them ride. It’s sometimes a little disappointing for me. I’m like, dang, I wish I was still in there. But stuff happens. You just take it with a grain of salt and just move on. No reason to dwell about it.

Do you have a website or anything?
I do. All of my stuff, you can find on social media. ITMX Training is my company that I’m running now. My personal stuff is just @itrettel; my mission to kind of find my next thing. I’m still working on finding that next niche of what my real interest is. I don’t think I’ll be doing the training forever. Just kind of doing it until I find something else that I’m really passionate about. But I’m sure it’ll be inside the motocross industry.