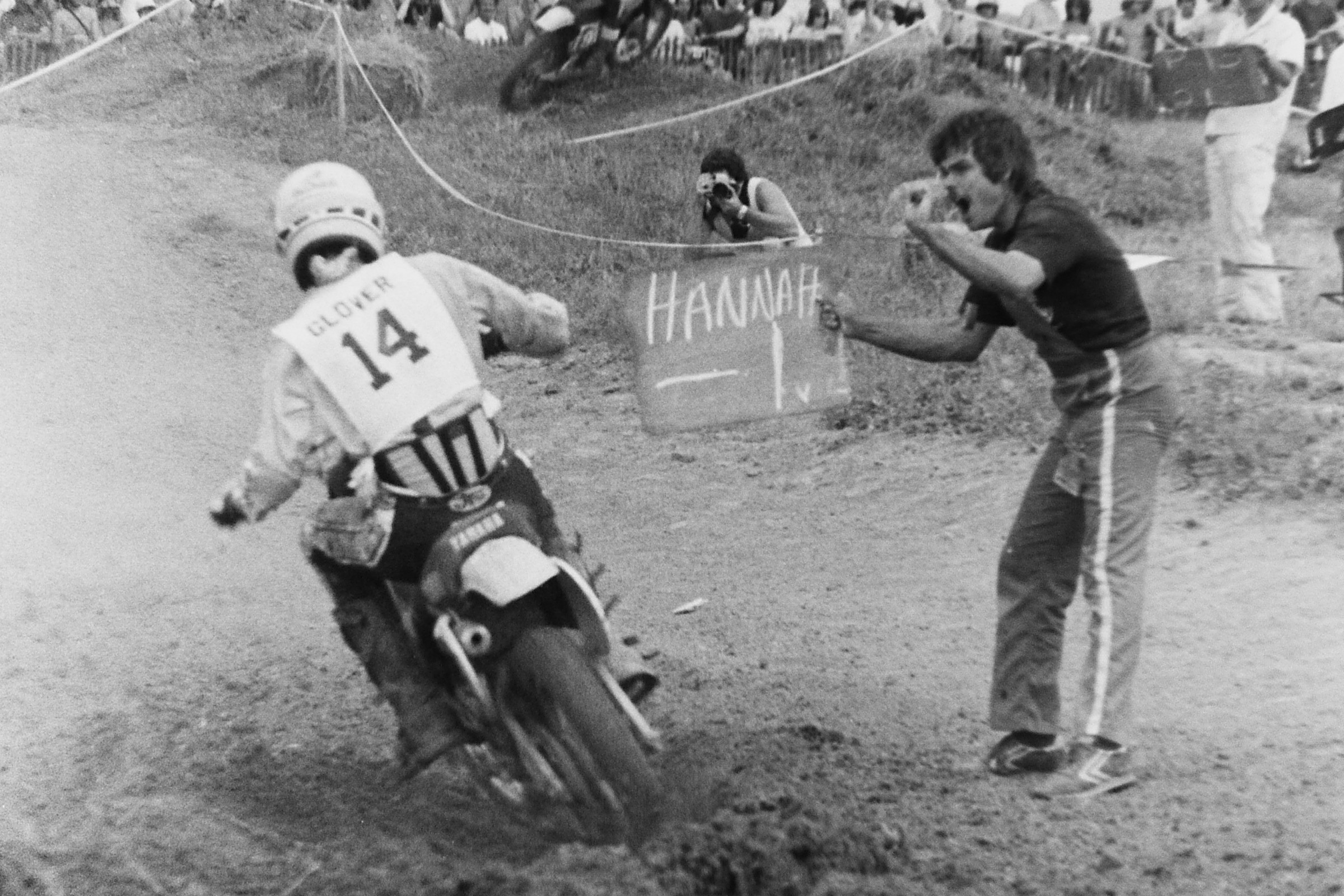 The return of the Monster Energy MXGP of the USA will take place on September 2-3 at WW Motocross Ranch in Jacksonville, Florida. The race will feature matchups of the best riders on the FIM Motocross World Championship circuit with some of the top AMA-based riders on a completely neutral track. In looking forward to the event, we’re going to count down the days to the new race by looking back at some of the most memorable U.S. Grand Prix races. Today we're looking at Mid-Ohio 1978 and Carlsbad 1984, two big race wins in a career full of them for Broc Glover.

Born in San Diego, California, on May 16, 1960, Glover would find his speed and form as a motocross racer on the hardscrabble CMC tracks of Southern California. He turned professional and headed out to the 125cc AMA Motocross Championship the same week he turned 16 years old. And he was competitive from day one. In fact, during his 12-year AMA career, the native of El Cajon, California, was always competitive, winning six AMA Motocross Championships—a feat that would stand alone for nearly 20 years. He also succeeded in the last ever iteration of the storied Trans USA Series. Furthermore, Glover was a member of triumphant American Motocross and Trophee des Nations teams, and last but not least, the first American racer to win the United States Grand Prix of Motocross in two different classifications.

In 1977 and at age 17, Glover signed-on with Team Yamaha to contest his first-full season as a professional. Four months and 18 days—and one hell of an uproarious season finale—later he was the new 125cc AMA Motocross champion. Glover’s title defense of ‘78 was steaming along like a freight train—he won four of the first Nationals—when Yamaha sent him to Lexington, Ohio, to compete in the Valvoline 125cc USGP at the Mid-Ohio MX track.

“It was the first time I ever entered a GP,” explained Glover the day before he put on his Dunlop hat and headed for Jacksonville, Florida, and the 2017 Monster Energy MXGP of USA. “I had barely turned 18. For me, the whole USGP thing was pretty special. Bob Hannah was entered in the race for Yamaha as he really wanted to win that race. That, and I think he probably wanted to rain on my parade. Come to think of it, Mid-Ohio might have been the first 125cc race Bob and I lined up against one another since the “Let Brock Bye” race the year before (Note: The season-ending 125cc AMA Motocross race at Cycle Rama in San Antonio, Texas, where Hannah let Glover pass him to give Glover enough points to win the 1977 125cc title over Team Suzuki’s Danny LaPorte). Bob rode the 250cc class in 1978 and the Unadilla 250cc USGP was scheduled a week after Mid-Ohio. I’m really not sure why Yamaha would have entered both of us in the Mid-Ohio race when the two of us could have Ohio and Unadilla.”

For the record, and after digging through the AMA race books, Glover was correct in that it was the very first time the two raced 125cc bikes against each other since that controversial day in Texas.

“Gerard Rond, one of the factory Yamaha guys, was there and he had the full red and white European Team Yamaha OW water-cooled bike,” said Glover, who would ride an air-cooled Yamaha that Sunday.

In the first moto Glover simply vanished, pulling the holeshot and quickly riding off to an astonishing 25-second lead. Hannah, who had already won 14 races in the AMA Supercross and 250cc AMA Motocross that season, ultimately made his way into second and charged hard to try and chase down his teammate, but it was to no avail as the Hurricane hit the dirt a few times in the last 10 minutes of the moto.

“It’s kind of fun to know that he had to crash to try and catch me,” laughed Glover when this writer read Jim Gianatsis’Cycle News race coverage from that day.

Glover led the way in moto two, while Hannah, who had to start the race from the second row, rode recklessly to try and get to the front. Before the first lap even ended, he had made a daring pass over a downhill double jump on Watanabe which resulted in a mid-air collision and a good old Midwestern yard sale. Dazed, Hannah found his way back onto his Yamaha and pinned it once again, a few laps later clashing with Honda’s Warren Reid and sending the man back to the pits with a tweaked wrist. Almost mercifully, it all ended a few laps later when Hannah pulled off with a flat front tire.

“I think I felt it going flat after crashing with Watanabe,” Hannah told Jimmy the Greek (Gianatsis) for Cycle News afterwards.

After a spirited battle with LOP privateer rider Marty Moates (who would place a brilliant third overall in the GP), Glover would motor away to the moto win and his first USGP victory.

“When you enter your very first GP ever and you win it, that can’t be too bad of a feeling,” said Glover.

“Yamaha’s Broc Glover finally did it: He won the American round of the 500cc World Motocross Championship at Carlsbad, as a 4-1 tally did the trick,” exclaimed Cycle News writer Kit Palmer in the Jul 4, 1984 issue. “For the past three years, Glover was denied victory at Carlsbad by slim margins, especially last year when Sweden’s Hakan Carlqvist snatched the win from Glover by fractions of a second.

“It feels great to finally get the win,” said Glover afterward. “I had a bad first moto so I didn’t have to work as hard, which gave me a lot of energy left for the second moto.”

This week, we asked Glover about his 1984 win, but he first wanted to talk about the ’83 USGP he lost to the late Carlqvist by a total of 3.871-seconds.

“This is funny, Eric,” laughed Glover. “I had lunch yesterday with Gavin Trippe (founding promoter of the Carlsbad USGP). Gavin’s a pretty clever guy. ABC loved the Carlsbad GP race because it had huge ratings. ABC told Gavin, point blank, after the ’83 race, that they were not happy at all that they had to wait 30 minutes to find out who was the winner on the race between Hakan and I because it was determined on combined lead time from the two motos. They said to Gavin, ‘Hey, listen, we’re all about The Thrill of Victory and the Agony of Defeat (the  catchphrase for the Wide World of Sports anthology show that ran the Carlsbad races) and we really want to stick a microphone and a camera in the face of the winner and the loser because it captures the emotion of sports right then and there. That’s what we’re all about and if we can’t do that and have to sit around for 30 minutes to figure out who won the race, we’re not interested in covering your race anymore.’”

Like everything else he did with the USGP, Gavin Tripp went to the FIM and got the problem fixed. For the 1984 USGP, the FIM would look the other way and used the AMA rule where the second moto victory would take precedence in the event of an overall tie. Although Glover would not need the rule in ’84.

After making a bad call on his shock for the opening moto, Glover was forced to deal with it and held on to place fourth on the teeth chattering, white knuckled Carlsbad circuit. However, the talk of the moto was the rear wheel of David Bailey’s works Honda, which had come unlaced and collapsed on itself, bringing the seemingly unbeatable leader to an abrupt halt.

“In 1984 David Bailey was on that awesome bike and he was on a roll,” conceded Glover. “Although I could get a lap or two around Carlsbad pretty quickly, my Air Hammer Yamaha was certainly a bike that slowed down a lot after it got hot. Even so, David should have won that day in ’84. No question about it. He was the fastest guy.

“It was hot and humid and when it was all said and done, it was just one of those races that was no way in heck the perfect day of racing for me,” continued Glover, who won the conclusive second moto after Bailey crashed with two laps to go. “It was one of those races that you can’t say you didn’t deserve to win, but in ’84, had David not crashed, I wouldn’t have won the overall. He crashed. Carlsbad had a way of doing that to people, including Roger DeCoster and myself and lots of other riders that could have, would have, should have. I had a would have, could have, should have in ’81, ’83, and ’85, but of those four times I rode the race, ’84 was the race I won.”

As we finished up our lengthy bench racing session, I asked Glover how important his two USGP wins were to him—both then and now.

“To me, nowadays, the current riders, and you can say for whatever reason, they don’t seem to care as much as we did,” he answered. “To me, with those GPs, yeah, it was cool to go out and beat the world’s best guys. And if there was ever a time where we should care to try and beat the world’s best guys, it’s that time now more than ever because right now, arguably, Europe is better than America.”