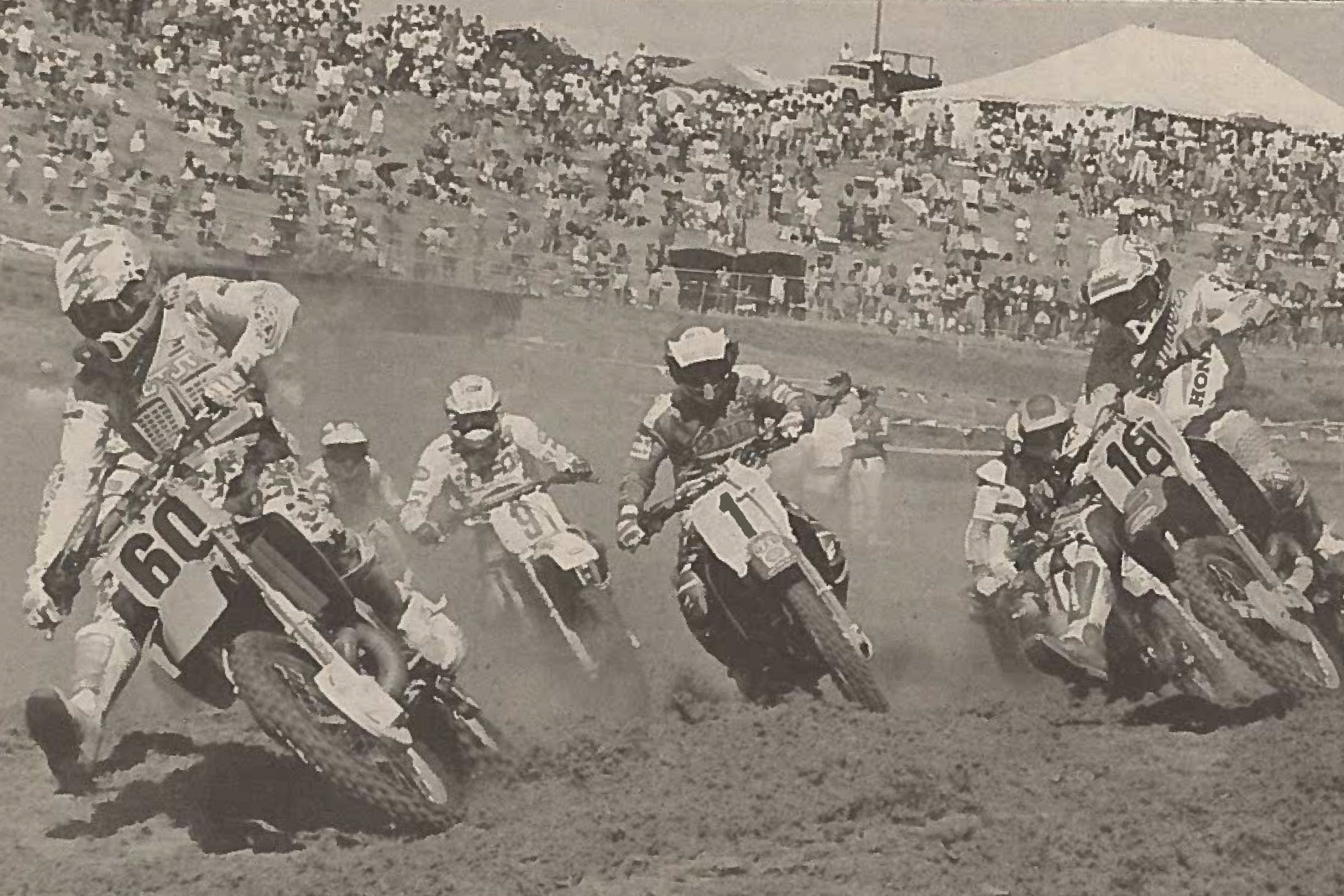 The return of the Monster Energy MXGP of the USA will take place on September 2-3 at WW Motocross Ranch in Jacksonville, Florida. The race will feature matchups of the best riders on the FIM Motocross World Championship circuit with some of the top AMA-based riders on a completely neutral track. In looking forward to the event, we’re going to count down the days to the new race by looking back at some of the most memorable U.S. Grand Prix races. Today we're looking at the 500cc USGP at Hollister Hills in 1989.

During a six-year span of races, the United States Grand Prix of Motocross was certainly a love-hate affair for Ron Lechien.

It was all champagne and roses in the beginning, when as a 17-year-old 250cc class rookie, Ron Lechien used 2-1 moto scores to convincingly win the 1984 FIM 250cc USGP at Unadilla in New York, making him the youngest rider ever to do so. From there, however, and as did many things with the Dogger, his performances at the USGP slowly went sideways. In 1985 Lechien, who hailed from El Cajon, California, entered the 500cc USGP at Carlsbad and after a brilliant opening lap which saw him whiz past 500cc World Championship contenders Eric Geboers and David Thorpe and clear off to an incredible lead, Lechien and his mighty Honda slid out on lap three, hitting the Carlsbad adobe in a thud. His race run, Lechien didn’t line up for the second moto (in typical Dogger lore, he pretty much admits he was already exhausted from fighting that mighty 500 around Carlsbad and called it a day).

In 1986, again back at Carlsbad for the 500cc USGP, and now on a Kawasaki, Lechien went 4-DNF on a forgettable day. Sent to Steel City in August of ‘87 by Kawasaki to race a KX125 in the USGP at Steel City, Lechien mistakenly slept through Saturday practice and when he showed up to race on Sunday was told by the FIM to go home. No Saturday practice, no Sunday race. Lechien left Pittsburgh an hour before the first moto. In 1988 the 500cc USGP was scheduled to run, for the first time, at Hollister Hills SVRA Park in Hollister, California. For Lechien, the race was a total washout as he crashed on the opening lap of the opening moto and didn’t bother showing up for moto two.

Then came the summer of 1989 and another shot for Lechien to bookend the ‘84 250cc USGP win. Interestingly, the story of the Dogger’s return to Hollister Hills SVRA Park for the seventh round of the World Championship 500cc MX series actually starts eight days prior in the parking lot of the storied Los Angeles Memorial Coliseum.

“My ’89 season had been up-and-down, but by this point I had been racing a lot and had probably raced myself into shape,” said Lechien while sitting in his office at Maxima Racing Oils in Santee, California, where he is an original owner and shareholder. “The week before the GP, I finished third at the Coliseum Supercross and I ended up hooking up with the Coors girl there that night. Then the next morning I was going to Idaho to meet John Gregory [founder of the JT Racing motocross clothing brand and Lechien’s sponsor] and they kind of captured me that entire week and flew me out there to Idaho where I went fishing and flying and hung around with John. It was all really cool and I went into the GP at Hollister that upcoming weekend thinking, ‘Well, I probably haven’t been partying like I normally would all week and I’m feeling pretty good.’ And I really liked Hollister because it was my kind of track—kind of hard and slick and dusty. It was just like the shit I rode on out by my house in California.”

Hollister was not high on most any American rider’s list. Back then there were two USGPs—Hollister for 500s and Unadilla for 250s—and riders had to pick one or the other. Unadilla was high on everyone’s list because it would also be hosting the last AMA National of the season in September. And the 500cc class was starting to lose its luster anyway as Suzuki had stopped making open bikes and Yamaha was no longer developing their YZ490. Of all the U.S. stars, only Lechien and Team Honda’s Jeff Stanton chose Hollister (Stanton also ended up riding the 125 Support class at Unadilla so he could learn the track and also show Team USA boss Roger DeCoster that he would be ready if called upon to ride the tiddler at the Motocross des Nations).

"I went there to win. I was on fire that day. Those guys had nothing for me. I was really good."

Flying in from the most recent 500cc Grand Prix run in Sweden two weeks earlier would be the titanic trio of Honda Racing Corporation racers Eric Geboers, Dave Thorpe, and Jeff Leisk. Belgian hero Geboers, the reigning 500cc World Champion who had won at Hollister the year before, was on fire, as were the Englishman Thorpe and the Australian Leisk. Furthermore, KTM riders Kees Van der Ven and Jacky Martens, who had finished first and second, respectively, in Sweden were also to be contended with. Nonetheless, Lechien was undaunted by the visiting GP stars.

“I really wasn’t intimidated by any of them,” explained Lechien. “I wasn’t worried about the Euro guys or Leisk at all because I beat Leisk at the ’88 Motocross des Nations in France pretty handily. I knew all about him. And the Euro guys, they would always come over and they wouldn’t hang it out because they didn’t like the conditions and they were just trying to get through the deal and get some points. That’s what it always seemed like to me. Those guys never seemed like they were just going to give it everything they had. They were just trying to get some kind of finish and get out of there. And I felt like at that time that we were the dominant nation. Those guys didn’t really bother me … they might of if I was over there on their land.”

When the gate dropped to send the 40-man field up the long Hollister Hills start straight to begin the opening 40-minute plus two-lap moto, it was Geboers and his HRC RC500 leading the way with Lechien and Stanton stalking the Belgian ace. It didn’t take long at all for both Lechien and Stanton to motor past Geboers, with Stanton poised to make a run at his American rival, but it wasn’t to be as he slid out in a rut and dropped all the way down to ninth place. While Stanton would recover and charge all the way back to third at the end, there was no catching Lechien who crossed the finish line 22 seconds ahead of Geboers.

“I just rode my own race and wheelied away,” said Lechien to Cycle News. “I didn’t have any problems with the track or lappers, but I did lap several people more than once.”

Stanton, understandably, was peeved at himself for the early race miscue that forced the recently crowned AMA Supercross Champion to move some of the world’s best 500cc riders out of the way.

“I needed second,” he sighed to Cycle News writer Ken Faught between motos. “That way if I win the second moto I’d be guaranteed the overall. Now, all I can do is hope I win and someone stays between me and Lechien.”

Looking back on the race, Lechien, even nearly three decades later, knew that Stanton wasn’t going to be able to beat him around the rolling, high speed Hollister hills come moto two.

“I felt like I had Jeff Stanton’s number any time I needed to beat him,” said Lechien. “He was obviously working at it a little harder than I was. When I was on and fresh, he didn’t have anything for me. He was working at it way harder than I was, and I like I said, on any given day when I was feeling it, he didn’t have my speed. He was just like a diesel, you know? He kept going and going and I’d tire out and then he’d get me. Looking back, it sucks now, but that’s what it was.”

With maybe 8,000 sunburned fans looking on, moto two was something of a thriller for the Hollister Hills contingent. Lechien holeshot the race, but was immediately displaced by longtime 500cc World Championship journeyman Billy Liles of Georgia. Out to leave a mark at his home nation GP, Liles fought hard, leading the first five laps of the moto before Lechien deftly passed him on a long and rough downhill. Stanton, who was also able to get around Liles and his Kawasaki, set out after Lechien in the closing laps of the GP, but it was not to be his day as his Honda gave up the ghost, the bike seizing and sending the Yankee off to the side of the track. With the California sun beginning to drop and the shadows lengthening, Lechien kept his cool and cruised to an easy moto win. It was to be an exclamation on a day of dominance he still thinks about today.

“The 500 GP was always on my bucket list of races that I wanted to win,” declared Lechien. “I went there to win. I was on fire that day. Those guys had nothing for me. I was really good. It was a memorable one for me and one that I always wanted to win. To win a 250 and a 500 USGP was awesome. It definitely was a highlight for me. It lost a little bit of its sparkle because it wasn’t at Carlsbad, but it still was the USGP and I won it.”

Two weeks later Lechien would win the 500cc National at Kenworthy’s in Ohio. It was the last win of his professional career, as the Dogger would endo at the Steel City National at the end of the season and suffer a broken femur. He would miss most of the next two seasons and never fully regain his legendary speed. But as everyone on hand that day at Hollister saw, when he was on, he was hard to beat.