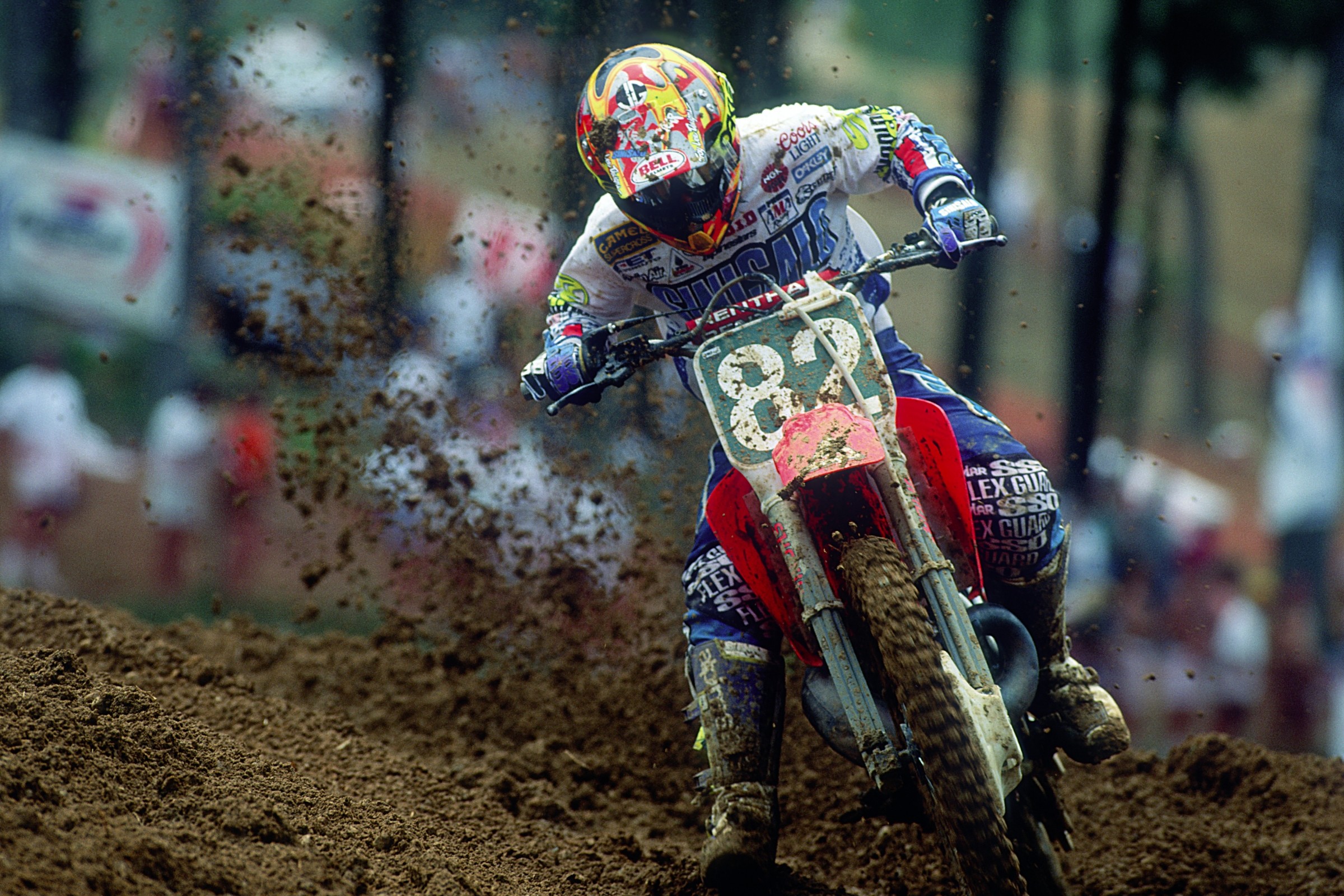 The return of the Monster Energy MXGP of the USA will take place on September 2-3 at WW Motocross Ranch in Jacksonville, Florida. The race will feature matchups of the best riders on the FIM Motocross World Championship circuit with some of the top AMA-based riders on a completely neutral track. In looking forward to the event, we’re going to count down the days to the new race by looking back at some of the most memorable U.S. Grand Prix races. Today we're looking at Budds Creek 1993.

From 1978 through 1992, the 250cc United States Grand Prix of Motocross was held at Unadilla in New Berlin, New York. Perhaps the greatest natural terrain motocross track in American motocross, the grassy hills, valleys, and meadows that made up the place were as world-class as the men who lined up to careen around them. Having said that, after the 1992 edition of the USGP promoter Ward Robinson, somewhat weary with money and logistical hassles with the Federation International de Motocyclisme, decided to call off hosting a Grand Prix at his upstate New York facility, choosing instead to focus upon his AMA Motocross National that continued to gain momentum since its inception in 1989.

Enter one Jonathan Beasley. A Grand Prix enthusiast almost to a fault(Beasley’s passion for World Championship motocross would sometimes get in the way of his business acumen), Beasley owned the Maryland-based Budds Creek Motocross Park, and in a fulfillment of a lifelong dream, made a deal with the FIM to host the 1993 version of the USGP.

“This place was a forest when I first got it,” Beasley pointed out to Cycle News journalist Chris Jonnum on race day. “I used to watch the race at Unadilla and dream about putting on a GP. The FIM stuck to their word with me, but is still a very expensive event to put on.”

In keeping to the dream theme here, Beasley and the Budds Creek Motocross Park were graced with an extraordinary lineup of talent for the Grand Prix. First, the 250cc classification had become the premier division in the FIM Motocross World Championship, so the very best riders from far flung corners of the globe showed up to race a mere 45 miles south of Washington D.C. Secondly, in past history, the U.S.-based racers had been forced to choose between participating in either a 500cc or 250cc United States Grand Prix. In 1993 this was no longer the case, and many of America’s finest made way to Mechanicsville, Maryland.

Foremost among them was the Team Kawasaki dynamic duo of 250cc National Championship contenders Mike Kiedrowski and Mike LaRocco; Jeremy McGrath— having just come off clinching the 1993 AMA Camel Supercross Championship in his rookie 250cc year—was also entered. McGrath raced the 125cc National Championship that summer, but was using Budds Creek as a trout for the ’93 Motocross des Nations set for Schwanenstadt, Austria, later that September. Team Suzuki standout Guy Cooper and Team Honda’s Steve Lamson were also part of the American effort. And so was Jeff Stanton, the veteran who had won the last three USGPs in a row at Unadilla.

In Sunday morning timed practice, it was reigning 125cc World Champion Greg Albertyn of South Africa leading the way, putting his #67 JHK Honda atop the timing sheets with a flying lap that stopped the clocks at two minutes, 17.54 seconds. McGrath was second fastest around the 1.1-mile circuit, just four-tenths back. In what was turning into a war of the world, as Grand Prix riders Stefan Everts (Belgium), Alex Puzar (Italy), and Werner DeWit (Belgium) completed the top five.

Not surprising due to his excellence in getting out of the hole in supercross, it was Jeremy “Showtime” McGrath leading the 40-rider pack out onto the Budds Creek circuit to begin the first of three 25-minute plus two-lap motos. Back in the first turn lay Stanton, who had the terrible luck of hitting a local newspaper reporter who didn’t realize he was literally standing in the first turn! Stanton hit the man, then shouted for a red flag, but the FIM officials let the race go on, and Stanton’s streak was over.

Just behind McGrath’s Honda were Everts, reigning 250cc World Champion Donny Schmit, Kiedrowski, and Albertyn. In the back section of the track, Everts had moved by McGrath and took off for daylight. By the fourth lap, the son of four-time World Champion Harry Everts had gapped McGrath by six seconds. A few laps later, Kiedrowski had also been able to move McGrath out of the way, but there was no catching Everts who crossed the finish line at the conclusion of lap 13 with a 10-second lead. Kiedrowski motored home second, with McGrath, Minnesota’s Schmit, LaRocco, and Albertyn rounding out the top six.

“I got a good start, which helped me quite a bit,” explained Everts back in the pit area. “I was second and then Jeremy made a mistake on the first lap. I passed him, and after that, it was fairly easy.”

Albertyn led the way up the steep uphill start to begin the second moto, with Schmit, Kiedrowski, LaRocco, and Puzar giving chase. Everts was in sixth and McGrath two spots back in eighth. Within a few laps, LaRocco had fought his way into second and was looking to run down Albertyn before sliding out at the base of a jump and ending up in the mud. Kiedrowski then took up the chase and he and the South African went at it until Albertyn failed to clear a double jump, thus allowing the American into the lead. Kiedrowski would win the moto ahead of a somewhat frustrated Albertyn and a hard charging Everts.

Yet again it was a holeshotting Albertyn leading the fray out of the first corner to begin the third and final moto with Schmit and Everts in his draft. Kiedrowski was back in 10th, with other slow starting Americans McGrath and LaRocco slotted in at 15th and 40th, respectively. Within a lap, Everts was up to second, and three laps later, chewing on Albertyn’s read rear fender.

On lap seven Everts suffered a small crash, but got right to his feet and got his Bieffe Suzuki up and running and soon repassed Schmit for second. From that point forward, Everts held station in second, and in doing so, won the USGP. And as both history and math would have it, Everts’ victory was something of a shocker as it was the first time the Americans had been defeated in a 250cc USGP since 1982 when Dutchman Kees van der Ven won at Unadilla on a KTM.

“It feels good to win in the States,” said Everts from the podium. “This is my first USGP because I hurt my spleen last year at Unadilla.”

Added Greg Albertyn who placed third in the Grand Prix with 6-2-1 motos scores, “I had a good time here in the U.S. It’s a lot like South Africa. I’d have preferred a win, but I had a good finish and I’m still in good shape for the championship.”