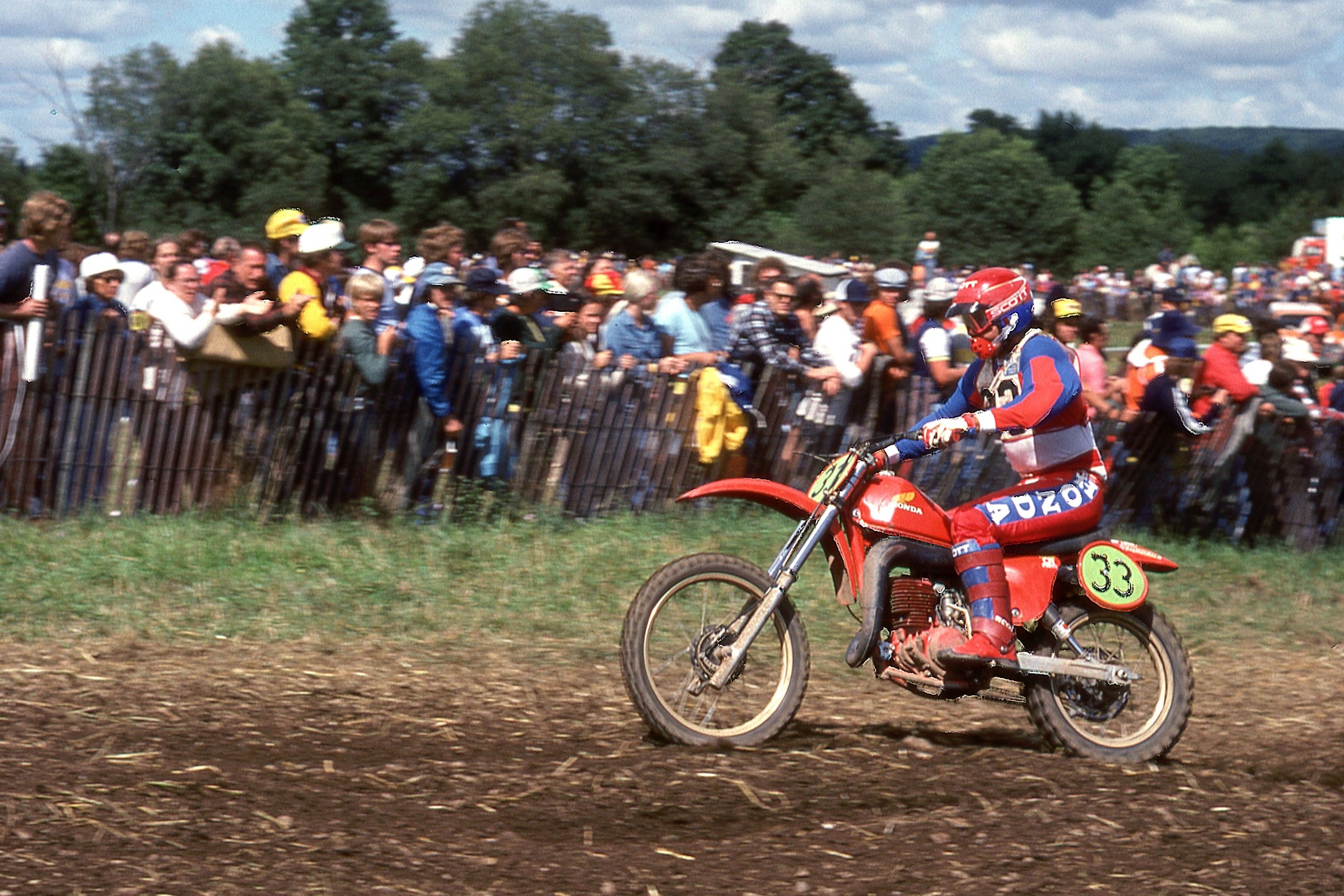 The return of the Monster Energy MXGP of the USA will take place on September 2-3 at WW Motocross Ranch in Jacksonville, Florida. The race will feature matchups of the best riders on the FIM Motocross World Championship circuit with some of the top AMA-based riders on a completely neutral track. In looking forward to the event, we’re going to count down the days to the new race by looking back at some of the most memorable U.S. Grand Prix races. Today we're looking at Unadilla 1978.

Beginning in 1973 the 500cc USGP was held at Carlsbad in Southern California. Two years later, the first 125cc USGP was held at Mid-Ohio. In 1978, a third USGP was introduced, this time for the 250cc class. The sight chosen was one already familiar to international riders, as upstate New York’s Unadilla hosted Trans-AMA and Inter-Am races beginning in 1970. The track, located on Ward Robinson’s farm, was as European as it got in America back then, with thick, tall grass on a completely natural valley course with some incredibly steep climbs.

Unadilla also had a very raucous crowd, and they always bought into the US-versus-Them mentality of American riders defending American property. But they weren’t very lucky in those early years, as European riders—and most specifically Roger DeCoster—always emerged victorious at Unadilla. Roger’s luck at the Unadilla 500cc Trans-AMA races were much different than it was at Carlsbad, and he won that round of that series five straight times in the seventies.

Fortunately for the Americans, DeCoster wasn’t going to be at the first 250cc USGP—he was racing the 500cc class and riders were limited to racing just one class each season. Instead, the fans would see much more mysterious competition, from countries on the other side of the Iron Curtain in the communist Eastern Bloc of Europe. The defending 250cc World Champion was Gennady Moiseev of the Soviet Union (now Russia). Moiseev was actually a major in the Soviet Army, and he had never raced in the U.S. before. Same goes for his teammate Vladimir Kavinov. They were extremely fast and fit KTM riders. The Czech rider Jarosloav Falta would also be there on a CZ, as well as German Maico rider Hans Maisch and Sweden’s Thorlief Hansen and promising young Swedish rider Hakan Carlqvist.

The Americans were led by the irascible Bob “Hurricane” Hannah of team Yamaha, easily the fastest rider on the AMA circuit. Hannah was dominant in ’78, and he would win both the AMA Supercross and 250 Pro Motocross Championship. He would be joined by a bunch of fellow future AMA Motorcycle Hall of Famers: Team Honda’s Marty Tripes, Jimmy Ellis, and Steve Wise, as well as Suzuki’s Kent Howerton and Husqvarna’s Chuck Sun.

Back then Unadilla was much more loamy than it is now, not to mention five times rockier. With nice weather working in their favor, the American riders were set to put up serious resistance to the visiting Grand Prix riders. Egged on by race announcer Larry Maiers, who liked to refer to any rider of non-American descent as “a communist,” the crowd was whipped into a frenzy before the gate even dropped. When it did, all eyes were on Hannah, but Unadilla’s favorite son threw his chances of an overall win away with crashes. He would have to settle for a fifth place finish for the moto. But the red-white-and-blue-clad Ellis and Tripes were up for the occasion. They finished first and second, with the German rider Maisch third and Howerton fourth.

When the second moto started and home riders Hannah, Tripes, and Ellis got right out front, the place went crazy. They would finish 45 minutes later in that order, with Sweden’s Hansen the highest-placing European in fourth. At that point it appeared that Ellis was the overall winner, given that his 1-3 scores meant 25 championship points, while Tripes’ 2-2 was only worth 24. But the FIM was scoring based on elapsed time between the two motos, not championship points, and it was determined that Tripes had combined moto times that were 0.6 seconds better than Ellis. With that Marty Tripes became the first winner of a United States 250cc Grand Prix.