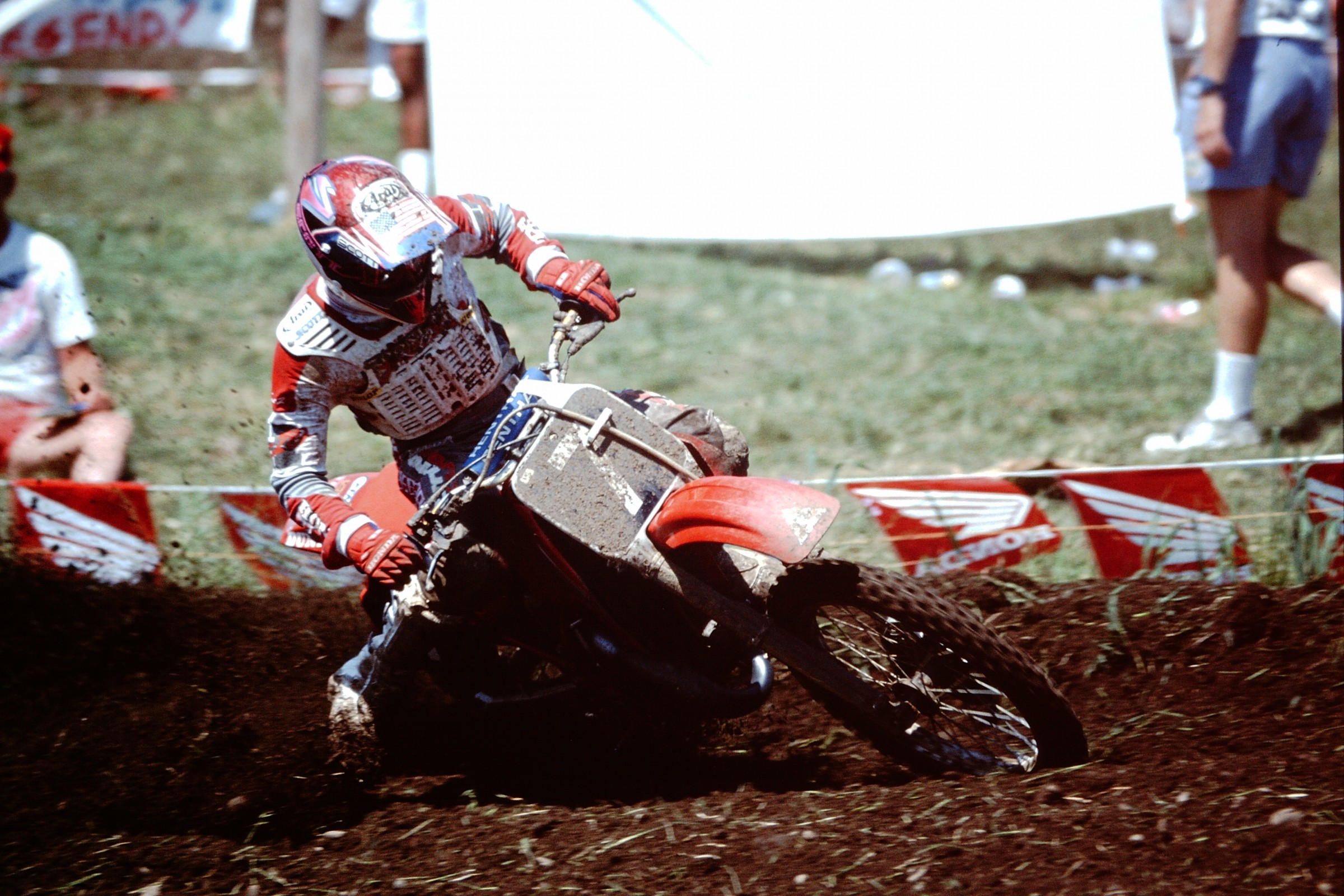 The return of the Monster Energy MXGP of the USA will take place on September 2-3 at WW Motocross Ranch in Jacksonville, Florida. The race will feature matchups of the best riders on the FIM Motocross World Championship circuit with some of the top AMA-based riders on a completely neutral track. In looking forward to the event, we’re going to count down the days to the new race by looking back at some of the most memorable U.S. Grand Prix races. Today we're looking at Unadilla 1989.

The 1989 Unadilla 250cc USGP might have been part of the FIM Motocross World Championship, but it was the absolute intersection of generations in American motocross. Somehow this one race represented some of the best of the 1970s, 1980s, and 1990s all in one day, with history made in all directions.

It didn’t quite seem that way at the time. Coming into the race, the motocross world only knew of one such dramatic storyline: Unadilla 1989 would be Bob Hannah’s last race ever. The Hurricane and Unadilla shared a special bond, so it was a fitting place to end it. Since Hannah had won the 1986 USGP there, was part of the victorious Team USA at the Motocross des Nations there in 1987, and finished second to Rick Johnson at the 1988 250cc USGP there, he was even considered a contender to win his last race. Alas, it didn’t happen—Hannah charged hard from the back as usual but went 9-12 for ninth overall. He took a lap of honor before the race, but the fans started flooding the track! Hannah had to cut the track to get back to starting gate in time.

“You guys have treated me great,” said Hannah after his lap. “You’re not losing a king since a new one has stepped in—Rick Johnson.”

Yes, Johnson was the king of motocross in 1989, but Unadilla was a significant race. Johnson started his AMA Supercross title defense that year with five-straight wins, but got landed on at the AMA National Motocross opener in Gainesville, Florida and suffered a broken wrist. At the time, no one realized how significant the injury would be, so while Johnson’s young Team Honda protégé Jeff Stanton took over the winning, most fans expected Johnson to return to his place at the top once the wrist healed. And Unadilla, Johnson’s second race back, only backed up those hopes.

The real intersection here was between Johnson and Frenchman Jean-Michel Bayle, who at the time was leading the 250cc standings, but already had eyes on America. Bayle had the buzz and the hype and Johnson wanted to see what the new kid, who would be joining Johnson at Team Honda for 1990, had in the tank. In the first moto, Bayle took off with the early lead, but at the halfway mark Johnson put the hammer down, reeled him in and passed him.

“I knew if I kept him in sight it would mess up his head because he’s been running away (in other GPs),” said Johnson to Cycle News.

Johnson took off from there, scoring the moto win over Bayle. Johnny O’Mara was set to finish third until he ran out of gas late in the race—just like he did in 1986.

“The boss is back,” said Honda’s Roger DeCoster.

Not quite, as it would turn out. Johnson mentioned after the race to Cycle News that his hand still hurt and the final laps of the moto were tough. Those words would prove prescient. The wrist would continue to bother him and in fact get worse. Johnson also says today that Unadilla, a wide open track that leads to a lot of pulling on the wrist, felt better. Slower tracks that led to more pushing on the bars would lead to his undoing.

Within a year Johnson was no longer the king of the sport—Stanton and Bayle were now fighting for Johnson’s old championships. At Unadilla that day in 1989, Stanton was there, but riding the 125cc support class, because he had raced the 500cc USGP earlier that year, and riders could only compete in one GP class per season in those days. This Unadilla race would be Stanton’s only pro race ever on a 125—he was trying to prove to DeCoster he would be a worthy pick for the small bike for the des Nations. He went 1-1, beating that year’s top 125 riders Mike Kiedrowski and Damon Bradshaw. Stanton would never need to race a 125 again, though. By the time des Nations rolled around, Johnson was struggling with the wrist, and Stanton got the 250 spot.

Bayle would fulfill his American dreams by heading to the U.S. full-time with the 1989 250 World Championship on his mantle. He would revolutionize the sport by sweeping all the major AMA Championships in 1991. During that season, Johnson would retire, the wrist never coming back around. Thus between Hannah, Johnson, Stanton, and Bayle, Unadilla 1989 became the intersection of everything—and a race Johnson can look back on with pride.