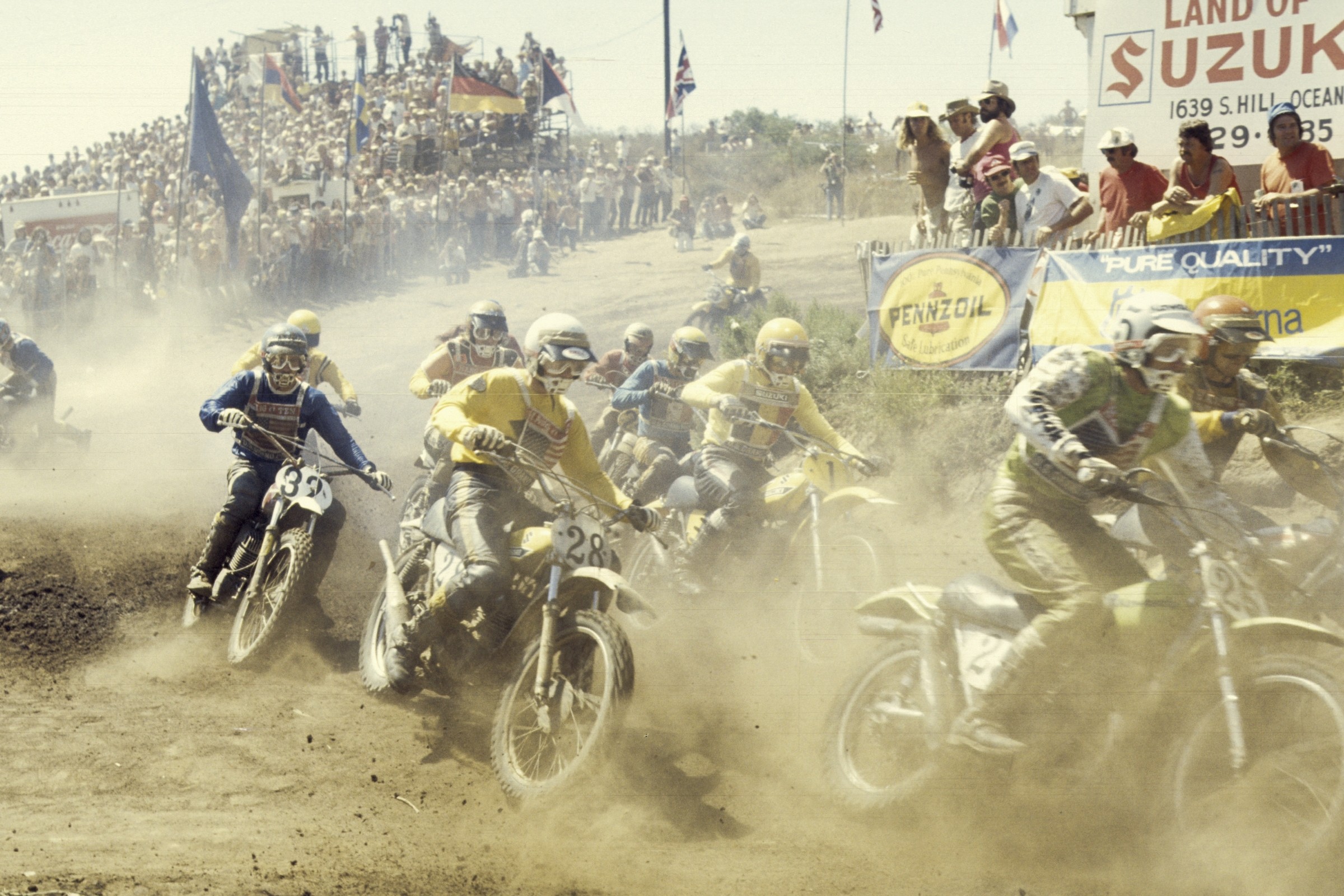 The return of the Monster Energy MXGP of the USA will take place on September 2-3 at WW Motocross Ranch in Jacksonville, Florida. The race will feature matchups of the best riders on the FIM Motocross World Championship circuit with some of the top AMA-based riders on a completely neutral track. In looking forward to the event, we’re going to count down the days to the new race by looking back at some of the most memorable U.S. Grand Prix races—the history of which begin with our first race here, the 1973 Hang-Ten 500cc U.S. Grand Prix at Carlsbad Raceway.

The story of the race begins in 1971, when Southern California (by way of Great Britain) promoter Gavin Trippe lobbied the FIM (Fédération Internationale de Motocyclisme) to bring a round of the 500cc World MX Championship to America. The sport was fairly new here, but the appetite was growing to see European stars like Joel Robert, Roger DeCoster, Adolf Weil, and more. The FIM okayed the event, but not before Trippe did a couple of other international events. So in ’71, the Trans-AMA round scheduled for Carlsbad Raceway was redubbed the First International 500cc Motocross United States Grand Prix. The race had a $15,000 cash purse and included three motos. The winner was Sylvain Geboers on a Suzuki. No FIM World Championship points were awarded.

For 1972, the Trans-AMA race at Carlsbad was once again co-branded as a Grand Prix, though it once again did not offer any FIM points. The winner this time was Maico-mounted Swede Ake Jonsson, who actually swept the last nine rounds of the series that fall. The difference this time was that Trippe talked ABC into covering the race on Wide World of Sports, which they agreed to, so long as Bruce Brown—the filmmaker responsible for Endless Summer and On Any Sunday—agreed to direct the coverage.

Finally, on June 24, 1973, a standalone 500cc U.S. Grand Prix of Motocross would be held at Carlsbad Raceway, as part of the 1973 FIM 500cc World Championship. ABC’s Wide World of Sports would be there to cover it, although the race would not air until later that fall. No matter, the best riders in the world (led by defending 500cc World Champion Roger DeCoster of Team Suzuki) and the best riders in the United States (led by Kawasaki’s “Bad” Brad Lackey) would meet on one of the most popular racing circuits in America.

Wrote Mitch Boehm for Moto Retro Illustrated: “Carlsbad. The word itself is magical to motocross fans, especially those who followed the rise of the sport in the U.S., and even more so to SoCal fans who packed the dusty, dry arroyo just north of San Diego and only a mile or so east of the Pacific Ocean during the ’70s and early ’80s.” (Mitch’s entire feature on that first Carlsbad USGP ended up on the MX Large site.)

Marching bands on the starting line opened the ceremonies, and a massive crowd attended the race, which was sponsored by local surfwear company Hang-Ten, a huge brand at the time. Once the race got underway, German rider Willi Bauer won both motos on a 400cc Maico, holding off DeCoster in the first moto and then his own Maico teammate Gerrit Wolsink in the second. (One year later, Wolsink would return as DeCoster’s Suzuki teammate and begin a domination of the Carlsbad circuit that would see him win the event five times in six years.)

As for DeCoster, he suffered a broken shock in the second moto, and that seemed to mark the beginning of his “Carlsbad Curse,” which saw the most popular motocross rider in the world in the 1970s never actually win the biggest race in America, a country he was destined to live in as soon as his own professional career ended in 1980.

The Americans looked good—at times, anyway. Lackey would run up toward the front of the first moto, and Gary Jones would briefly lead the second until the frame on his Honda Elsinore 450 snapped and caused him to DNF. Lackey’s eighth overall made him top American.

We tried to find footage of that first true USGP in 1973 from Carlsbad but didn’t have any luck, though our publisher Scott Wallenberg’s dad, Wally, was there with his Super-8 camera to make a short home movie, which you can see below.

And here’s a gallery from the first 500cc USGP, courtesy of Dirt Rider.

The Carlsbad 500ccc U.S. Grand Prix would run through the mid-eighties. For a while, it was the biggest race on the calendar, but once Americans caught up and started winning, the luster of the event wore off. Carlsbad was also under the constant threat of demolition in order to commercialize the land it sat on. It held on for close to 20 years before it fell under the blades of bulldozers and skid-steers making room for roads and buildings. Now it’s a ghost track.