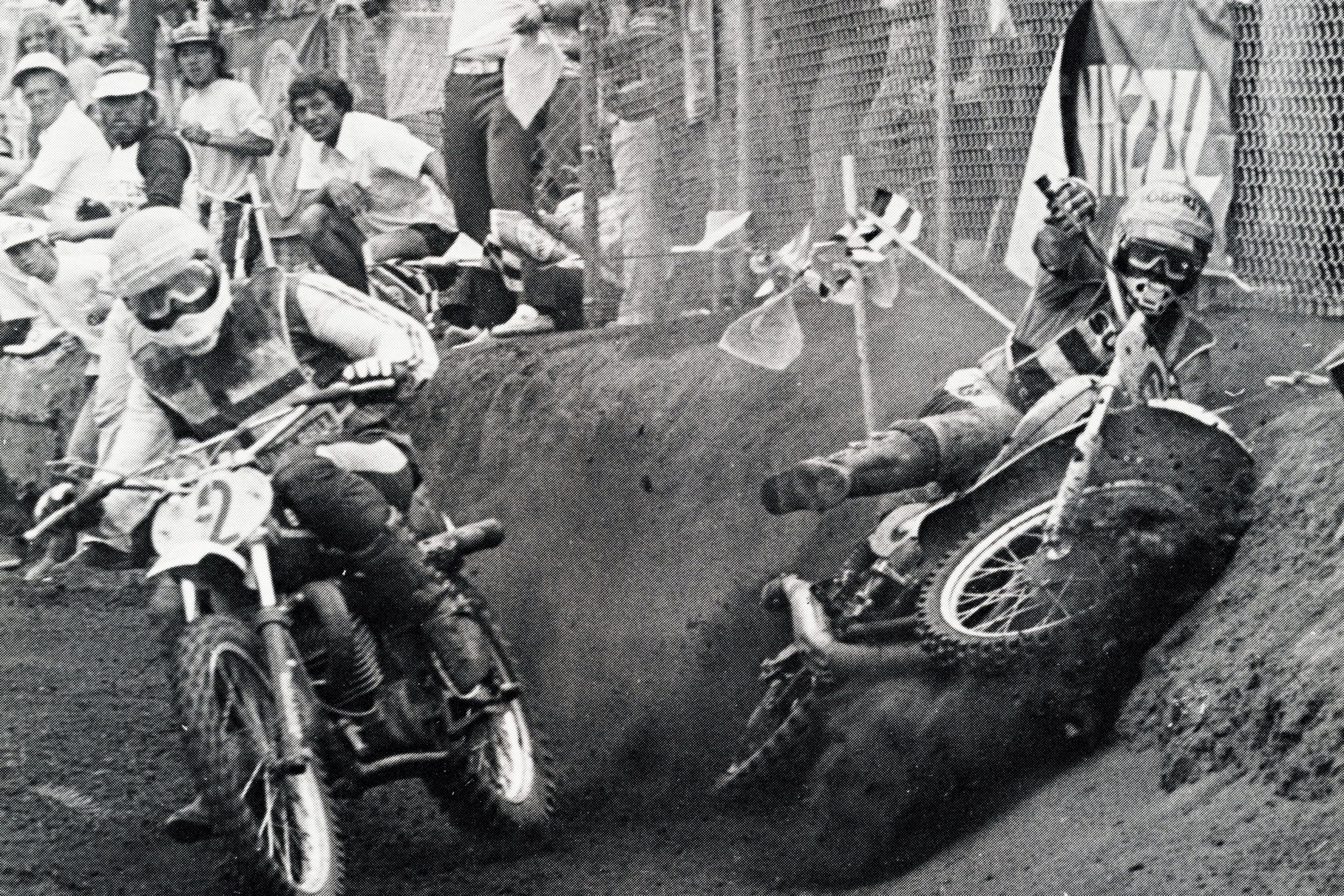 The return of the Monster Energy MXGP of the USA will take place on September 2-3 at WW Motocross Ranch in Jacksonville, Florida. The race will feature matchups of the best riders on the FIM Motocross World Championship circuit with some of the top AMA-based riders on a completely neutral track. In looking forward to the event, we’re going to count down the days to the new race by looking back at some of the most memorable U.S. Grand Prix races. Today we're looking at Carlsbad 1974.

The 1974 Carlsbad U.S. Grand Prix might have been the closest race in the history of USGP races. It also nearly didn’t happen. After a successful first stand-alone USGP in 1973, won by Maico rider Willi Bauer, Carlsbad was not on the provisional schedule when the 1974 500cc Grand Prix calendar was released by the FIM. Promoter Gavin Trippe had to do some wheeling and dealing to get the race back, and it finally happened after he struck a deal with the Eastern Bloc nation of Czechoslovakia where they would give up their ’74 date with the promise that they would host the 1975 Motocross des Nations, which the Czechs ultimately won. So Carlsbad happened again in ’74, and it literally went down to the last corner.

In 1974 Suzuki’s Roger DeCoster seemed set to win his fourth straight FIM 500cc World Championship. The elegant Belgian was the most popular motocross rider on the planet, not to mention the sport’s biggest ambassador. He was a regular visitor to America, and the USGP at Carlsbad, which aired on ABC’s Wide World of Sports, was the perfect vehicle for him. But the previous year he was beaten by Bauer, and now in the summer of 1974 he was locked in a titanic battle with a new rival, Finland’s Heikki Mikkola.

The Flyin’ Finn, an early pioneer in motocross training, had moved up from the 250cc class and was giving DeCoster fits, winning five of the first six motos of the series. The Man began the season with a slew of mechanical problems, but had fought back and was hoping to turn the tide back on Mikkola at Carlsbad, only to have his teammate Gerrit Wolsink show up and steal the show.

Mikkola would come to Carlsbad with a 25-point lead on DeCoster and German Maico rider Adolf Weil, which put him nearly two motos ahead, according to the old GP scoring system, where first-place paid 15 points, 12 for second, 10 for third. There were only eight motos left in the series, and DeCoster promptly went to work in the first race at Carlsbad. After Wolsink took the early lead from U.S. Husqvarna rider Gary Semics, DeCoster hounded his teammate for the first half hour of the 40-minutes-plus-two-laps moto. As the time wound down DeCoster made a pass on Wolsink (nicknamed the Flying Dentist because he was an actual dentist during the off-season) and pulled away. Wolsink’s gearbox was acting up and he later said he didn’t go back after DeCoster because he was afraid he wouldn’t make it to the finish if he pushed any harder. With Mikkola back in fourth it was a big points grab for DeCoster.

Wolsink got out front early again in the second moto, DeCoster again a nearby second, U.S.-based Yamaha rider Pierre Karsmakers third, and Mikkola again fourth, but this time Mikkola was up for the fight. First Karsmakers played the spoiler, racing past DeCoster and holding him off as Mikkola closed. Forced to make something happen on the rough and rocky track, DeCoster forced a pass on Karsmakers with an unfamiliar line. Unfortunately he hit a rock and broke some spokes in his front wheel, as well as his hub, rendering his front brake useless (and after the race he would have words with Karsmakers). It only took Mikkola one half of the next lap to pass the ailing Suzuki of DeCoster, who would finish third and salvage as many points as he could.

Mikkola kept charging and soon caught Wolsink in the waning laps. The last lap was an all-out sprint for both, and when they reached the last corner both kept it pinned. Wolsink flashed across the finish line just ahead of Mikkola, then crashed spectacularly into the outer wall that the riders had been using as a berm. Wolsink had his first of what would be a record five USGP wins at Carlsbad, and ABC’s Wide World of Sports would have the best race you could ever ask for to share with their audience.

As for Mikkola and DeCoster, Heikki held Roger off for the title, only to lose it back to DeCoster in 1975. In 1976 they would both be world champions, DeCoster in the 500cc class (for the fifth time) and Mikkola in the 250cc class. When they met again in ’77, Mikkola on a Yamaha took the title back and then added another in ’78. Add it all up and between 1971 and ’79 either Roger DeCoster or Heikki Mikkola were the 500cc World Motocross Champion.