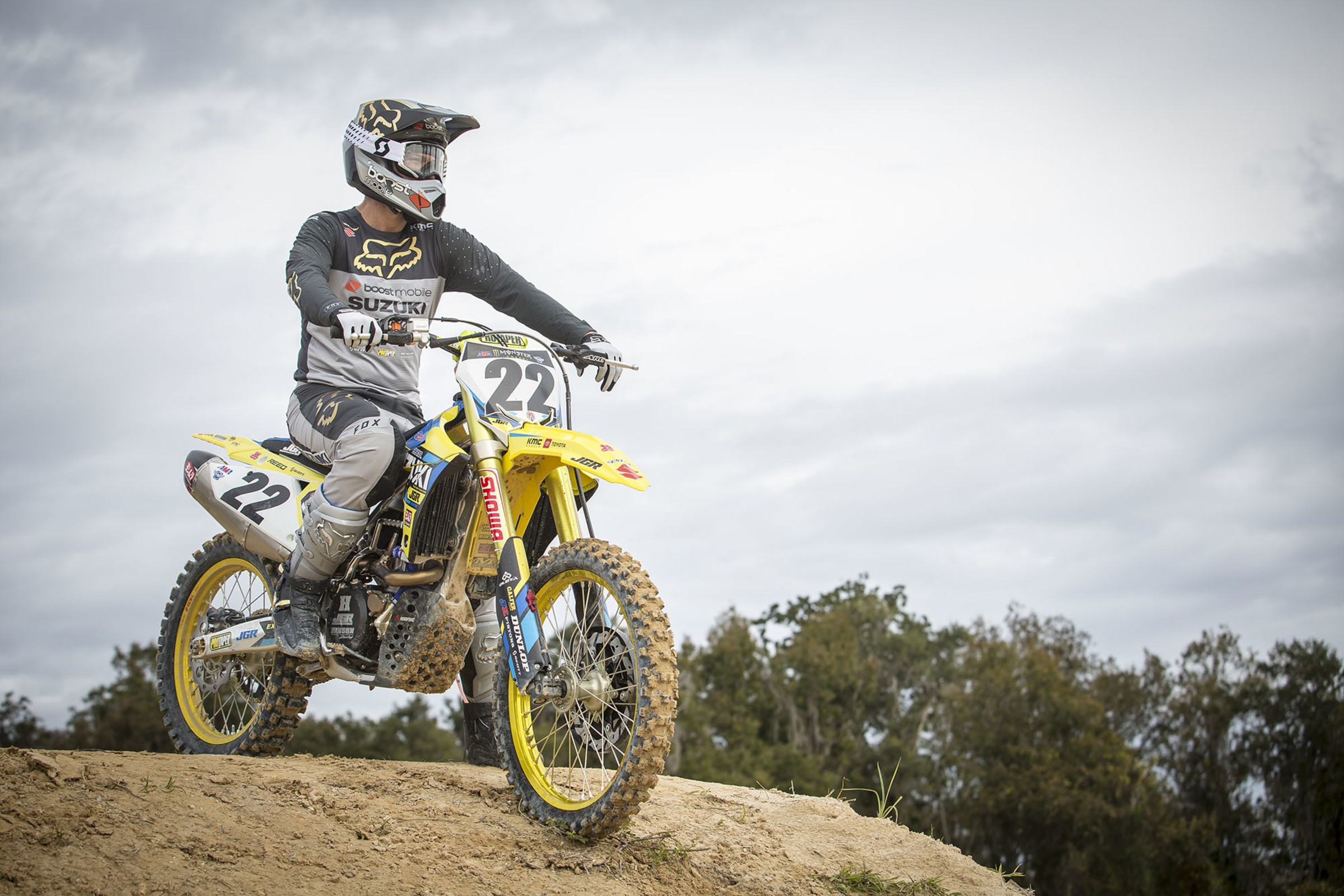 Since Chad Reed rode the Ironman National last August for the JGR/Yoshimura Suzuki team, it appeared like it was a simple process to get him signed up for the squad for 2019. Behind the scenes, it wasn’t nearly that easy, as the team lost a title sponsor and Reed’s attempts to find funding from some of his old TwoTwo Motorsports contacts didn’t work either.

Still, the JGRMX gang stepped up when needed, keeping its full four-rider 250SX lineup, and giving Chad a 450SX deal for 2019 (we hear JGR still doesn’t have all of its outdoor lineup figured out yet, since it’s very hard to predict Weston Peick’s timetable to return from injury.)

Reed is joining the team in more ways than one. He’s not only racing for JGR, but he’s selling his house and track in Florida and has already moved his whole family to a new house in North Carolina. This is part of a long interview we did with Chad last week after his JGR deal became official.

Racer X: You’ve said you weren’t going to run your own team again. Does that mean, for the first time, you actually had to square up with the idea you might not go racing at all?
Chad Reed: I would say that, and I’ve said it before, I’ve done a few interviews lately, the common thing for me, after supercross, immediately I was like “Dude, from a racing standpoint that was not fun. I didn’t enjoy it.” Something needs to change, that was way below my expectations and way below what I was able to do in the past. More than anything, I knew the facts behind it. I didn’t feel like “Oh my gosh, I’m 36 years old, my body hurts, I can’t train.” It wasn’t anything like that. It wasn’t age restricting me. It was just the single fact that I had an injury at the wrong time, and it took me a long time to come back from it. So right after supercross, that box was ticked. I wasn’t not going to build my own team again. That was one thing, and I guess when you come to that realization that you’re not going racing on my own, you put yourself in a vulnerable place. You have to confront, “I’m not racing on my own.” Right? That means I have to get a job.

Yeah, if you don’t get a ride, you’re done.
If I don’t get a factory ride, then I’m done. I don’t want to do it for any less than a factory ride. I feel like I deserve it. I’ve won titles, I’ve won more races than anyone else currently racing, and I feel like I’m willing to put in the work to get results for whoever is willing to take a gamble on me. One thing led to another in August, I ended up getting the chance to race a national for this team in August, and one thing led to another and now here I am on, in my opinion, the best bike and team for me, currently today.

So how different does this all feel? You’ve been riding at your place in Florida for what, 15 years?
Yeah, I’ve been in Florida for 16 years. Driving down the same road, going to the same place. Same circumstances—did the track get watered? Did it get overwatered? When you’re the boss, you’re responsible for it, and I should also say, you’re responsible for somebody. So now I feel light and I feel free of the bullshit. There’s always bullshit in racing, let’s be honest, but I feel free and light because I don’t have to babysit. I show up and everything is taken care of. The track is ready, the motorcycle is ready, all I have to do is show up.

The weather, yeah, you guys had snow last week, and there’s only a little ice and snow in the parking lots, my kids are honestly pretty pissed off because you guys had quite a bit of snow for December, and I showed my kids some pictures of, “Hey this is where we’re going next week.” So then they’re bummed like North Carolina is a myth, it doesn’t actually snow there. Which I’m totally okay with that! It actually doesn’t feel that weird, this has actually been a home away from home for me since August. I’ve been driving these same roads and through these same neighborhoods. The only difference is now when I’m done riding I get to go home to my family. And that’s awesome.

American fans last saw you race in person at Monster Energy Cup. You did some other off-season races. Are those races any indication at all of how you’re riding, or should we just wait until Anaheim to see how he’s doing?
Um, I’m trying to think how I would answer that. Going to Australia, I won my heat race—speed wise I wasn’t off. I was a little off on practice times in Oz, but I think a couple of different situations and starts in the main events in Australia and I think I was easily a top-three guy. I crashed out of third in the first race. I went to New Zealand and I won all three races pretty easily. The last one, [Justin] Brayton was right on me, and I felt good and comfortable and confident in what I was able to do then. And that guy has been winning a lot of the off-season races, he’s been on the podium, he won a race last year. So yeah there’s a part of me that feels not that far off. I’m 36 years old and I’m not supposed to win races, but I feel like that’s the past. I believe I can. That’s what motivates me day in and day out. That’s why I’m here, to be the best that I can be. It’s not really anything else at this point. That’s what I love about my age. I honestly, I wouldn’t change anything. I wouldn’t turn back time even if I possibly could. I feel like I’m at a good point, I’m happy, whatever my position is is what it is, you just continue to make it work and make it better. So let’s see. I wouldn’t be surprised to surprise some people, and I have some goals. I think they’re realistic.

So when you’re on the bike, you feel good? Of course we never know how that is going to translate for sure when we get to the races, but as of now, you feel good.
Yeah. I don’t feel bad. I don’t feel far off at all. Like I said, Australia and New Zealand didn’t go terrible, I got a third in the last race at Monster Cup, and I truthfully wasn’t stoked on how I rode there. I felt like I left a lot out there, and we’ve come a long way with the bike since then. Yeah I’d be lying if I didn’t think I could be competitive at some point this season.

Listen to the entire Chad Reed interview below or by searching Racer X Podcast Network on your favorite podcast app.