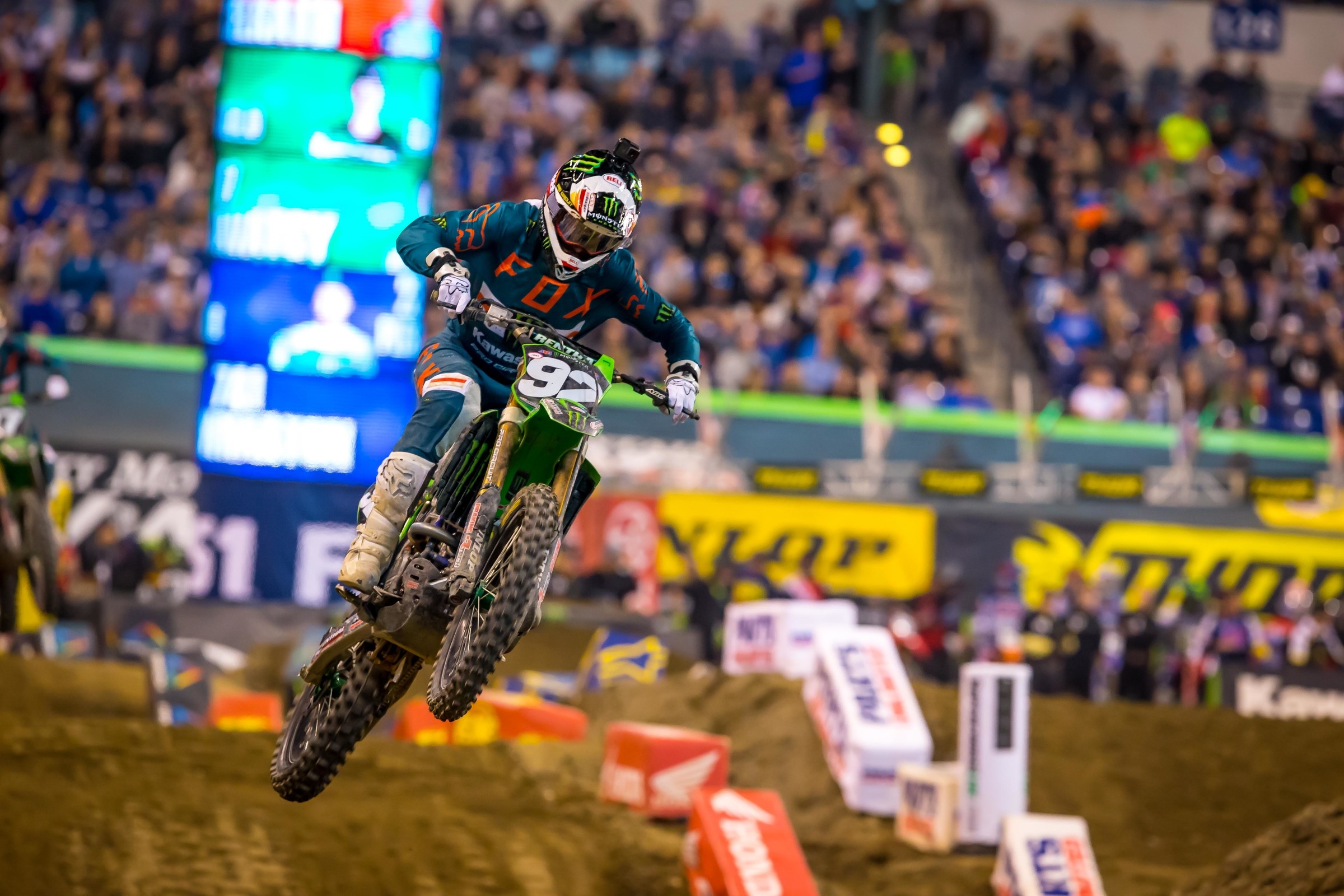 If one dove into the Racer X-produced Vault and sought out Adam Cianciarulo of Port Orange, Florida, it would be determined that over his five-year AMA Pro Racing career, he has lined up behind a starting gate 73 times. Sabotaged, haunted, thwarted (pick a word) by injury all along the way, it wasn’t until 2017 that the Monster Energy/Pro Circuit Kawasaki rider actually made it through both supercross and motocross in one piece. Now, after placing runner-up in the 2018 250SX West Region, and also now after having a troublesome knee overhauled, he’s aiming, again, for his first professional title in 2019. From his new “estate” in Murrieta, California, Racer X spoke with one of the most popular, well-liked racers in the sport.

Racer X: Okay, Adam, 2019 is upon us. How are you feeling about everything? Adam Cianciarulo: I feel great going into the new season. My program is the most organized it has ever been and I feel like it is the best fit for me. Body-wise, I feel great; my knee feels great. The bike is good. We’re kind of finalizing all of our testing now and we’re getting ready for Anaheim which is coming up pretty soon. For me, I’m in a perfect spot where I feel like I can make the best of it this year and I’m excited to leave my best out there.

Sounds like you have the West Region at the front of your mind. Your team owner, namely Mitch Payton, plays his cards close this time of year. Still too early to tell?
It’s still a little bit early. I don’t want to 100 precent confirm that I’m going to race West Coast, but that’s certainly what I would like to do. I’ve been pretty vocal about wanting to race West because I feel like I’m ready to get it going, but I’ll be ready regardless. Whenever Mitch does give me that 100 percent conformation, I’ll be ready.

Shortly after you won the 250 East/West Showdown in Las Vegas last May, you quietly talked about going right in to get surgery on your torn ACL. Did it go the way you wanted it to?
The knee was an unfortunate circumstance in that it happened in Indianapolis in 2017. I’ve told the story before and no need to dig too much into it, but it was holding me back a little bit, not so much on race day, race day was okay. We could manage that. As far as my training and my day-to-day riding and other things, it was kind of difficult to string days together just because my knee was banged up. My ACL and MCL were both torn and what happened was that my knee got so lose that it was moving around a lot in the socket and it causes those bones to bruise around the knee. The more training and the more riding that I was doing, the more the bone bruises got worse, the more fluid filled up and limited my range of motion. I was able to get through this season. Of course it wasn’t exactly what I wanted. I would have loved to have come out on top, but I did give it my best.

You closed fast and hard in the 250SX West Region class, going 2 (San Diego), 2 (Indianapolis), 3 (Seattle), 2 (Salt Lake City) and 1 at the Las Vegas Showdown round. We’re you good with the series and how you raced it?
Yeah, it was a little bit frustrating. Coming into this year, and even though I had the injury that was lingering, I was still solid and I felt confident in myself. For me, I had to take accountability for my starts, especially in the beginning of the year. Really, my starts weren’t that good all season and that put me in some positions where I just didn’t capitalize on. That’s completely on me. I think that was the first thing that I kind of went to work on. We were able to string some positive and some consistent results together. You know me Eric. I want to win and that’s the ultimate goal and that’s what my job is. It was frustrating there getting a bunch of seconds and a bunch of thirds. At the same time, we learned a lot and we’re taking that into this year. Hopefully it’s all a successful stepping stone towards a successful 2019.

Out of curiosity, as far as training, riding and testing goes, what have you been up to in your march to either Angel Stadium in Anaheim or U.S. Bank Stadium in Minneapolis?
I’ve actually spent a lot more time in California this year and I’ve done a lot of testing. I started riding some outdoors here in California in September. I then gradually got back into supercross and got a base setting with the team and then I went back to ride with Ken Roczen and Chase Sexton and Alex Martin over there at the Moto X Sandbox in Florida. I was there for the month of November and I’m in California now and I’m actually here until the start of outdoors. I’m excited be locked down here and it’s a good vibe.

You sound pretty committed to riding and training in California.
I think it was good for me just to get a little bit of a change of scenery and a change of pace. I needed to step out of my comfort zone and fix a few things. Out here, I’m obviously able to be around the team a lot more and able to test a little bit more. I’m just not a big fan of doing the same thing over and over again. I just felt like I needed a change. I actually just have a little one-bedroom apartment down in Murrieta and I’ve been grinding away and doing my work and I have to say I’m the happiest I’ve ever been down here. It’s just a simple life and I have great communication with the team and everybody and the feedback has been real positive as far as my riding and the testing and everything we‘ve been doing. I’m excited to see how this all translates to the racing.

Just keeping things simple and streamlined?
It’s a simple life, man! I don’t even have a table. I have one bar stool, I have a couch, I have a TV and a bed and that’s all I need. I’ve been really fortunate and I’ve been working with Nick Wey really closely these last couple years. He lives right by me down here so we’re able to do the training together and I’ve really enjoyed working with him. His family is like a second family to me too, so it’s nice to be around them. It’s a cool little area.

In just knowing you two guys, it seems to me like you and Nick Wey would work really well together.
Yeah, Nick is a great guy. He’s obviously has a lot of great knowledge. I think him and I think pretty similarly, so he’s able to read what I’m doing when I’m out on the bike. We communicate really with each other. He’s a super-good guy to be around and he’s kind of taken over the whole training aspect of my program too. He does my riding schedule and my gym schedule and cardio schedule and everything. He’s been great and so instrumental in all of the strides I’ve made these past couple years. I’m super, super grateful to have someone with that much knowledge in my corner. He’s a great friend too. He always brings the energy up. It’s solid to have him with me.

You’re about to start up your seventh season with Mitch Payton and the Monster Energy/Pro Circuit Kawasaki race team. How’s the vibe and general tone inside the race shop and at the test tracks?
The vibe in the team is great. Everything is solid. Just like always. We’re all competitors. We all want to win. Every day we are doing our best to reach those goals. I would say that last season is not what the team wanted and it wasn’t what the riders wanted either. We didn’t win a lot and that’s not the Pro Circuit standard. If you ride for Monster Energy/Pro Circuit Kawasaki, you need to be up there and winning races and contending for championships and winning championships. That’s been proven in the past by a lot of guys that who have come before. I think the vibe is that we need to get back on top and we need to put our best out there and not leave anything on the table. I think we’re all competitors and we’re sick of losing.

Simple question, but oh so complex, what’s Adam Cianciarulo's masterplan for racing in 2019?
The masterplan… I think in years past, I’ve always said, “I want to win, I want to do this, I want to dominate.” And ask anyone: that’s the goal. As somebody that has a high standard for themselves, I don’t see the point in doing this to the degree that I’m doing it and have the goal not be winning. I have everything I need to win. I think that if I give my best effort every time on the track as far as racing goes, I think I’ll exceed any expectations that I have for myself. It’s just about going out there and really just shutting the brain off and letting the training and everything that I have done speak for itself.

I like to think I’ve known you pretty well for a while now and one thing that sticks out in my mind when we speak is how much you actually love the sport. There is a lot to be said for that. To my way of seeing things, and through all the shit you’ve been through, I think the sport sort of owes you one. Thoughts?
Eric, I think that the sport has given me so much. Of course, I grew up a major fan of the sport and the sport has already given me so much, man. It’s a privilege to be able to be out there and to have a factory ride and to fly to these races every weekend and have mechanics working on the bike and making everything all pristine. It’s all stuff that you don’t really think about anymore, but it’s still something I’m grateful for. I’ve accomplished a decent amount in the sport, but I’m definitely not satisfied with what I’ve done so far and I think that I have a lot, lot, lot, lot left on the table. I don’t think that the sport owes me one, but I certainly think I’m capable of reaching all those goals that I set for myself.