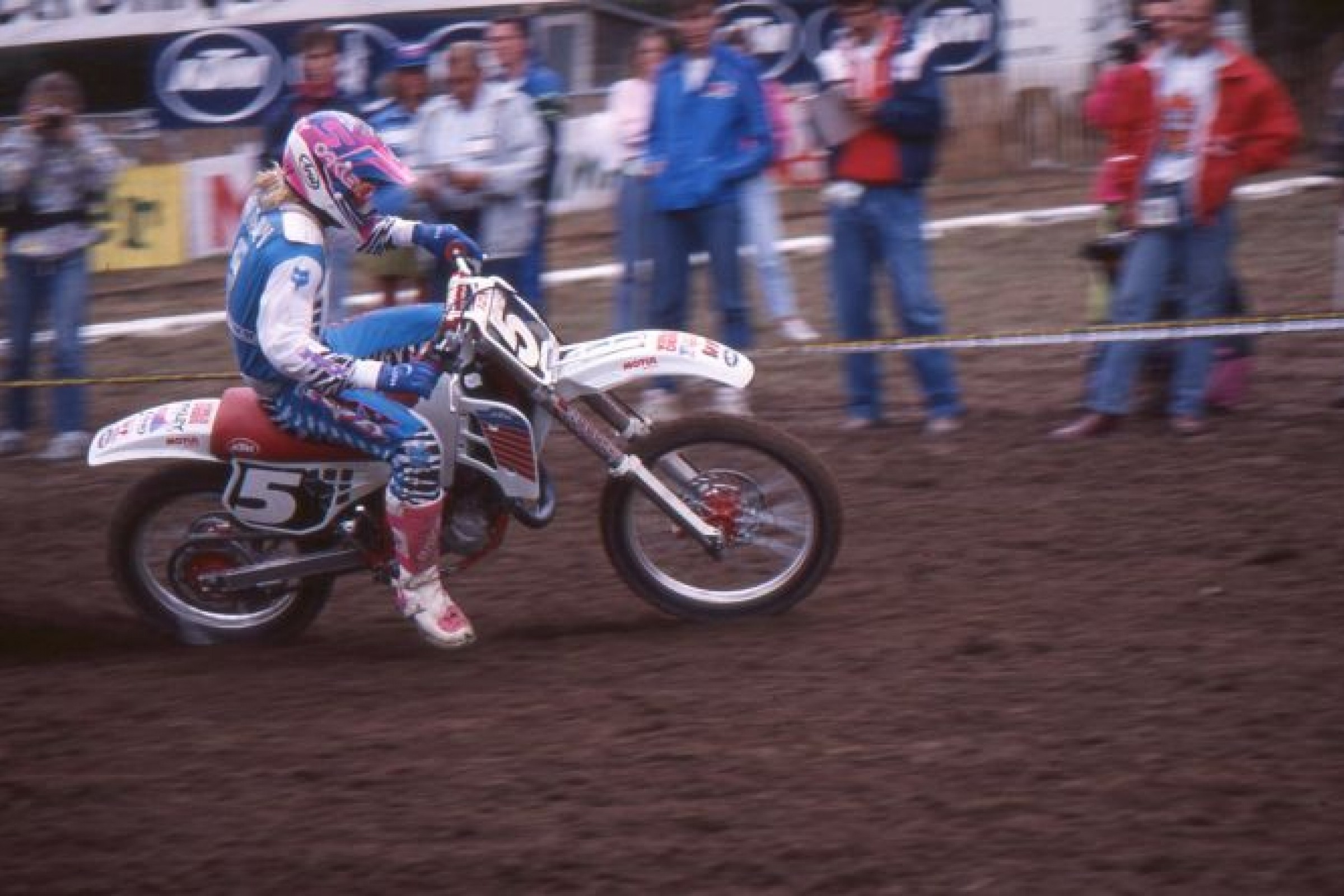 On This Day in Moto May 7

With series favorite Jean-Michel Bayle just getting back to the starting gate after breaking his arm a month earlier, the door was open for Michele Rinaldi, who finished 1-3 to get the overall win on his Suzuki. American rider Broc Glover, now on a KTM and in Europe for his last racing season as a professional, scored second overall with 8-2 finishes. Bayle ended up winning the second moto after a first moto DNF, salvaging fifth overall. He would later go on a hot streak and win eight of the next ten GPs to snatch the 1989 FIM 250cc World Championship.

The Southwick AMA 125/250 National was swept by Team Yamaha, which was having a dominant year. Broc Glover, the defending 125 National Champion, topped Kawasaki's Gaylon Mosier and Suzuki's Brian Myerscough in the 125 Class, and Bob "Hurricane" Hannah led his veteran teammate Pierre Karsmakers in the 250 Class. This was the last season for Karsmakers, a Dutchman who would move to America in 1973 and become that year's AMA 500cc National Champion, as well as the first AMA Supercross Champion one year later. This runner-up finish at Southwick, however, would mark his last podium as a professional racer.

Future FIM Motocross World Champion and U.S. motocross pioneer Rolf Tibblin was born in Sweden. He would become the 250cc European Champion in 1959 and then the FIM 500cc World Champion in both 1962 and '63. He also finished on the podium for the season several times. When his career ended, he became a training guru and ran the Husqvarna International Training Center in the 1970s in Carlsbad, California. He also teamed up with fellow Swede ex-patriot Gunnar Lindstrom to win the 1972 Baja 1000 in the motorcycle division.

Mark "Bomber" Barnett won the Kansas City Supercross over Honda's Johnny O'Mara and Kawasaki's Jeff Ward. At the time, all three were also battling together for the AMA 125 National Motocross Championship outdoors.

Here's a win ad with a headline that just wouldn't fly today....

And speaking of ads you couldn't run today, how about this Hannah one from the previous week's Pontiac SX?

The final round of the 2016 Monster Energy AMA Supercross Championship was thrown a wrench when the skies opened over the desert (yes, in Las Vegas) and a huge rain turned Sam Boyd Stadium into a swamp. There was no concern for Ryan Dungey, who wrapped up the title a week earlier. Still, he and Ken Roczen battled hard before Roczen crashed and Dungey went down with him. Dungey kept his bike running, though, and got away for the win. Jason Anderson and Eli Tomac rounded out the podium.

Cooper Webb (West Region) and Malcolm Stewart (East Region) had plenty of reasons to be nervous, though, as neither had locked up the title coming into the Shootout. Further, Webb was dealing with a broken scaphoid (navicular) in his wrist he sustained while testing. Then the main event started in the worst possible fashion when Webb crashed in the section of the track outside the stadium and landed right on his tender wrist. He was last, he was in pain, and he was in trouble. Worse yet for Webb, his title rival Joey Savatgy got the start and rolled away out front. Webb battled hard to get back to 11th and clinched the title by one point. It was Webb’s second straight title.

Malcolm’s night was easier, as he finished third to clinch his first title. Stewart’s title made him and his brother James the first sibling combination to ever claim supercross championships.