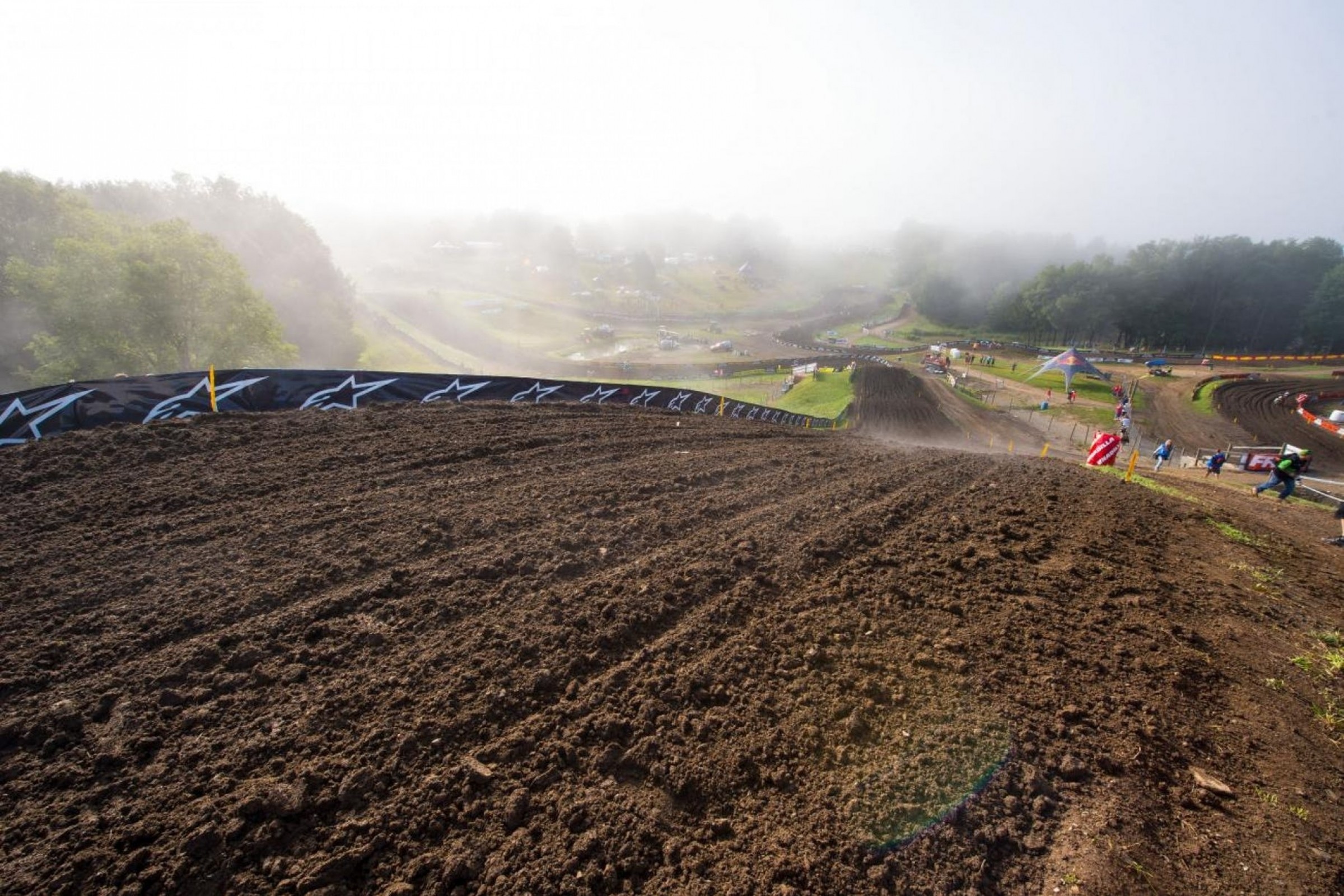 The first motocross race I ever knew about was Unadilla. I’m from New Jersey so the track was essentially “local” in motocross terms, plus it was one of the only races in the sport to get actual TV coverage, as once a year the popular MotoWorld highlight show would expand to a full hour, following that week’s racing news show with full coverage of the USGP motos from Unadilla. Those early 1980s shows fell right into my age wheelhouse. The 1985 United States Grand Prix from Unadilla was first time I ever saw a dirt bike race on TV. Been hooked ever since.

I can still recite, by memory, every word uttered by announcer Larry Maiers on that show, and in fact I subtly borrowed many elements of his style into my own announcing. I grew up listening to Larry, so to me, that’s how motocross is supposed to sound. Also, shout out to the pit reporter from that 1985 show—MX Sports’ own Tim Cotter! The next year Tim was replaced by Gary Bailey. Oh Tim, you coulda been a star!

Anyway, the story of that 1985 event was something called the Unadilla Jinx, and how it impacted Bob “Hurricane” Hannah. Hannah had been railing around Unadilla for almost 10 years, both in Trans-AMA races and USGPs, and was always super-duper fast and incredibly popular at that circuit. And yet, it was one of the few tracks in which he didn’t have a win. According to that 1985 MotoWorld broadcast, something always went wrong for Hannah—broken bikes, crashes, whatever. I would find out later that his 1978 battle with Roger DeCoster at a Trans-AMA was one of the most legendary of all-time—DeCoster, now on the downside of his peak days, managing to beat back the young, cocky Hannah, who was in his absolute prime, on American soil. Hannah ended the day with a dented pipe, courtesy of DeCoster’s front wheel. This is the definition of “when men where men.”

By 1985 Hannah was now where DeCoster was, the old guy trying to fend off the kids one last time. As Hannah got older, he would often say he needed rougher and rougher tracks to stay competitive with the young guys. Unadilla was one of those tracks—possibly the roughest of all in those days. Further, Hannah was nearing the end of his three-year deal with Team Honda, which meant the 1985 event would probably be his last chance on awesome equipment.

So that was the build up for that 1985 race, and the first moto featured one of the best battles I’ve ever seen—yes, the first race I ever watched has stood the test of time. Ricky Johnson led, Johnny O’Mara battled him, then Hannah and Keith Bowen (who had apparently been building a ramming/take out rivalry all season, according to Maiers) caught them. It was a four-man duel for the lead, and then, in one of craziest moments in motocross TV history, Hannah pulled off this ridiculous pass. O’Mara comes out of a corner all by himself, in the lead, and no one else is close. But then, by the end of the straightaway, Hannah just blitzes into the screen, going like 20 MPH faster, feet off the pegs and totally out of control! He must have gained two seconds on O’Mara in one straightaway!

[Side note: I once asked David Bailey what is was like to go play riding with Bob Hannah. He said: “It was like riding with James Stewart.”]

Hannah somehow stuck to the inside in the next corner, he and O’Mara smashed into each other, and O’Mara’s leg got crunched. Honda teammates! O’Show waved Bob past and Hannah went on to take—and I can hear Maiers saying it now—“an incredible come-from-behind win that rocked the fans here at Unadilla.”

Ah, but the Unadilla jinx. In moto two Hannah crashed and broke his clutch lever. He would charge through the pack without the use of the clutch, but his 1-5 scores weren’t going to do it against O’Mara, who checked out in moto two to go 2-1. Oh what heartbreak!

[It’s a great tragedy of the sports world that the tapes of the first Super Bowl are sitting in some guy’s attic, there are no tapes of Wilt Chamberlain’s 100 point game, and for some reason no one has posted that MotoWorld 1985 Unadilla USGP on YouTube. I might have to bust out the VHS tape—that I still have—and pray to God that it doesn’t break while recording it. In the meantime, here’s some home video footage. Note how nuts the fans are!]

The next year, the jinx would reverse and O’Mara would lose in heartbreaking fashion. Hannah would finally get his … we’ll cover that another day. It was then that I started to notice the pattern. Unadilla has had many changes through the years—once one of everyone’s favorite tracks, to eventually one of the least favorite, and now recovering to get back somewhere in the middle—but no matter what, the craziest stuff happens here.

We chronicled one of them in our Fight Club longform story on the 2001 125 AMA National Motocross Championship. In 2001 at Unadilla, Travis Pastrana had it. Not just the overall with a 1-1, but “it.” I distinctly remember standing at the side of the track thinking “Finally this guy has figured it out. Lots of ups and downs but now he’s going 1-1, he’s got a giant points lead, he’s going to try to make this 125 title boring like Carmichael did and then go battle him on 250s next year.”

Travis was set to leave Unadilla with a 50-point lead. We were already thinking about his prospects the next year in the 250s. Until the very last lap, when he crashed. Travis the racer was never the same, and never won another race.

Unadilla, man, there are ghosts.

In 2007, Carmichael and James Stewart were winning everything. Chad Reed got the occasional supercross win, but RC and Stew had hogged up seemingly 99 percent of the AMA Motocross overalls over the past few years. It was just a bench-racer’s dream to imagine what would happen if, just for one day, neither of them raced. Who would win then? Wouldn’t the battle be just incredible?

Well, it happened at Unadilla. Carmichael began his retirement, and skipped the weekend. Stewart then crashed out in practice. The door was open! After practice, I grabbed cameraman Wes Williams, and we went to the hills and just started asking fans who they thought would win the 450 Class. We got seven different answers! It was wild and Kevin Windham ended up winning it. You know K-Dub wins are always popular wins.

Windham was always good at Unadilla. By 2003, Carmichael had won something like 700 250 overalls in a row, an undefeated streak reaching such proportions that most people couldn’t even remember when it started. Windham, the first man to really harness a 450 and make it look fast and smooth, was threatening RC all year. Unadilla would finally be the day, as he held up under furious pressure with RC attempting everything short of nuclear war to try to catch him for the overall. It got so nuts that the fans were pushing on the fences, and one was cheering K-Dub so hard he ended up falling over the fence and onto the side of the track. Kevin says the dude just got up and kept cheering!

When Windham finally won at Unadilla, breaking Carmichael’s streak, everyone could sense how historic it was. The longest win streak in the history of the sport was over, and not just Carmichael’s—it was clear that day that four-strokes were coming as soon as a Factory Connection Honda guy whispered to me: “Yeah, Kevin’s bike has at least five more horsepower….” and RC’s wrench Mike Gosselaar said he was worried Ricky was going to break the throttle of his CR250 from twisting it so hard. Wowzers.

You know that race when Stewart pulled over and let Reed pass him, and then sped back up to show him he could win straight up. Of course that happened at Unadilla.

In 1996, 250 dominators Jeff Emig and Jeremy McGrath each crashed in a moto, allowing Greg Albertyn to finally get his first win in the U.S. Back in 1989, Ricky Johnson, coming off of his eventually-career-ending wrist injury, still managed to win the USGP at Unadilla. A year later, RJ would win the 500 National there, in what would turn out to be the last National he ever competed in. Yeah, he won.

Unadilla giveth, but it also taketh away. That’s the lore and the legacy, and I hope that won’t ever change.