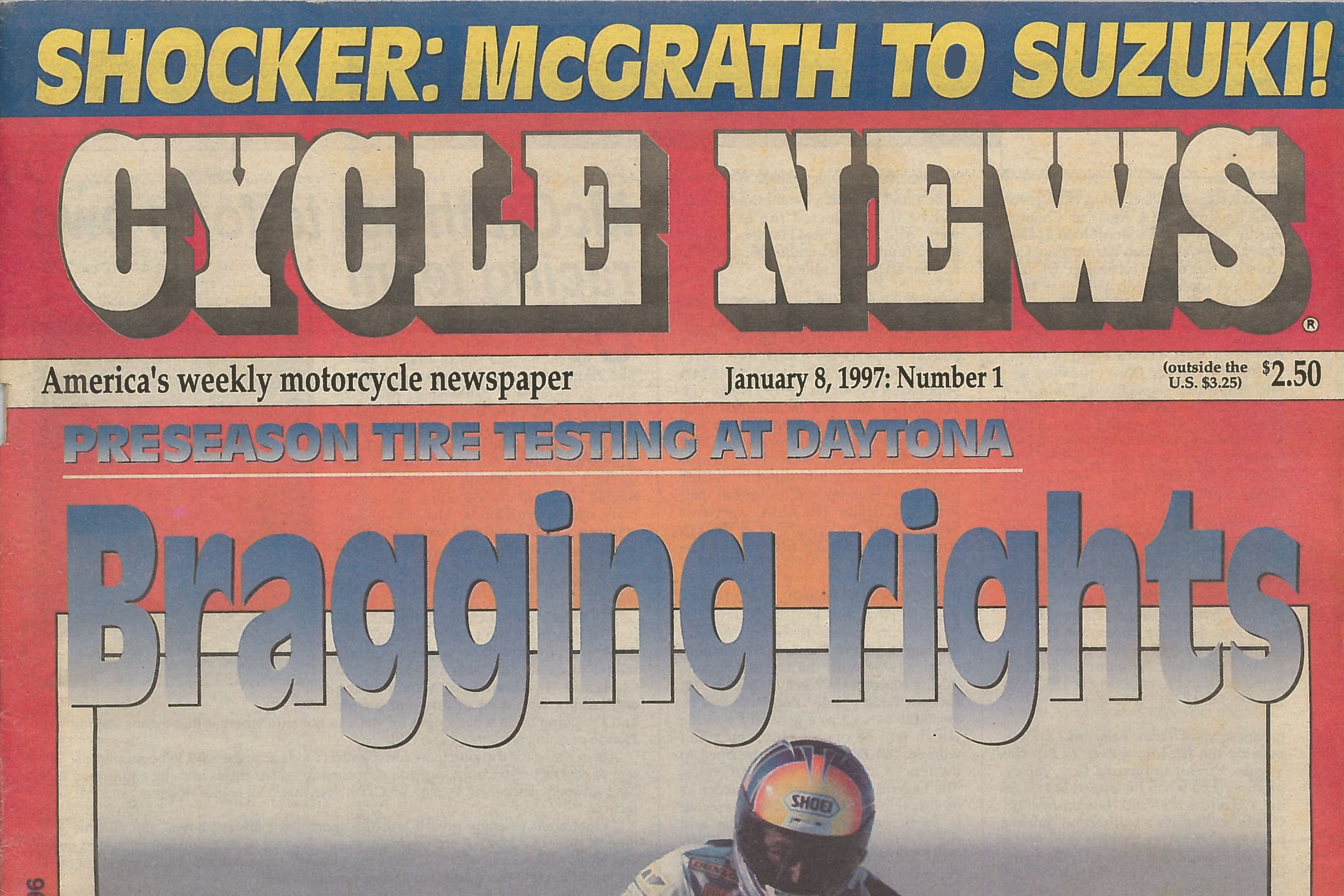 On This Day in Moto December 27

In one of the all-time off-season shockers, Jeremy McGrath, then the reigning four-time AMA Supercross Champion, announced via fax that he was leaving Team Honda and starting his own Suzuki team—tentatively titled Nac Nac Enterprises—with help from Phil Alderton of Honda/Yamaha/Suzuki of Troy, 1-800-COLLECT, and American Suzuki. The move had been rumored for some time as McGrath, despite being absolutely dominant on Hondas for six years, first on Mitch Payton's PEAK/Pro Circuit 125 team and then from '93 on as a full-factory rider, was said to be very unhappy with not only the '97 race bike but also the constraints the Honda corporate contract put on him as he was building his own brand. Jeremy was at the top of his game too, having won 14 out of 15 rounds in the '96 season, including the first 13 races in a row. The news was such a shock to the industry that Cycle News, the weekly bible of the American motorcycle industry, put a headline about it above the masthead.

"I just want to enjoy myself and the sport like I always have," said McGrath inside. "I want to maintain my focus and desire and work with people who will allow me to be my same old self. That's what got me to the top in the first place and that's what's going to keep me there."

McGrath leaving Honda was one thing—the brand had won the last nine AMA Supercross Championships in a row to that point. But signing with Suzuki made it all the more surreal, as the yellow brand had not won an AMA Supercross title since 1981, back when Mark Barnett got Suzuki its only SX crown to that point.

"This is a surprise to us," said Ray Blank, then-Honda VP of Operations. "We've had a great relationship." According to Cycle News, matters of contract restrictions, outside sponsorship, video rights, and the equipment itself all factored in McGrath's decision to leave Honda and start his own team.

All these years later, we now know 1997 as the only real hiccup of McGrath's reign, which lasted from 1993 until Ricky Carmichael took the supercross title in 2001. During that time McGrath would win 72 AMA Supercross main events and seven titles in eight years, both records that may never be broken—Carmichael, James Stewart, Ryan Villopoto, Ryan Dungey, Chad Reed, and everyone else never got close. But McGrath would win just two rounds in '97 on his Suzuki RM250 and lose his AMA Supercross title to Kawasaki's Jeff Emig. He would move over to Yamaha with help from Chaparral Racing in 1998 and get right back on top.

As for Suzuki, they would have to wait until 2005 to finally get a second AMA Supercross crown, and that came only after another superstar rider, Ricky Carmichael, left Honda after his three SX titles. Honda, by the way, hasn't won the crown back yet.

And one other thing: Check out the next week's Cycle News cover with the full story after the deal was signed on January 1, 1997, and embargo on MC with a Suzuki pics were lifted. The cover has a story on what would turn out to be an even bigger development in the global motorcycle industry. It was "First Look: Yamaha's four-stroke YZM400F... Ready for the Nationals?"

We released episode 4 of the 2018 Racer X SX Preview Show. In it, we discussed the Triple Crown (three main events) format, revised points structure, the elimination of semi races, and the additional East/West 250SX race.

On December 13, 2017, Christophe Pourcel announced his decision to retire from professional racing due to a neck injury. The two-time 250SX Eastern Regional Champion and 2006 MX2 World Champion will be remembered for his talent, technique, and speed, but big injuries prevented many from seeing his true potential.

On December 27, 2017, Jason Weigandt spoke with Pourcel about his decision and more.

“After the second neck injury at Washougal [2016] when I was back on top of my game and fighting with Eli [Tomac] and all those guys—then I crashed again and broke my neck again. I kind of knew after that I didn’t want to take that much risk. It was probably going to be my last year, either supercross or whatever I did in Canada. I tried my best for the neck to get better, but I need time. I even need more time now that I’m on vacation, so I think it was the right time for me.”

You can read the entire interview here.

On this day at Ascot Park in Gardena, California, Gary Bailey and his brother Bob taught a motocross school with fellow future AMA Pro Motocross National winner Tim Hart assisting him. Cycle News, which had a reporter attend the school, gave the man who would come to be called "The Professor of Motocross" two thumbs up, calling him a talented rider and articulate speaker who could then get on the motorcycle and practice exactly what he was preaching. In the years since, the AMA Motorcycle Hall of Famer has probably taught more young riders how to become better motocross racers than anyone in the history of the sport. Among his most talented pupils? His son David Bailey, who became a Honda factory rider, AMA Supercross Champion, multi-time AMA Pro Motocross Champion, and one of the sport's all-time greats. He's also considered one of the most stylish riders of all time.