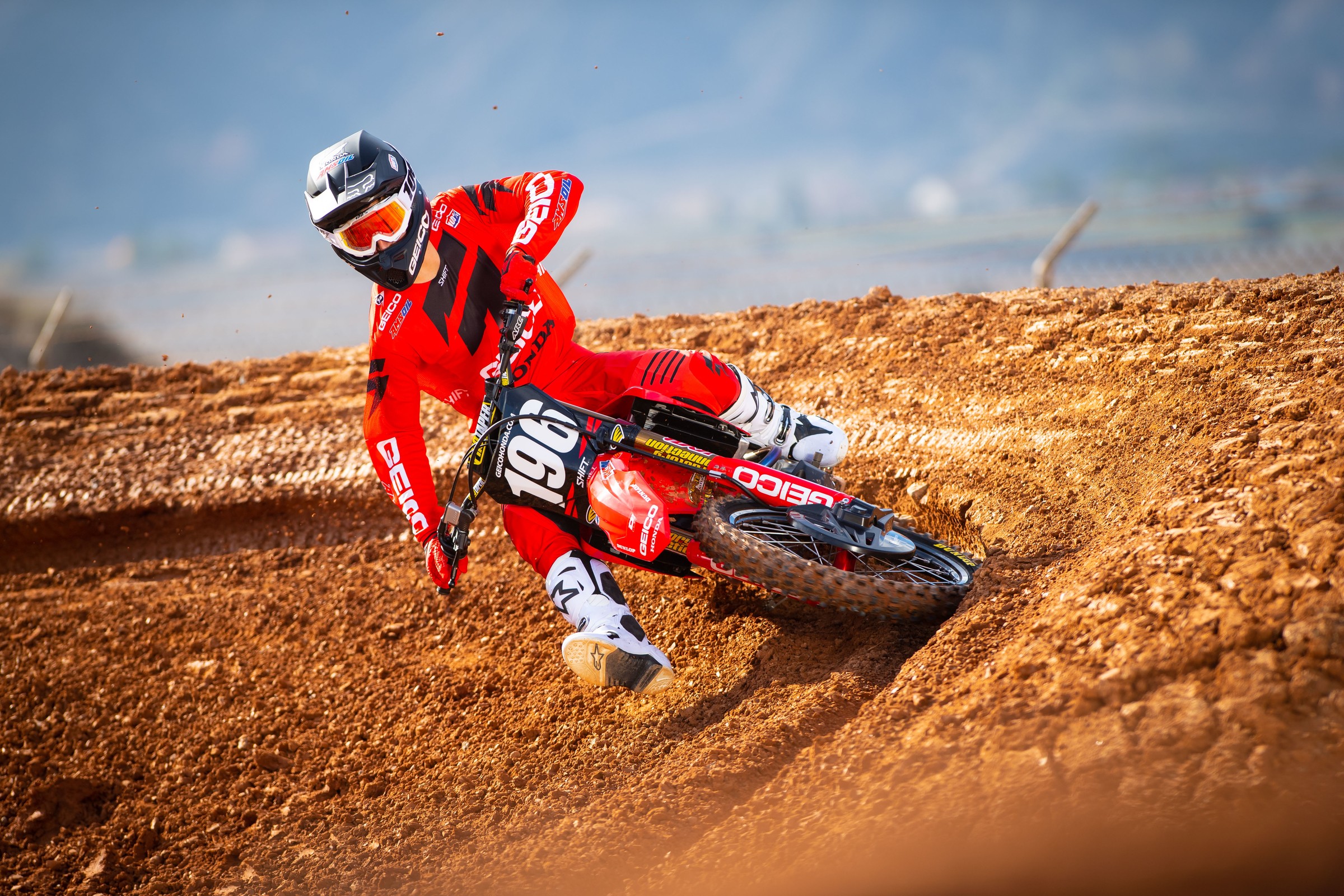 There’s a new import onto the American racing scene. Following in the footsteps of Jeff Leisk, Michael Byrne, Chad Reed, Brett Metcalfe, and a few others, Australia is sending its next big thing to the USA pro motocross scene. Like so many others, Hunter Lawrence had to first stop over in Europe for a few years. He won some races and showed USA fans he was for real at the last two Motocross of Nations, when he took the MX2 win last year at Matterley Basin and this year was in the mix for the overall.

Lawrence is all signed up at GEICO Honda (his brother Jett is also with the GEICO amateur program) and ready to conquer America. Like so many others who come here, though, he’s not adept at supercross just yet. There will be a learning curve for the kid.

“We tried to be as smart about it as we could,” Lawrence told us on the PulpMX Show about his decision to head to Europe. “All of the Aussies that went via Europe onwards to America had a better success rate opposed to the guys that went direct from Australia to America. So we were like, there’s obviously something that has to be learned here in Europe. But at that time, if we had an opportunity to go to America or Europe, we probably would have taken it. It was just at that point; that was what we were looking for.”

The 2018 MX2 season didn’t go the way Lawrence or anyone really thought it would. Booted off Suzuki’s GP effort when they folded up, Lawrence was with a brand-new team, on a brand-new CRF250R, and there were struggles all around at times. After the GEICO guys helped out with settings, though, Lawrence’s results did improve a bit. Through it all, Lawrence said there are no regrets about this past year.

“I’d done everything I could,” he said. “I worked my ass off. We had three injuries throughout the season, so you can look at it a lot of ways. You see some guys that have one injury during the season and they just don’t get back up to where they were before during the season. We had three injuries and we were still able to come back and be battling for … towards the end we were battling for wins and we were up racing the top guys.

“So as far as that, my riding, results don’t really reflect on how I was riding. It was a very frustrating year, to say the least. I had goals and plans or dreams of becoming a world champion. It just wasn’t meant to be. I’ve accepted that. We’ve got new things, new challenges and goals to achieve. So cop it on the chin and take it in your stride and move on. I did everything I could. I don’t look back on it and think, Gee, if I had done two more days of 40-minute motos in the winter.… We didn’t leave anything on the table.”

Living in Europe with your family and chasing the dream can be hard for anyone not from there. I think about the stories that Grant, Andrew, and Gerald Langston or Greg Albertyn and Ian Harrison have told me over the years. Trying to navigate the customs of different countries and at the same find a program that allows an athlete to excel isn’t easy.

“There was days I was crying there,” Lawrence said. “I’m not going to sit here and say there wasn’t. The amount of stuff we went through … you’d be a robot if you didn’t cry. There’s been a whole lot of dark days. More than a handful, that’s for sure.”

But it’s years doing this that build character and resilience. Lawrence and his family will be rewarded for all the struggles.

Like so many others who come here though, he’s not adept at supercross just yet. There will be a learning curve for the kid. He’s racing 250SX East, so he’s got some time to be ready. I was curious as to the frustration level he’s feeling trying to jump into supercross and perhaps lagging a bit behind riders on the team that have a lot more experience. Speaking from experience, elite riders like Lawrence don’t like getting beat at anything, anywhere. As someone who was at the Yamaha track with an Aussie running #103 in late 2001, I can attest to that. So are you frustrated, Hunter?

“No, not really, because let’s face it, [the teammates] should be pulling time on me,” he answered. “I’ve only got a couple weeks on supercross, and they’ve been racing it there their whole lives. Theoretically, they should be pulling me and gapping me out and stuff. So that’s only normal. It would be stupid for me to come here and think that in the first couple weeks in four years that I’ve ridden a supercross that I’m going to be setting lap records and stuff.”

So that’s a good answer, right? Lawrence seems to realize that he needs to learn this indoor stuff and he’ll be fine when the sun shines. There’s no doubt about that. Of course, Hunter tells us it’s the whoops that he needs to work on–and that’ll come at some point. For now, though, the personable Lawrence seems to know that his time will come. It’s just not right now.

“I didn’t go on this whole life journey from Australia to Europe and then from Europe to here to just fill out numbers on the gate,” he said. “I want to win. That’s the goal.”

For another look at Lawrence's unique path to the U.S. listen to this.