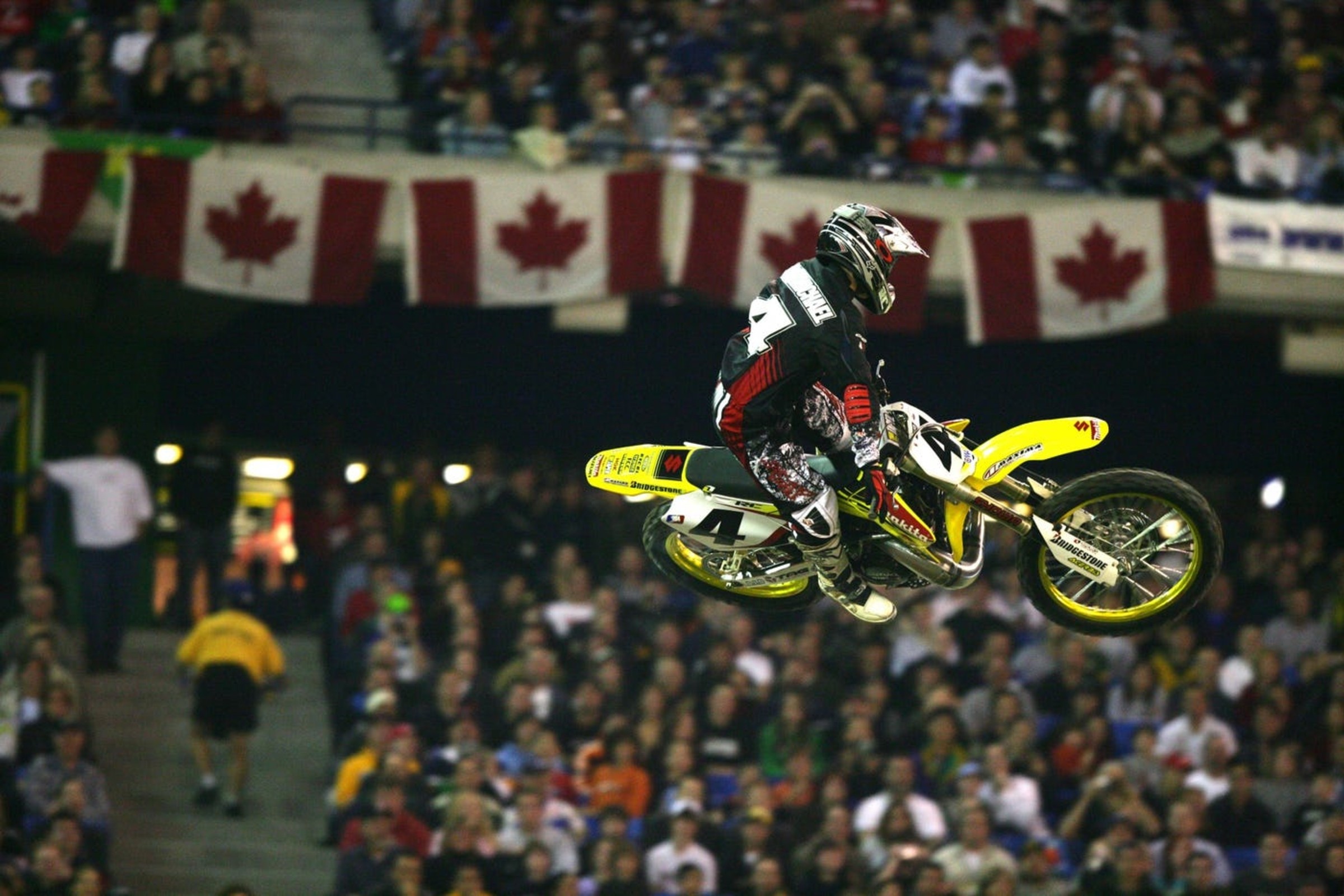 On This Day in Moto December 11

Despite the AMA/Clear Channel split of a few years earlier being over, the leftover effect were the two international races that the supercross promoter had committed to doing after co-sanctioning with the FIM. They tried to make it work in December for a couple of years in Europe, with moderate success. The first year saw many stars go over to Switzerland and Holland, including all of Team Yamaha and Red Bull KTM. The second year not nearly as many went to Spain and Holland, as the time of the year and the cost of sending the series overseas was taxing on both the riders and the teams. So for 2004 it was decided that the series would go up to Canada instead, hoping that the riders and race teams would more readily commit.

At first, they did not, but then Clear Channel got a game-changing gift in 2004 when Ricky Carmichael, the three-time AMA Supercross Champion, switched from Team Honda to Team Suzuki. He had missed all of the '04 AMA Supercross tour due to a knee injury, then came back and went undefeated outdoors. He then switched to Suzuki and decided for the first time to do the two FIM/THQ World Supercross races in December as a way to prepare for the AMA Supercross tour, which would start in January with the "perfect storm" at Anaheim.

The first round took place on December 4 at the Rogers Centre in Toronto and Carmichael won aboard his Makita Suzuki RM250, with the veteran Mike LaRocco second and Yamaha's Tim Ferry third. The defending AMA Supercross Champion, Chad Reed, and the incoming 125cc rider James Stewart both passed on the opener, as well as the next one, which would happen on December 11 at Vancouver's B.C. Place. RC once again won easily, this time over privateer Honda riders Nick Wey and Damon Huffman.

“Two races and two wins,” said Carmichael after the event. “It was good, I feel great. I made a few mistakes but I held on and got through it. At this stage, you’ve got to take some chances as we prepare for Anaheim. I know how to ride on the edge and right now, that’s what it’s all about.”

By simply going, Carmichael helped Clear Channel justify the event, which many of the other teams still did not want to do. But when he went out and took off with the '05 AMA Supercross title, it convinced both Stewart and Reed that they should probably go to Canada too and be as ready as Ricky for 2006. It was the first step in finally bringing the two series together to count for the same points, just as it does now, though there are no international events on the 2019 schedule for Monster Energy AMA Supercross, an FIM World Championship.

Carmichael wasn't the only one title contender to use Canada in December 2004 as a step toward 2005, as Red Bull KTM's Nathan Ramsey, the former 125cc West Region Champion, took his new KTM 250 SX-F north of the border and dominated both Toronto and Vancouver in races that do not count in the AMA record books, as at the time they were only FIM-sanctioned and not a part of any series. Ramsey topped Jeff Northrup and Brad Hagseth for the Vancouver win.