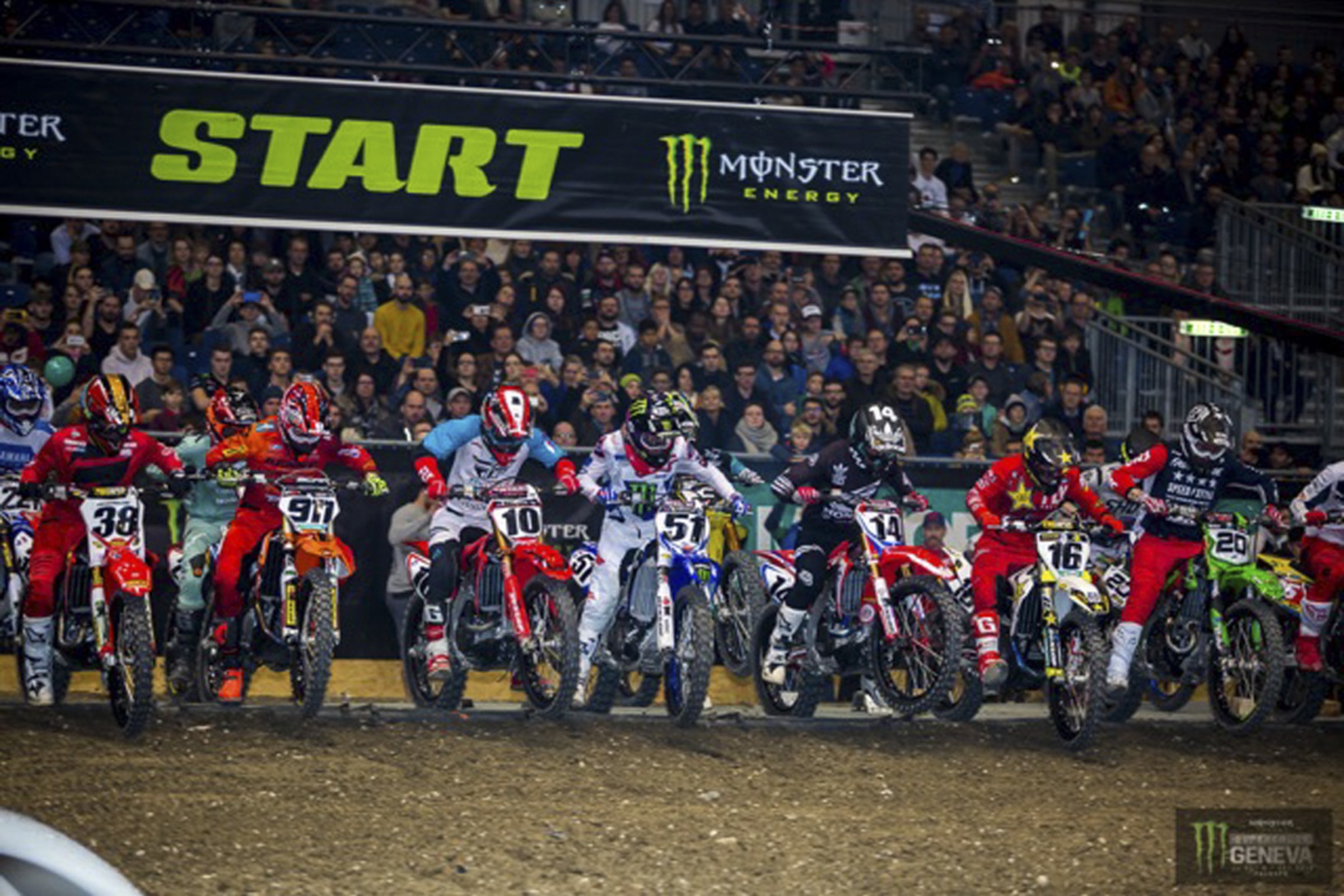 Night one of the Geneva Supercross proved to be wild, unpredictable, and full of surprises and it all started before the race. The field was deep with Rockstar Energy Husqvarna’s Zach Osborne, Monster Energy Yamaha’s Justin Barcia, Honda HRC’s Cole Seely, GEICO Honda’s Christian Craig, and the trio of Smartop/BullFrog Spas/MotoConcepts Honda riders in Justin Brayton, Malcolm Stewart, and Vince Friese. In the SX2 class it was ClubMX’s Cameron McAdoo making his debut on the Yamaha.

The Geneva race is always a good one, the arena is a good size, the dirt is always good, and the fans pack the place in.

When we say the excitement started before the race we meant that Stewart’s suspension didn’t show up until after practice. So Malcolm went out there for the heat and had another bike malfunction after a lap that prevented him from getting in any real laps before his LCQ where he started on the outside. Luckily, his skill showed through and he took the win which got him into the main event, although on the back row. Stewart’s night was a wild and crazy one.

Before we fully get to the main events it ought to be said that Osborne, a rookie 450SX rider this year, looks fantastic. In a deep field he had the best practice time, won his heat (even with a small bike issue and a heart rate strap issue), and really looked dialed in. About the only bummer for Osborne going into the main was losing the head to head race to Barcia in the final 2-0.

In the main event chaos reigned down the start straight as KTM rider Jordi Tixier and Brayton locked bars and forced Barcia and others to back off and give the start to Craig, Frenchman Cedric Soubeyras, Friese, and Osborne. For Seely, Barcia, Stewart, and a few others, it was game over ten feet out of the gate. Out front it was Craig who led the opening laps. Osborne duked it out with Friese for the runner-up spot and then gave chase to Craig. Osborne used superior outside corner speed to get by Craig and that was it, the #16 was checked out.

Behind him Brayton, a four-time King of Geneva, was making up some time on Craig in the rhythm where some riders were going 3-3 and then four onto the top of a tabletop and then off. In fact, Justin had to stop jumping it as he was creeping up to the back of Craig’s bike too much. Brayton eventually snuck around Craig and spread out a little bit. The top three were all maintaining their gaps for pretty much the whole race although at one point Osborne rolled the finish line for a downed rider that cost him some time.

Meanwhile, in back it was Seely, Barcia, and Stewart trying to fight up and the best one of the bunch was Malcolm who got around Friese briefly for fifth and was all over Tixier in fourth. The three riders were neck and neck racing down after the finish when Tixier got into Stewart and knocked him down which also allowed Friese to secure fourth; later on he and Barcia got into it and that left the 51 on the ground. Malcolm might have even gotten onto the box without the fall, he was riding pretty well but the crash did him in.

On the last lap, with the race well in hand, Osborne came up quickly on lapper Fabien Izoird and went down! Just like that, a race he had in hand turned to disaster as Brayton raced by, went around three turns and took the win. Brayton knew he was a bit fortunate for this one but also rode well to secure the win with Craig second and Osborne third. It was a stunning turn of events as the veteran #10 took advantage of what Osborne termed “a rookie mistake.”

In the SX2 class, it was McAdoo who came from a terrible start to second and 5.5 seconds down on the leader with about four minutes to go. The American hammered down and worked his way up the Frenchman Adrien Escoffier and took the lead. It was going to be a great win for the Yamaha rider but like Osborne, McAdoo went down on the last lap (mere feet from where Osborne would topple over) and was lucky to salvage a second.

So, yeah, other than the two leaders crashing on the last lap and giving the race away, and other than a rider that almost got on the box with five laps under his belt, not much happened here at Geneva. Wow, nutty night. Stay tuned for night two tomorrow!