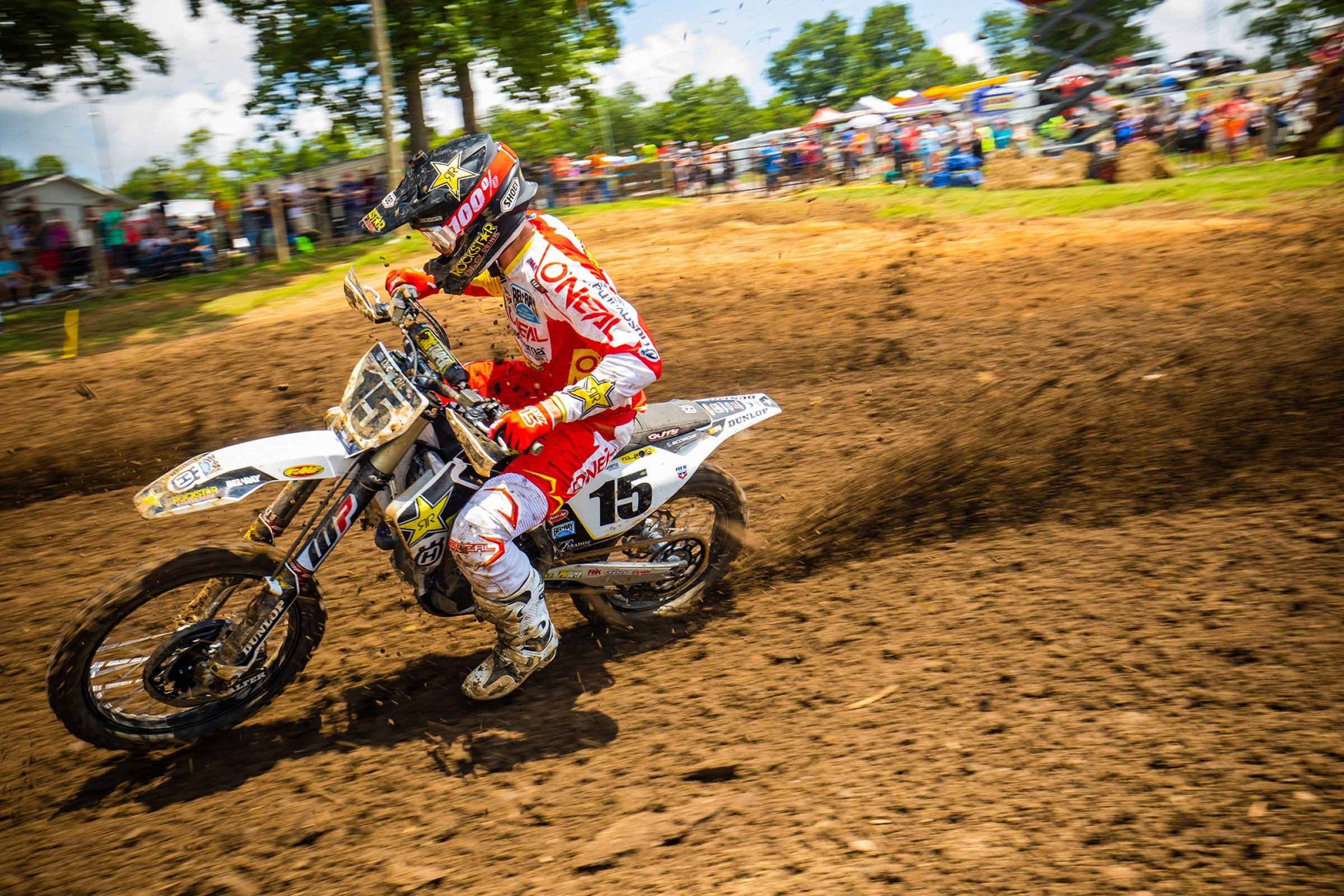 You know which team is killing it with podium appearances? Rockstar Energy Husqvarna Factory Racing. Aside from the opener at Hangtown, where a blinded Jason Anderson ran into teammate Dean Wilson after taking a rock to the face, the team’s been on the box at every single round, with Wilson and Martin Davalos stepping up at the latest three rounds to fill the void left by an injured Anderson. Oh, and with eight overall podiums, Zach Osborne is getting it done in the 250 Class too. With a track record like that you’ve got to think there will be more Husqvarnas on the podium at Unadilla. –Aaron Hansel

So You’re Saying There’s a Chance

We wouldn’t recommend laying down a large bet on it, but there’s an outside chance Zach Osborne could wrap up the Lucas Oil Pro Motocross 250 National Championship this weekend. Here’s how. When the checkers fly at Unadilla, anyone not within 100 points of Osborne will be mathematically eliminated from the chase. That means he needs to put an additional five points between himself and Joey Savatgy (or four points and take the win), 19 points on Alex Martin, and 26 points on Jeremy Martin. It’d be a tall order to fill, but it’s certainly not impossible. –Hansel

Adam Cianciarulo experienced heartbreak of epic proportions at Washougal. Late in the second moto the Monster Energy/Pro Circuit Kawasaki rider was in position to take the first overall win of his career—all he had to do was hold off a hard-charging Dylan Ferrandis on the final lap. Well, that didn’t happen and instead of popping victory champagne, Cianciarulo found himself on the wrong end of a three-way tie for second place overall, which pushed him all the way back to fourth. Afterward Cianciarulo admitted he didn’t read the pit board when his mechanic was trying to tell him he was in position for the overall, and had he known he was, he’d have ghosted his bike into Ferrandis to hang onto the spot. Cianciarulo is going to win an overall sooner or later, whether or not he has to take someone out to do it. Could it happen at Unadilla? –Hansel

Things haven’t been great at the last two rounds for Benny Bloss, who made his return to racing at Millville following a lengthy layoff due to an injury suffered at the Minneapolis Supercross. He was 17th at Millville and after going down on the start of the first moto at Washougal, finished 14th overall. To be fair, nobody expected him to go out and kill it at his first few races back, either. But now that he’s got a couple races down and had an extra week to rest, we’ll see if he can ride a little closer to his potential in New York. We know he’s fast, and we know he flies at Unadilla—he was fourth there in the 450 Class last year. We’ll see what kind of result he pulls in at his third National of the season. -Hansel

In case you haven’t noticed, there’s been a gang of privateers knocking on the door of the top 10 in the 450 Class lately, and things were no different at the last race at Washougal. Justin Hoeft jumped on the 51Fifty Energy Drink Yamaha to take 11th overall in just his second ever career National, Henry Miller was an extremely solid 12th, and Fredrik Noren was 13th. Had Noren not had problems and finished 20th in the first moto (he was seventh in the second) he probably would have been much better. Will any of the privateers jump into the top 10 at Unadilla? –Hansel

Following a one-race absence, factory Yamaha’s Cooper Webb will return to racing this weekend. Webb injured his meniscus at Millville and missed the proceeding round at Washougal. “My knee is getting a lot better, so I decided to race Unadilla this weekend,” said Webb in a team statement. “I have a lot of friends and fans in the Northeast, and I’m looking forward to seeing everybody. Last year was a double-moto sweep for me at Unadilla, so I’m excited to get back there and try to do it again!” We’ll see if Webb can return to form on Saturday. –Chase Stallo

Filthy Phil Is Back

AutoTrader.com/JGR Suzuki’s Phil Nicoletti will return to action this weekend, making his 2017 Lucas Oil Pro Motocross debut at his home race. Nicoletti has been out since February after dislocating his ankle, shattering his heel, and fracturing his lower fibula during press day at Arlington. It may be easy to forget, but Nicoletti finished fifth in 450MX points last year, which included a top 10 finish at Unadilla. It’s been a long road back for the New Yorker, but we’ll see where he stands tomorrow. -Stallo

We’ve covered the upcoming pro debut of New York’s Justin Cooper pretty extensively. The Nicky Hayden AMA Horizon Award winner won’t be the only rider to make his Lucas Oil Pro Motocross Championship debut this weekend. Jayce Pennington will make his debut with the Traders Racing Yamaha team. The Illinois native went finished 12th and 15th (with two DNFs in the final motos) in Open Pro Sport and 250 A at Loretta’s. Also making their pro debut is former Kawasaki Team Green rider Joey Crown, who finished second and third in Open Pro Sport and 250 A at Loretta’s. All three will be sporting new numbers for the weekend:

As we documented earlier this week, only one former Horizon Award winner has cracked the top 10 in their Lucas Oil Pro Motocross debut. So, don’t put too much stock in their results this weekend. –Stallo

After a brief two-race stint in the FIM Motocross World Championship in MX2 with Honda HRC, former Yamalube/Star Racing Yamaha rider Anthony Rodriguez will make his 2017 Lucas Oil Pro Motocross debut in the 450 Class at Unadilla. In his only year with Traders Racing Kawasaki last year, Rodriguez had one of his best performances of the season at Unadilla, finishing 12th overall in the 450 Class. –Stallo

As we pointed out yesterday, there are still a lot of riders seeking out new deals for the 2018 season. Like it or not, these next three races are crucial for a number of riders hoping to secure a factory deal. Who will step up and make an impression starting this weekend? –Stallo