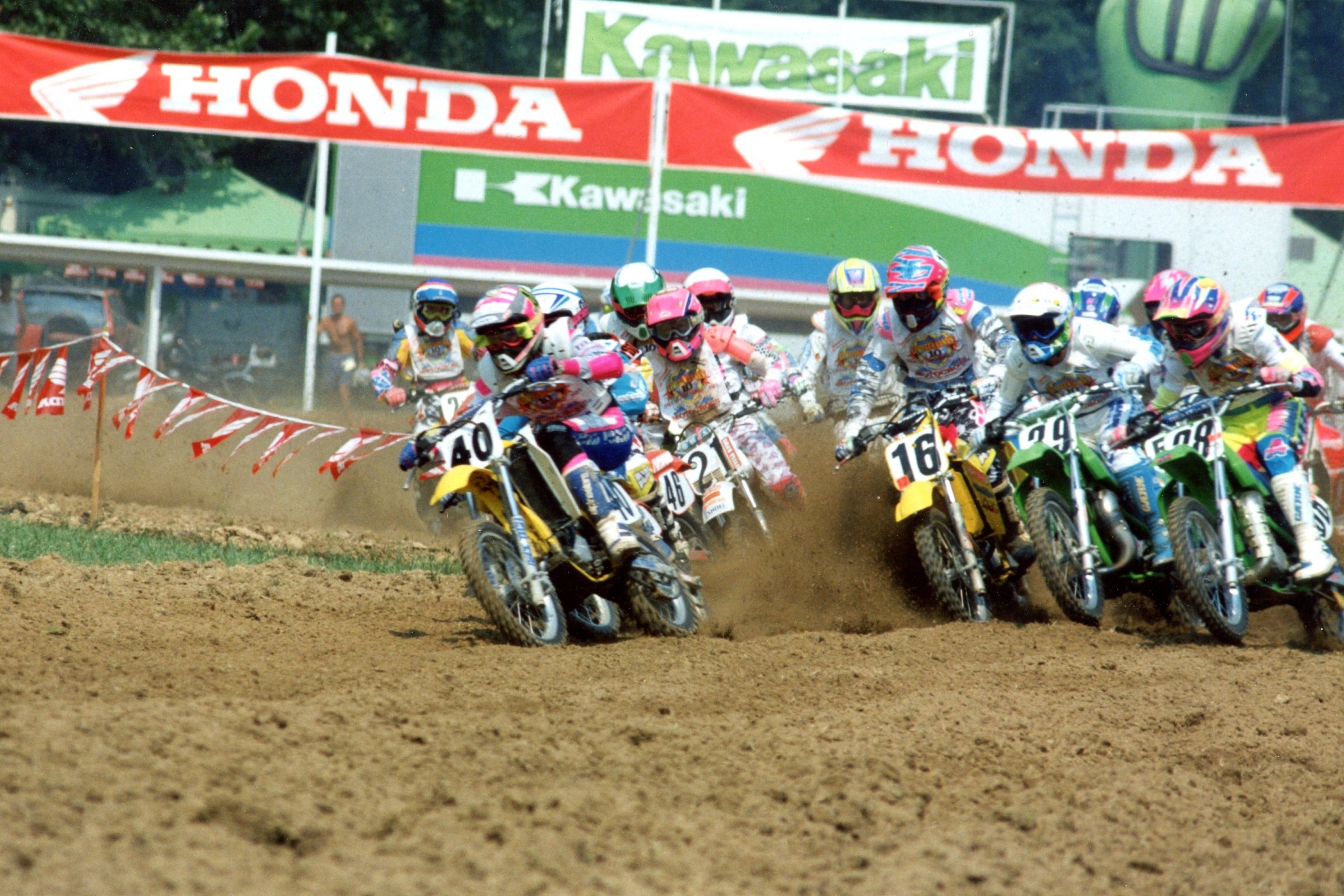 As we count down the 36 days until the start of the 2017 Rocky Mountain ATV/MC Loretta Lynn’s AMA Amateur National Motocross Championship, we are going to look back at each year in the history of the event. Today we look back at 1991.

The AMA Amateur National Motocross Championship turned 10 years old in 1991, and it was a standout year for a few riders that saw their first success as amateurs at Loretta Lynn’s.

Kawasaki Team Green’s Mercedes Gonzalez won her fifth title at the ranch, pulling her even with longtime rival Lisa Akin-Wagner. And then like Lisa, after her fifth title, she called it a career. (And spinning the wrenches for Gonzalez that year was former pro motocrosser and her future husband Derek Natvig.)

Sixteen-year-old Tim Ferry also won his fifth title (as well as his fourth) that week at Loretta Lynn’s, taking both the 125 A Stock and Mod classes on his KX125s.

The rest of the champions were a hodge-podge of fast kids and amateurs from all over the country, like Florida’s Ricky Carmichael (85cc Stock 7-11), Oklahoma’s Robbie Reynard (85cc Stock 12-13), and Louisiana’s Kevin Windham (85cc Mod 9-13), who took advantage of a broken chain by fellow Team Green rider Reynard to notch a title. There was also a pair of fast Californians in the 85cc 14-15 classes, Craig Decker (Stock) and Mike Metzger (Mod), each of whom took home a title. And Ohio’s Jeff Gibson, who later enjoyed a long professional career in SX, MX, and AX, took home the 51cc Stock (4-8) class.

All of the champions from that 10th year took home first-place trophies, sponsor contingencies, and hopefully a great week of fun experiences.

Every rider that makes it to Loretta’s gets to take home their trademark Loretta Lynn’s numbered bibs, which had become a tradition for the event by then. But that almost didn’t happen that 10th year.

A company not affiliated with the race threatened to place an injunction on the whole event if their sponsored riders were forced to wear the mandatory bibs. The bibs were given out each year because riders were asked to switch to double-digit numbers for the national (single-digit for top 10 riders the previous year) plus they just looked cool, sort of like the old Camel bibs people like Roger DeCoster and Heikki Mikkola used to have to wear back in the early days of Grand Prix Motocross. While some riders complained that the bibs made them hotter or they had rival sponsors, there was room to place stickers on them for your sponsors, so long as you didn’t cover your number on the back.

But that wasn’t enough for a small hard parts company that shall remain nameless, and it turned into quite the legal drama. In the end the protester relented, and the bibs remained a special tradition. They are the one trophy every rider gets to take home, no matter where they finish. And we’ve heard some pretty cool stories over the years about what riders and their families have done with their Loretta Lynn’s bibs. They are like a racing diploma for amateur motocross, a sign that you once went to and competed in the biggest amateur motocross race in the world. And even for guys like the aforementioned Carmichael, Ferry, Windham, Reynard, Gibson, and others who won many trophies and medals as professionals, they or their parents probably all have at least some of their Loretta Lynn’s bibs hanging on a wall somewhere.

Speaking of bibs, here is what the bibs look like for the 36th Annual AMA Amateur National Motocross Championship at Loretta Lynn’s: