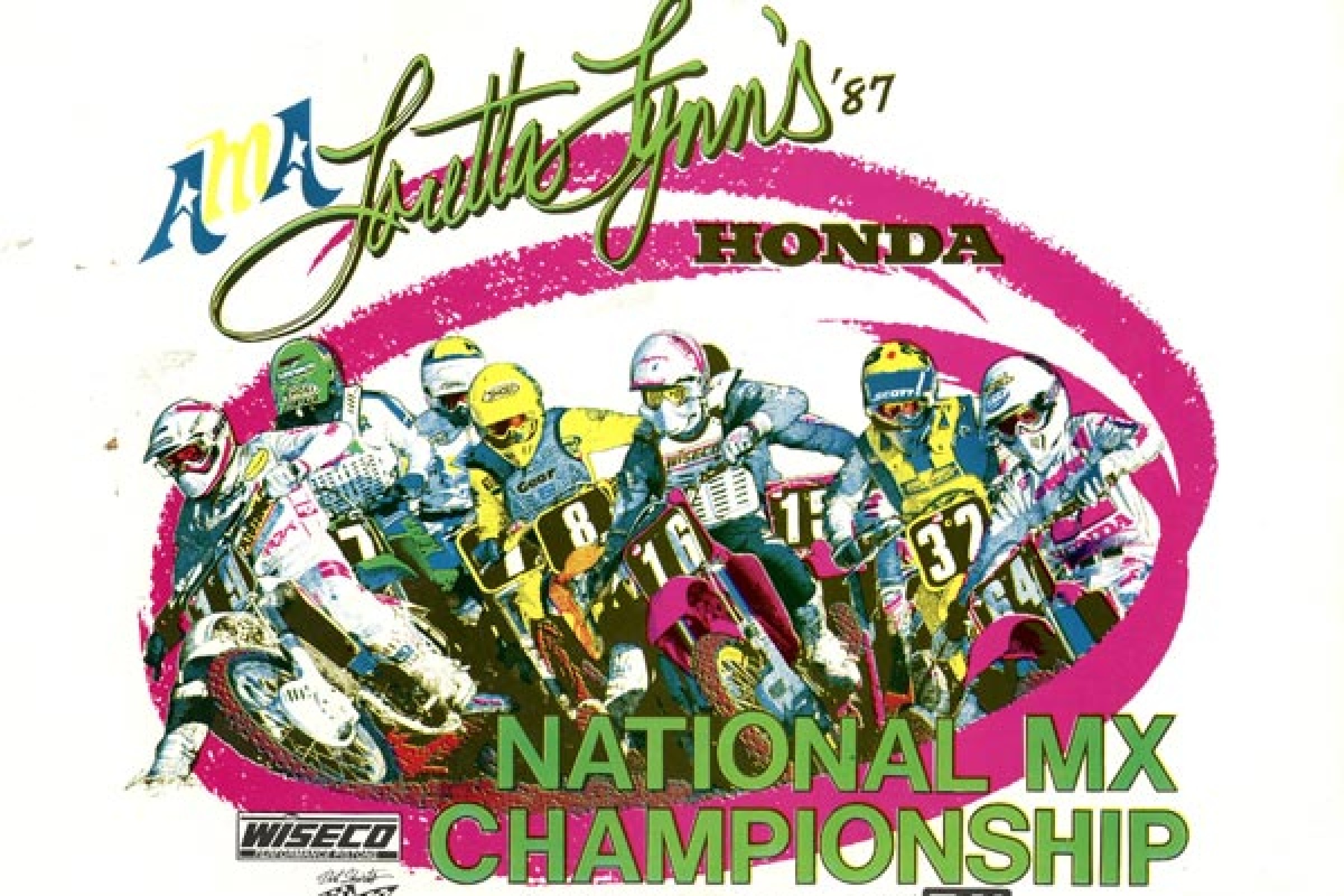 As we count down the 36 days until the start of the 2017 Rocky Mountain ATV/MC Loretta Lynn’s AMA Amateur National Motocross Championship, we are going to look back at each year in the history of the event. Today we look back at 1987.

One of our favorite trivia questions heard around Loretta Lynn’s Ranch every now and then: Who is Tommy Bilz Jr.? Chances are really good that unless you live in Doraville, Georgia, you have no idea.

Yesterday we talked about the controversy that sometimes surrounds former pros who come back to race the vet classes in the years after their AMA Supercross and Motocross days are over. The loudest critics aren’t the ones racing the Ricky Carmichaels or Jeff Emigs or Robbie Reynards on the starting gate. Rather, those rank-and-file vets seem to love the idea of getting out on the racetrack with those recently-minted legends.

However, that’s not the case in the other division that cause an annual uproar online, and some major headaches for the AMA and MX Sports. Now we’re talking about the C classes, those Novice/Beginner ranks that are supposed to be for actual “novice” and “beginner” riders, but often become one big class almost always under protest.

The rules seem simple enough, including restricting the classes for anyone with more than two years or racing experience, and also not allowing anyone who has ever raced at Loretta Lynn’s AMA Amateur Motocross Nationals before, no matter what the class, as well as where you are in your local district, and so on and so forth. It can become a season of detective work for folks at the AMA and MX Sports, made all the more difficult by the fact that the amateur landscape has changed over the years, and some riders prefer to practice all the time and rarely race, trying to keep their eligibility for a shot at a C class title. Or they come from overseas, which makes checking their track records a little more difficult. After the late Oscar Diaz of Costa Rica won a C Class a few years back, and it was discovered to have been racing for years back home, international riders were not allowed entry into the C classes at all.

The C classes first appeared in 1986, just as the race was gaining momentum and importance. It caused something of an uproar—how can you have a “national championship” for beginnings? –but the races went on, and have been going on ever since. There were two C classes in 1986, 125 C and 250/Open C, and both were won by Bryan Jerrigan of Marietta, Georgia. How good was Jerrigan? Hard to remember, but he never qualified again in any classes, nor is he in the Vault as having ever raced as a pro.

The winner of the 125 C Class in 1987, however, is a name everyone is familiar with. Jeremy McGrath started racing dirt bikes later than most, having first went into BMX while growing up in Murrieta, California. He was 15 years old when he and his family qualified for Loretta Lynn’s for the first time, and he entered the 125cc Schoolboy (14-15) class and 125 C. His moto scores in the Schoolboy class were 18-15-15 for 14th overall. The winner of the class was Tallon Vohland, a rider that McGrath would some share a 125 Supercross podium with. (Also finishing ahead of McGrath that class were future pros Junior Jackson, Steve Herman, David Beckington, and Joe Maurer.)

In the 125 C Class, McGrath did much better. He went 1-1-2 on his Yamaha YZ125 to earn the class title. Unfortunately, we don’t have any photos of Jeremy from that race because, well, who knew he would someday become the King of Supercross and the most popular rider in the world?!

McGrath’s win in the 125 C Class in 1987 was his one and only Loretta Lynn’s title. He came back in 1989 and ’90 and raced the A classes but his best finishes were a pair of thirds, with guys like Jeff Emig, Steve Lamson, Ryan Hughes, Mike Brown, Phil Lawrence and the aforementioned Vohland and Herman finishing ahead of him in various classes. But at the end of the 1990 AMA Supercross Championship, just four years after he won the C Class at Loretta Lynn’s, McGrath won the Las Vegas 125 Supercross as a Kawasaki Team Green rider. Three years after that, he would win his first of a ridiculous seven AMA Supercross Championships.

McGrath’s win in ’87 didn’t cause much of a stir, but in years to come there would be C class winners who did, like Axell Hodges, the freeriding, free-spirited star of all of those Monster Energy videos, who won 250 C Stock in 2012. Axell just wasn’t much into racing, so he didn’t have the experience to be kicked out of the C class, but he certainly had talent from years of riding dirt bikes in the desert.

If you peruse the Loretta Lynn’s Vault, you will find lots of champions in the C classes, and chances are you’ve never heard of most of them, though there are some late-starting, quick-learning exceptions who went on to do something as a pro, like Jeremy McGrath in 1987.

Which takes us back to our original question: Who was Tommy Bilz Jr.? We don’t know much about him, as he only raced at Loretta Lynn’s once, and that was back in 1987. He raced the same 125 C Class as McGrath, and he finished third overall on a Honda CR125. But what we find so interesting is the fact that his scores—12-2-1—show that Tommy Bilz Jr. was the Novice/Beginner who beat McGrath in the third and final moto at Loretta Lynn’s in 1987. Which means wherever he went in life after motocross, he had one hell of a good story to tell people about the time he beat Jeremy McGrath!