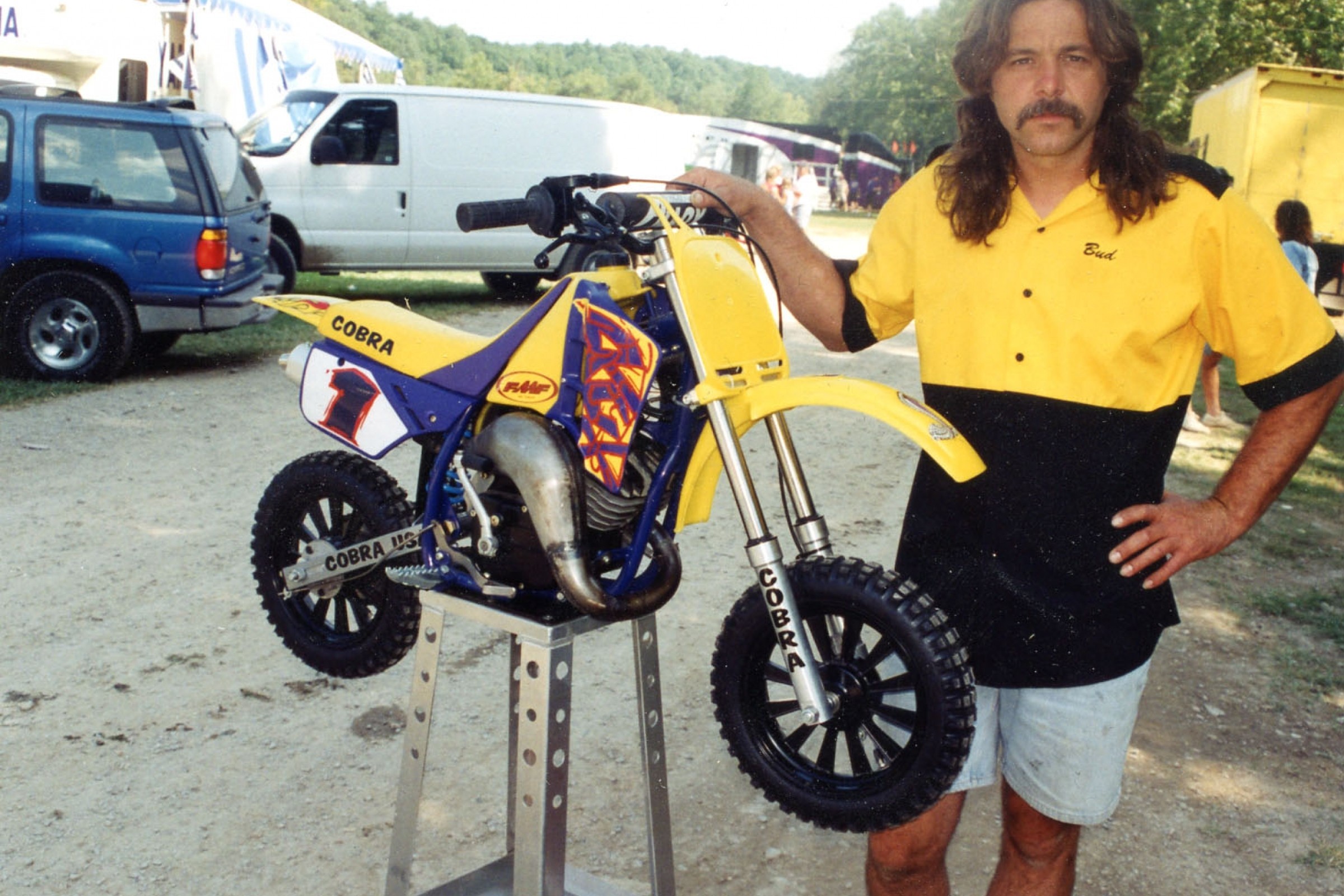 As we count down the 36 days until the start of the 2017 Rocky Mountain ATV/MC Loretta Lynn’s AMA Amateur National Motocross Championship, we are going to look back at each year in the history of the event. Today we look back at 1994.

The announcers at Loretta Lynn’s used to love saying that the only undefeated bike to line up at the ranch was Yamaha’s 51cc Y-Zinger, or PW. And from the first race in 1982 to the summer of 1994 that was true: Pee-wee Yamahas had won the 51cc Pee-Wee class. The streak began with Idaho’s Butch Smith and included Ross Dhayer (’83) and Jeff Dement (’84) from Texas, Ohio’s Frankie Bitner (’85) and Patrick McPherson (’86), Maryland’s Tommy Schueler (’87), Michigan’s Chris Considine (in both ’88 and ‘89), Oklahoma’s Johnny Marley (’90), another set of Ohio prospects in Jeff Gibson (’91) and David Whitcraft (’92), and finally Florida’s James Stewart and North Carolina’s Stephen Martin. By that point the 51cc Class had evolved into two age divisions and Stewart won the older class (7-8 years old) while Martin took the younger (4-7 years old). All of them were on Yamahas, hence the undefeated line.

That all changed in 1994, and changed forever. That’s because a kid named Brett Maimone showed up on one of three minicycles in the class that were built by Maimone’s father, Bud, in their garage in Ohio. The new bikes were yellow and they were built to be better than the Y-Zingers, which had not evolved much over the years. And why should it? They had a lock on the market at that point, as none of the other existing brands built a 51cc junior minicycle that could compete with the little Yamaha, save for the occasional Italian model like Moto Morini.

Maimone saw an opening in the market. A tool-and-die maker by trade, he and his wife Sunny had a machine shop in New Middleton, Ohio, and after watching his son Brett finish 12th in 1993 with 4-37-2 moto scores, with a breakdown in the middle moto, Maimone went home and went to work. He told the AMA what he had planned, and asked how many models he had to have on the market in order for the bike to be homologated. He was fortunate that the AMA had just made an adjustment, changing the minimum from 200 motorcycles to 50. In other words, in order for the bike to be allowed to compete in the 51cc Stock class at Loretta Lynn’s AMA Amateur National Motocross Championship, 50 of them had to be available for sale, they had to be identical and serial numbered.

“I second-mortgaged my business, second-mortgaged my house, and laid everything on the line to start building bikes,” Maimone told Racer X Illustrated back in 1999. “By January of ’94 I was in production, making my own frames. I flew over to Italy to hook up with Mario Franco on the first engines, and got one together.”

That original “unicorn” bike created quite a stir in the motorcycle world when Maimone introduced the bike at the CRA Banquet in Ohio. Everyone in the junior minicycle business wanted one of the little yellow bikes, and Maimone couldn’t make them fast enough.

And that was the big issue at Loretta Lynn’s in 1994: only three of the bikes made it to the starting gate. The demand was there, but the units were not—yet, anyway. Production problems overseas caused public problems here in America because the Cobra was definitely better than the Y-Zingers, but only three kids had them in the 51cc (7-8) class: Nicolas Evennou, Andy O’Donnell, and Brett Maimone. Among the kids who didn’t have one were the defending champion Stewart, Pennsylvania’s Broc Hepler, Florida’s Matt Goerke, Ohio’s Michael Williard and the rest of the competitors in the race.  But the AMA approved the bike because Maimone had proven that 50 identical units had been built and available to the public, they were just too late for many who had already qualified and left for the NMA race in Ponca City, Oklahoma, and Loretta Lynn’s the following week.

“Bud never cut any corners,” said then-AMA Amateur Racing Manager Hugh Fleming to Racer X in ’99. “When we realized the potential of this product, we knew the traditional minicycle companies were really going to put him in their sights. We were very careful about enforcing the approval rules with Cobra, because we knew a lot of people would be trying to find fault with the AMA if they couldn’t find fault with his motorcycle.”

The situation didn’t get any better after Brett Maimone went out and won the first moto of the 51cc (7-8) Stock class over Michigan’s Nick Adams, but that wasn’t the only controversy. James Stewart, the defending champ, was disqualified after his father crossed the track to help him with a badly coughing motor. Stewart would go on to win the next two motos, holding the line against the Cobra, but Maimone’s 1-4-2 moto scores meant that the Cobra won the championship its first time out, ending Yamaha’s winning streak in the class.

The next year, there was no problems or questions about Cobra’s eligibility as they had proliferated—Maimone’s supply was finally catching up to the demand. And it’s been that way ever since, as Cobra riders have won the 51cc (7-8) Stock class every year since—now it’s the undefeated bike in the class! Among the kids in the long line of Cobra winners at Loretta Lynn’s are Davi Millsaps (twice), Ian Trettel, Joey Peters, Justin Starling, Tyler McSwain, Mark Worth, Adam Cianciarulo, Sean Cantrell (twice), Lance Kobusch, Stylez Robertson, Ryder DiFrancesco, and more.

Bud Maimone no longer owns Cobra—he sold the fledgling business to Sean Hilbert, who has since moved the factory to Michigan and expanded the line to include several models, including 65cc minicycles—but his impact is still felt every year at Loretta Lynn’s, especially in the 51cc (7-8) Stock class. He wanted to build a better machine, and he somehow did it.

And the Yamaha Y-Zinger is still winning too. There are four 51cc classes now, including a Shaft Drive Limited class that is perfect for it. As a matter of fact, they’ve yet to lose!