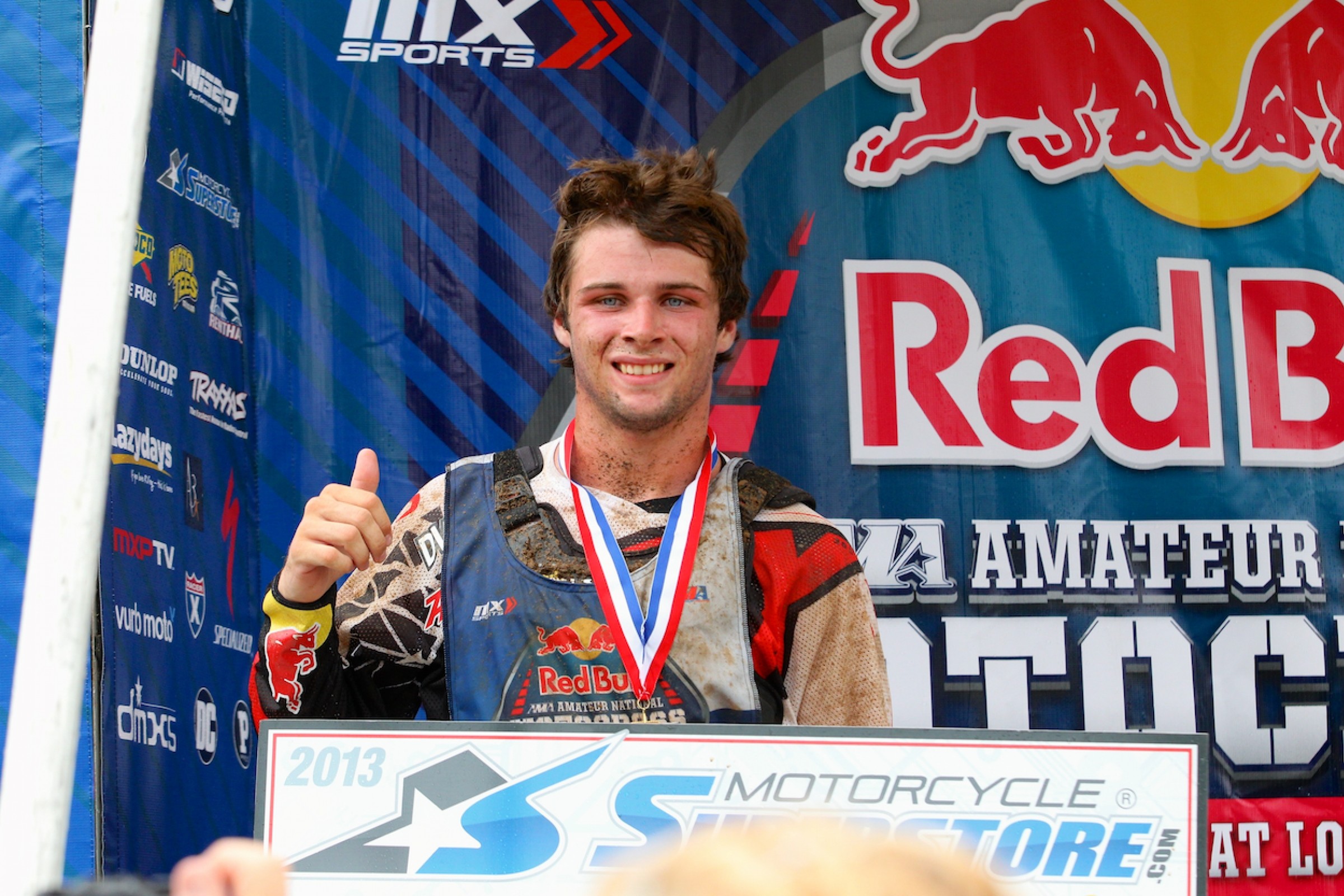 As we count down the 36 days until the start of the 2017 Rocky Mountain ATV/MC Loretta Lynn’s AMA Amateur National Motocross Championship, we are going to look back at each year in the history of the event. Today we look back at 2013.

Nashville, Tennessee, is just about an hour east of Loretta Lynn’s Ranch, but the difference is stark. Loretta’s is remote. That didn’t matter during the first 20 years of the event, but as folks started to expect cell and internet service everywhere they went, the ranch was sorely lacking. Cell Phone Hill became a thing, the one spot at the ranch where wayward racer boyfriends could get a signal and call their girlfriend back home. Internet? Not likely. In 2005, Kevin Kelly, Wes Williams, and the folks from DMXS Radio planned to provide a daily video internet review show from the ranch, which would provide the outside world’s first real look into the races on the daily. A cell technician gave Kevin a device guaranteed to provide internet service literally anywhere. Kevin drove five hours from his house in Atlanta, Georgia, with full Wi-Fi … until the last 10 minutes, when he approached the ranch, and the signal died.

Through trial and error the MX SportsCenter shows began to happen reliably, live internet results on MXSports.com began to scroll from the scoring tower, Cell Phone Hill got a little better, and for the first time the RacerTV crew started purchasing time on NBCSN and airing highlights of the races on TV. The outside world finally had a window to watch the races through. This raised the profile of the event, and then a big push came when Red Bull took over as the title sponsor. In 2012, Red Bull covered the race as part of its coveted Signature Series on NBCSN. The ratings were good and interest kept climbing. So for 2013, they planned an even bigger move—live coverage on NBC.

In came the full setup—the same production crew that handled the regular rounds of Lucas Oil Pro Motocross each week, bolstered by Red Bull’s production team. Even Wes Williams, the man behind the original MX SportsCenter shows eight years earlier, was part of the team. Maybe this doesn’t seem crazy now, but the idea of live NBC coverage of an amateur race in this remote location was surely never, ever on the radar when this event started 30 years earlier.

The timing seemed amazing, too, because two huge amateur names were going to lock horns in the A classes. Adam Cianciarulo had ruled the Supermini classes at Loretta’s for three years, and was now tied with James Stewart and Mike Alessi for the most amateur (non-Vet) titles all time. But Cooper Webb had ruled the B class in 2012, and would be damned strong in A, also.

Except both riders ended up skipping their final year at Loretta’s to make their pro debuts at Hangtown. Webb finished fifth in his first career pro moto. Not a bad decision. Meanwhile, Cianciarulo’s debut was delayed until Budds Creek later that year due to a bout with salmonella poisoning.

The 2013 battle for the AMA Horizon Award came down to Matt Bisceglia and Shane McElrath. It made for a good story, as Bisceglia had been a front runner for years and had great support from the potent Factory Connection (GEICO) Honda team. A year earlier, Bisceglia battled Webb in the B classes, but McElrath, an unknown privateer, got in the mix too, shocking many. Troy Lee Designs quickly picked him up for 2013, and he and Bisceglia battled all week in the A classes, the expected star against the Cinderella story. Bisceglia got the better of it, topping McElrath in 250A and Open Pro Sport to collect the Horizon Award.

Factory Connection Honda also had a fast B class rider in Jordon Smith. He handled his business in 250 B Stock by winning all three of his motos. A new star was set to break out, though, with Yamaha’s Aaron Plessinger. It rained hard at the start of the week, and Plessinger, schooled in mud thanks to his GNCC experience, was strong early. The track dried as the week went on, but Plessinger proved he was no fluke, rolling to the 250B and 450B Limited titles in a six-moto sweep, enough to lock in a spot with Yamalube/Start Racing Yamaha for the future. Until 2013, Plessinger was just outside of the “can’t miss” prospect list. His B class breakthrough launched his career.

A few other notes: During the Area and Regional qualifying season, a rider named Jerry Robin grabbed headlines for making the B class on a 1985 Honda CR250R. He showed up with the ’85, but the mud discouraged him from racing the old machine. Somehow, he ended up on an old, but less old Honda, a late ‘90s bike, and won the Two Stroke (16+) class.

But for all the network TV hype and battles at the top, the 2013 race could someday go down in history for something else. For years, a gaggle of young racers from Bakersfield, California, had been crushing the 51cc classes. In 2013, Jett Reynolds became the next star from that Bakersfield bunch. He won both a 51cc and 65cc class in the same year, the first to do so since Davi Millsaps back in 1997. Since then, incredibly, Reynolds has won every single title he’s competed for at Loretta’s, eight-straight championships and counting. If he keeps this pace up, in two years he could eclipse the record of Stewart, Alessi, and Cianciarulo.