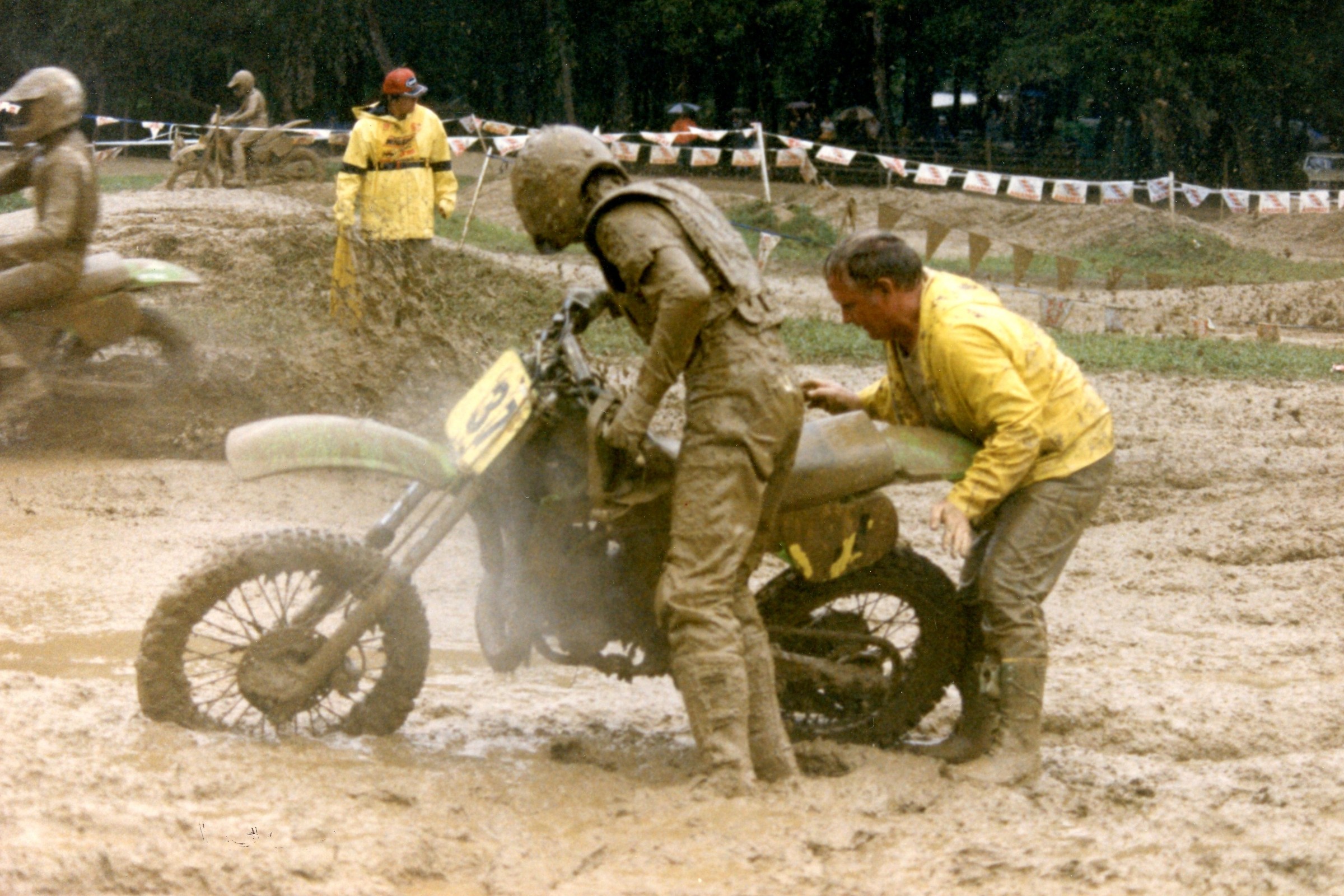 As we count down the 36 days until the start of the 2017 Rocky Mountain ATV/MC Loretta Lynn’s AMA Amateur National Motocross Championship, we are going to look back at each year in the history of the event. Today we look back at 1985.

If 1985 was remembered for one thing, it was Danny. Not a rider named Danny, but Hurricane Danny. After a dry first set of motos, what started as a tropical storm in the Gulf of Mexico had turned into a full-blown hurricane, then moved inland toward middle America. By the time it reached Loretta Lynn’s Ranch it was enough to drown the proceedings in rainwater. After trying to wait out the storm it became apparent that the second and third motos were going to be mudders. As a matter of fact, it got so bad that the third and final set of motos were scrapped all together. So the 1985 AMA Amateur National Motocross Championships were decided by one set of dry motos, and one set of mud motos.

To no one’s surprise Yamaha’s adolescent star-in-the-making Damon Bradshaw won the 85cc Stock and Mod (12-13) motos on his YZ80, topping a fast pack of riders that included Brian Swink, Jeromy Buehl, Jimmy Gaddis, Gene Naumec, Junior Jackson, and more. For Bradshaw, who hailed from North Carolina, the two titles actually marked his first at the ranch, as he had issues in at least one of his motos during the first three years he was there.

A South Carolinian named Hank Moree Jr. also seemed like he was going to have a stellar pro career like Bradshaw, but it didn’t quite pan out like that for the Kawasaki Team Green rider. However, he did win the 85cc (7-11) Mod class over a California kid named Buddy Antunez. The 85cc (14-15) Stock and Mod classes were both won by Lowell Thomson of Idaho.

In the B classes, Team Green’s Frankie Brundage was the only two-class winner, taking the 250 B Mod and Open B classes. Jimmy Wooldridge and Chris Coleman topped the 125 B Stock and Mod classes.

Robbie Neeley won the Vet +30 Class over Barry Higgins, and Doug Sanger won the +40 Class over a gentleman named Bob Krah. And fourth-place in that +40 Class? My dad, Dave Coombs Sr., who also happened to be the event co-founder and promoter.

I bring my dad up here because he was always sensitive to the concept of an even playing field. The track was never used except for this race and the ATV Dirt Days that followed. The gate was closed on the track, grass was planted and Loretta Lynn’s horses were the only ones allowed out there from year to year. A big reason was because my brother and I were racers, and Dad never wanted anyone to think that me or my brother Tim had any sort of advantage at Loretta Lynn’s.

And that was a problem in 1985 because my brother was one of the top Pro-Am riders in the country, and he entered the 250/Open Pro-Am class and won the first dry moto on his YZ250.  Timmy was also a great mud rider (he would win the Blackwater 100 three years later) and so it was no surprise to me that he went out and dominated the second moto as well, which was a true mudder.  There were some good guys out there too: Tyson Vohland, Trampas Parker, Shaun Kalos, Keith Turpin, Rodney Barr, Mike Jones….

So here was the predicament: Tim Coombs was sitting on a 1-1, and the rain wasn’t stopping, but my dad didn’t want anyone thinking he called the third motos off because Timmy was in the driver’s seat in the 250/Open Pro-Am class. The track, however, was literally under water. So my dad decided to lay out another track that ran basically beside the actual track, on the water truck lanes. Then, with everyone watching, he went out on his own YZ250 and showed that the track was passable (my dad was a good mud rider too). He slithered and splashed around and somehow made it work, and then called a riders’ meeting. To a man (and woman), everyone told him to just call it a year and let everyone go home. Hurricane Danny had won 1985!