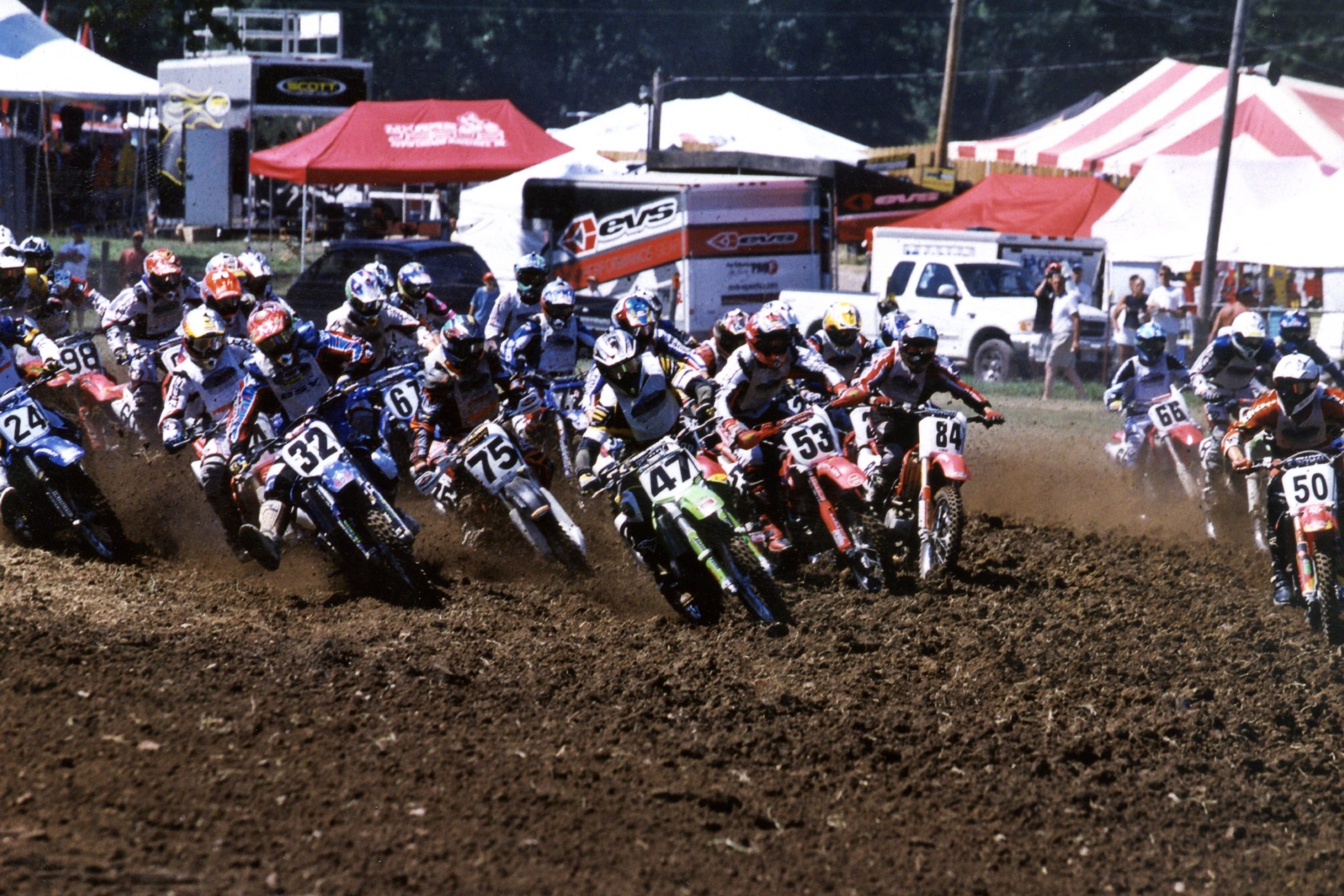 As we count down the 36 days until the start of the 2017 Rocky Mountain ATV/MC Loretta Lynn’s AMA Amateur National Motocross Championship, we are going to look back at each year in the history of the event. Today we look back at 2002.

There are times, oddly, when one amateur sensation is so hot that he creates a vacuum effect. When a rider graduates with huge hype, the next year often features lesser-known riders at the front. I’m not sure why that is, but I have proof:

Kevin Windham graduated Loretta’s in 1994. Ricky Carmichael graduated in 1996. Travis Pastrana graduated in 1999. James Stewart in 2001. Rare do we see back-to-back years of mega-hyped mega stars. I can’t figure out why that is and maybe it’s nothing more than sheer coincidence. I do know that after Stewart left the ranch for good in 2001 with the new all-time mark of titles, the 2002 event rolled up without any huge favorites in the A classes. The door was open, and a kid named Evan Laughridge stepped through it.

Laughridge, of Forest Ranch, California, was armed with a Suzuki ride, and at that time Suzuki was building arguably the most potent team in the amateur pits. Amazingly, Laughridge only raced Loretta’s once before—the previous year when he collected sixth and fourth overall in 125 A and 250 A. By the end of 2002, he’d walk off with the coveted AMA Horizon Award.

In 125 A, Laughridge proved he was no slouch by beating the well-known prospect Josh Hansen, with 3-1-1 scores to Hansen’s 1-3-3. Michael Blose rounded out the podium. With two A-class titles, Laughridge made for an easy Horizon Award pick. Suzuki put him on its AMA Arenacross team for 2003 as an introduction to the pros, but things never quite worked out, and Laughridge’s last result listed in our Racer X Vault for pro racing is a 10th overall at Steel City in 2005. Anyone know what he’s up to today? Let us know in the comments section if you do.

Hansen had one other chance at a title, in 250 A/Pro Sport, but he would have to battle a former professional star and a new trend in amateur racing. Jeff Emig, just two years after an injury-plagued 2000 season ended his pro career, was back at the ranch riding Kawasakis with the number 47, just like he did in his previous amateur days, which ended with the 250 A championship in 1989. Fro wanted to go racing again, so he entered one age class (Vet 30 Plus) and also one A class to test himself against the fastest kids of the day. His return to the ranch is really what kicked off today’s trend of former factory riders getting back into the Loretta’s game post-retirement.

Fro got the better of Hansen to win 250 Pro Sport with 2-2-1 scores, compared to Hansen’s 1-2-3. But Emig’s inclusion in the Vet class drew the most attention, as a rider just five years removed from the AMA Supercross Championship definitely rankled many of the “traditional” amateurs. But, oddly, Emig didn’t win that 30 Plus title! Emig was pitted against the growing playground legend known as Kevin Walker. Walker didn’t experience much success as a pro, but found his true calling when he returned to Loretta’s Vet classes. Walker started winning with a 25 Plus title in 1995, and by ’02 was known as a master of the ranch. He and Emig battled hard, but when Emig crashed in a moto and couldn’t restart his KX250—his exhaust had gotten plugged with dirt—Walker went on to win the Vet 30 Plus title, and also added the 25 Plus title. By then, he had amassed seven championships at Loretta’s.

One other note from the ’02 edition: this race kicked off the Mike Alessi/Ryan Villopoto rivalry, which within a year would grow red hot. Alessi’s main adversary, Davi Millsaps, had grown too big for minicycles and instead raced 125 Schoolboy, winning five of his six motos and sweeping both titles. On minis, Alessi was expected to roll, but Villopoto, then Yamaha supported (how about that for one that got away?) was coming into his own, showing speed he had never had on a 65.

Alessi and Villopoto battled hard, and the fans and industry started packing the fences with increasing intensity as the stories unfolded throughout the week. Controversy seemed to follow the Alessi group everywhere, so as word of “this other kid who could maybe beat him” spread through the ranch, their races became must watch events.

Villopoto was indeed fast, but Alessi was a machine down there, nailing every start, avoiding mistakes, and generally managing every situation with robotic efficiency. Final score? Five moto wins for Alessi, one for Villopoto.

Have a look at the 85 (9-13) Modified results  and the 85cc (12-13) Stock results  and see how many impact pros you note throughout these classes. To spot all the talent, though, you need to scroll through all of the names, including the rider who finished 32n­d in the stock class.