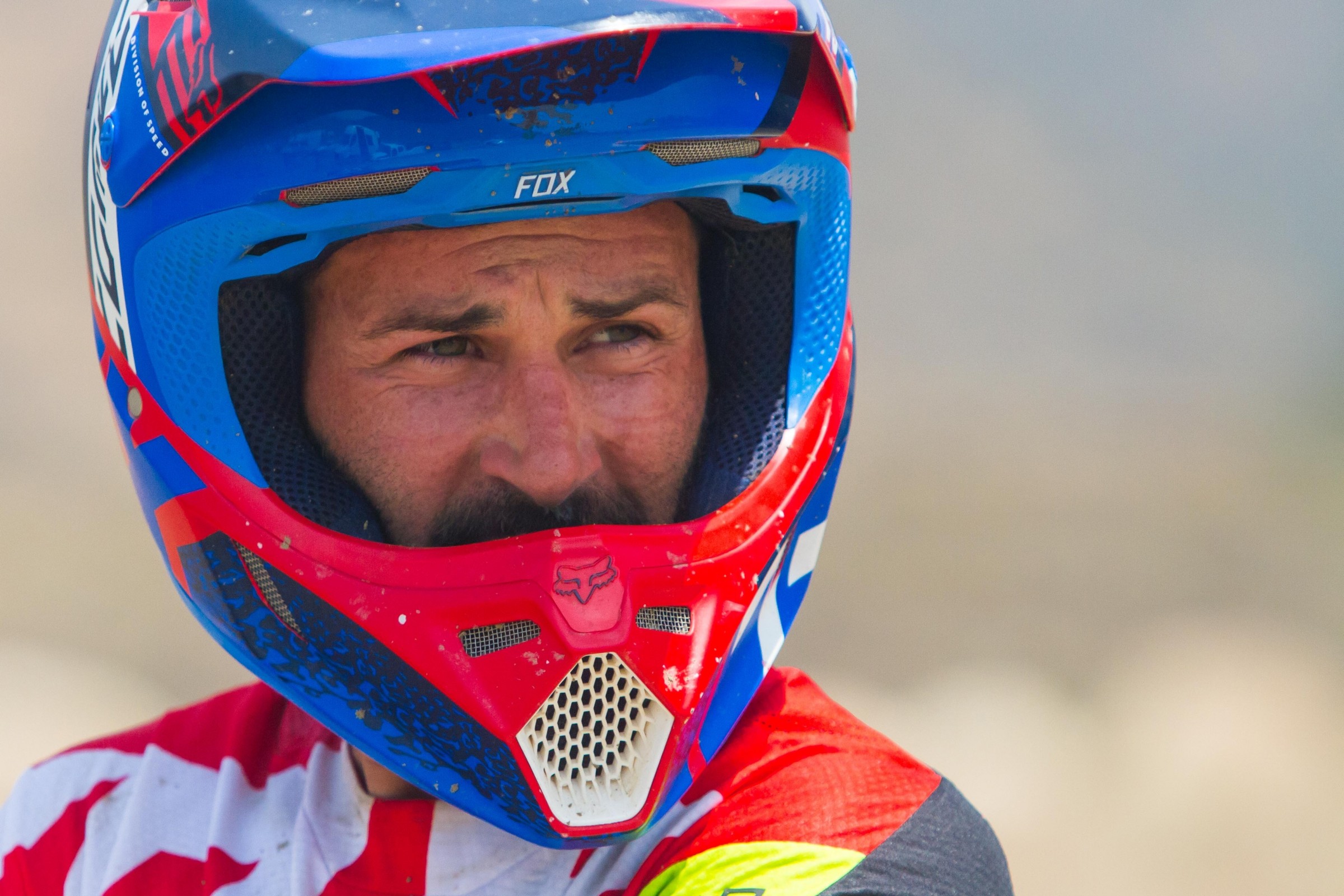 In 2014, after 14 years of racing professionally, Ivan Tedesco announced his retirement from racing. Upon his retirement Tedesco began test riding for RCH Racing Suzuki, the team he used to race for. Near the end of 2015 he had a bike issue during practice for Red Bull Straight Rhythm that left him with a shattered heal—an injury that took him about a year to recover from.

Since injuring his heel he hasn’t ridden a whole lot and has taken some time off to be a family man. But now he’s back—kind of. Ivan will be filling in for David Pingree this year at the final round of the FMF 125 Dream Race Invitational Triple Crown at Washougal. We spent a few minutes with him at the practice track yesterday to see what’s been going on with “Hot Sauce.”

Racer X: What’s been going on Ivan?
Ivan Tedesco: For me, not too much in the moto world. I’ve just been hanging with the family and trying to get something going back in the moto world. I was doing the testing for RCH for a long time and got injured with a heel injury and kind of never really came back to do the testing gig. So, just kind of keeping my eyes open and trying to get back in the sport, honestly.

Are you looking for maybe a similar testing type gig like that?
Yeah. I’m looking for something. I don't know as far as supercross testing. You’ve got to be on point and kind of in the game to do that. But as far as outdoor testing, production testing, or just anything else—trainer, whatever. I feel like I have a lot of knowledge, especially on the dirt bike side of testing. So, we’ll see. We’ll see where things go. Try and get my face out there a little more and get to some races.

Got the call from @dpingree101 to ride his bike he was building for the Washougal #dreamrace since he got knee surgery. Today was fun once I remembered how to ride one of these things

Can you talk about that heel injury a little bit? What happened?
Red Bull Straight Rhythm in … I guess it was ‘15. I went out there just for fun. I was already retired, just kind of going to do it for fun. I’d been testing a lot at the time. I went there and had a bike problem. We had a bike issue off one of the biggest jumps on the track and had to bail off and shattered my heel. That was just a long process. It took me about a year before I was walking around and able to kind of live a normal life. So, after that I decided to give up on the testing deal and really haven’t been riding too much since, really.

You’re riding out here today at Pala Raceway, how do you feel?
I feel good, other than I’m out of shape and right now sweating my ass off, but it’s good. It’s good to come back out here and get on the bike and hang out with all the guys. Like I said, I want to kind of get back into it for sure.

Last year you raced the 125 Dream Race at Washougal. You’re going to be filling in for Ping [David Pingree] this year, right?
Yeah. Ping called me like two weeks ago. He got knee surgery [on his] meniscus. He already had a bike built, a KTM 150. So, I decided to do it again. Maybe this year get a little more prepared. Last year I kind of just showed up and raced, so it should be fun.

With maybe more than one practice under your belt you might do better this year. You got second last year, so there’s not much better you can get.
Last year was sketchy. I hadn’t ridden a 125 in 12 years. I showed up to Washougal and I got 10 minutes on the track after it was already rough and then go race. So, I was a little scared last year. This year I’ve got two days on it so far, so I already feel more comfortable.

Are they interested in dirt bikes? Is it something you’d rather try to keep away from them?
I don’t care what they end up doing as long as they’re happy and they’re into it. Right now, my older one, he’s not too into it. He’s into the ball sports and all that. My younger one, he’s been asking the last few months about getting a dirt bike, so we’ll see.

You were living in Texas and Florida for a bit. You’ve kind of bounced around a little, right?
I’ve had a house here in California for about 15 years and that’s where I’m still at. I did move to Texas for a while and then to Florida to [Ricky] Carmichael’s place for a while to train with him. My wife’s family is from out here in California, so we ended up back out here. Now that I’ve got kids, this is where we’re at.

What have you been thinking about the Lucas Oil Pro Motocross races this summer?
It’s been good, man. Some of the best racing we’ve had in a while. It will be cool to be up there at Washougal and see it in person. I love that place. It’s a cool track.

What do you think about [Eli] Tomac hitting his stride here coming to the halfway point of the season?
I thought it was going to come sooner, but I knew it was going to come sooner or later. He’s good. He just seems like it’s a confidence deal, just like anybody. Once they get rolling, they’re pretty much unstoppable. It sucks Marvin [Musquin] got hurt. He was on a roll. Right now it looks like it’s Tomac’s.

What are your thoughts on the 250 class?
[Zach] Osborne has been surprising all year. He’s always had speed. He’s been around for a long time, but for him to have a breakout year like that in supercross and outdoors it’s pretty amazing to see. Some of those other young kids, they’re cool to watch.