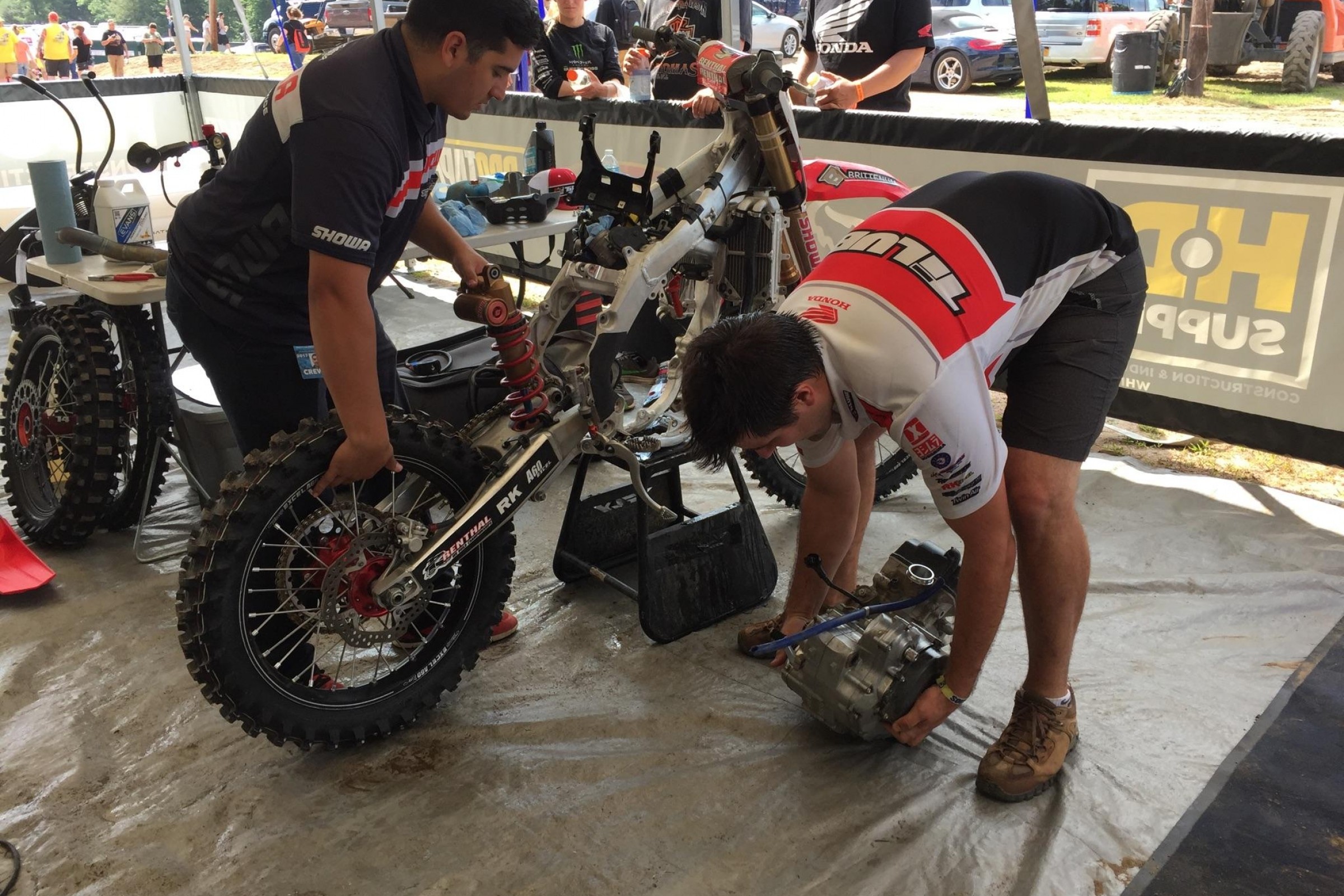 Motocross makes no sense. Sure, there are examples of high-paid athletes, but for every racer who got rich from motocross there are thousands of others who don’t even have the funds to make it from race to race. And if they do, they race on some of the most brutal tracks in the world in extremely physically demanding conditions. Why would anyone want to do this? It’s not something people who aren’t familiar with the sport understand, but for those who race, the answer is simple—love of the game—and it was on full display last weekend at Southwick in Fredrik Noren’s pits. That’s where his mechanic, Tyler Nowlin, was working feverishly to replace Noren’s blown motor before the gates started dropping.

Noren’s race bike was originally scheduled to arrive on Thursday, but thanks to a broken turbo in the truck that was delivering the bike, it didn’t arrive until 6:45 on Saturday morning. Fortunately, there was still time to get the bike through tech inspection, and the stress started melting away as Noren and Nowlin headed to the track for the first practice. The calm didn’t last long.

“He [Noren] went out for practice, and he got one or two fast laps in and he came by the mechanics’ area and the bike was going up in smoke,” Nowlin says. “There was a freight train of white smoke in front of the mechanics’ area. That was stressful! I was hustling to get it back up to the pits and see what we had to do. We had to push it up that big hill from the start gate up to the pits. Freddy was behind pushing with his wife Amy, and when we got it up to the top we didn’t feel so hot. I hadn’t had enough water that morning and I was like, ‘I’m about to pass out right now and I have to swap a motor!’”

Noren didn’t have a spare engine or spare bike, and with the motos approaching, nobody would have blamed him if he and Nowlin had cut their losses, regrouped, and came back swinging at Spring Creek, especially considering Noren was only able to log a few practice laps. But their love of the game is strong, and Noren went on the prowl for a motor. Factory Honda, who Noren has a good relationship with, was first on the list, but that team uses bikes equipped with electric start, while Noren’s starts by leg. Bump starting it was an option, but not an attractive one, considering the possibility of a crash. After more browsing of the pits, help came from Chris Makuta, a fellow privateer who neither Noren nor Nowlin even knew before Southwick.

“I’d never even met Chris [Makuta] before and neither had Freddie,” Nowlin says. “He’s just a cool guy who let us borrow his motor and we can’t thank him enough. So we got Chris’ spare bike and brought it to our pits. We’ve been pitting next to Josh Mosiman, and his mechanic Avo [Averi Lison] helped tear one bike down while I was doing the other one. We took the engine over to Honda so they could put a different camshaft in it, and Adrian [Bernal] from Showa helped out a lot too while Freddie was just trying to regroup and get ready for the moto. I was a little stressed, I’m not going to lie! But it turned out good and we even had a few minutes to breathe before we went out for the moto.”

When the first 450 gate dropped Noren got a good jump and shot out to second (a second place start on the borrowed motor!) and was able to maintain a good pace to finish eighth. A stall, and subsequent tip-over in the first turn, put Noren in nearly dead last to start the second moto, but somehow he was able to charge back to 10th to nab eighth overall, his best result of the season. You can read Noren’s thoughts on his day here.

“It went from us thinking it might be an early [end to the] day to getting in the top 10. It was his best ride of the year,” Nowlin, the mechanic, says. “Chris was our saving grace, for sure. At one point Freddie didn’t even know if he was going to be able to race and score points. The privateers at the motocross track, everyone takes them for granted, but they’re the ones who’ll give you a motor if you need one. Any other sport, it’s rare you’d see someone do something like that for someone they’re competing against. It’s not like he was like, ‘Take the motor, blow it up, I don’t care.’ He’s struggling to get by just like everyone else is. It was very nice of him to let us use his motor.”

To help show their appreciation, Nowlin installed a Hinson clutch in Makuta’s motor before giving it back to him. Then, after reflecting on the day’s shifting fortune, Nowlin got some much-deserved rest.

“It started out not so great, and turned into the best weekend we’ve had so far. We were pumped after, but we were really tired—it was a hectic day! I slept so good that night. I’m just really grateful to Chris. Freddie is one of the nicest guys in the pits, so I guess good things come to people who are good people. We can’t thank Chris enough.”