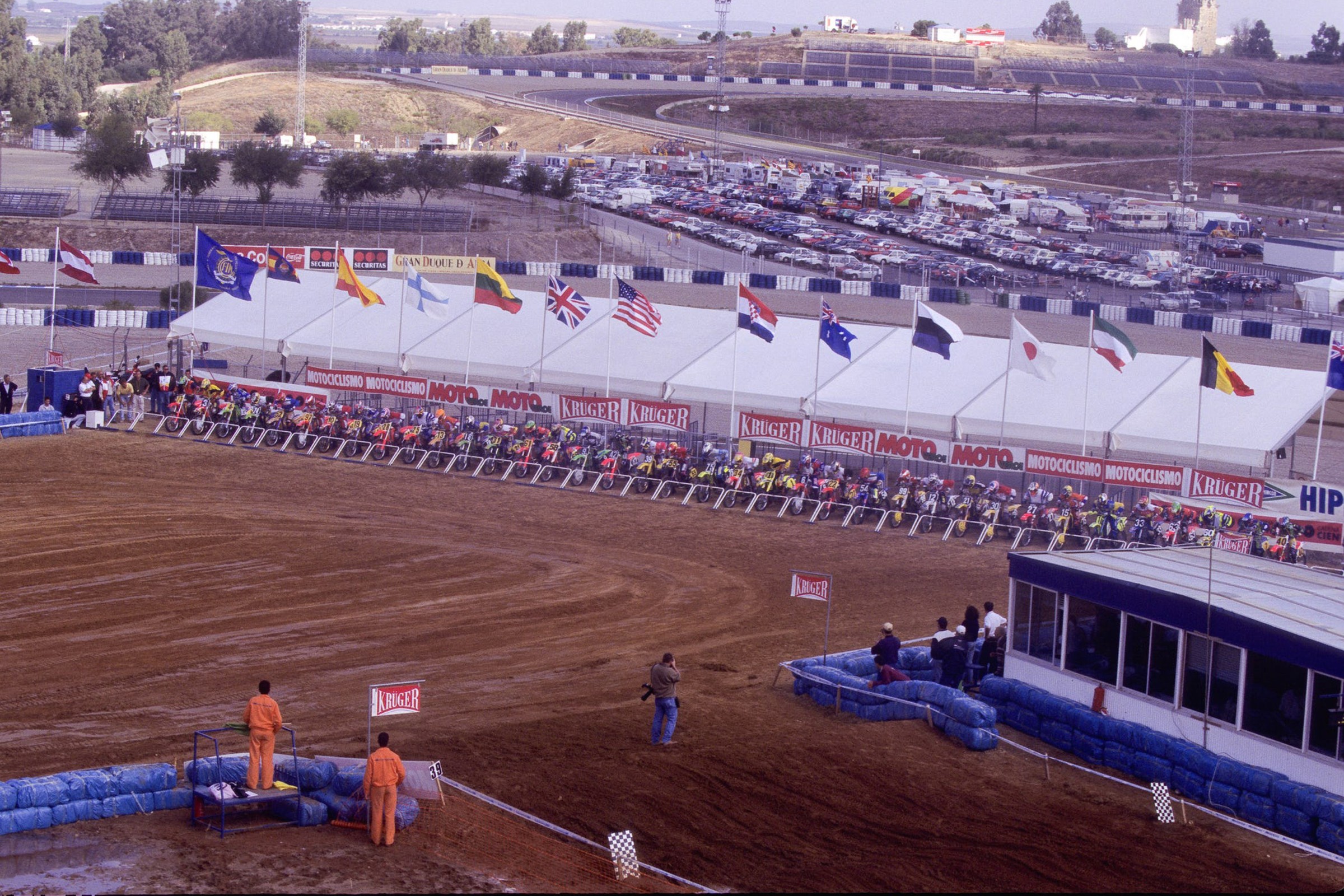 The race is still two months away, but we already know it will be the most epic motocross experience of all time. It’s coming October 6-7, 2018, when the Monster Energy FIM Motocross of Nations comes to RedBud. Combining this track with this event is an idea literally 60 years in the making. If you haven’t already been to a MXoN in person, you don’t know what you’re missing. We’re reaching out to you, the fans, to hear your stories of attending Motocross of Nations in the past. Email online@racerxonline.com with the subject line: MXoN Story for a chance to be featured.

We’re kicking off the feature with a story from David Langran, our art director, on how a trip to the 1996 MXoN in Spain changed his life. It eventually led to a job here at Racer X!

The Motocross of Nations is a special race for many reasons. For me, the 1996 event—which was held in Jerez, Spain—was not only one of the most fun weekends I’ve ever had, but it would later change the trajectory of my life due to meeting my boss, Davey Coombs, there.

I had traveled to the event with my good friends from Moto Vision (a U.K. company that used to create VHS motocross videos—remember those?), and even though I was on crutches due to a broken leg and recent surgery, I had a feeling it was going to be a weekend to remember. The track itself was laid over and around a road race circuit and had some spectacular jumps littered throughout. There was one jump in particular that was a huge downhill triple (which later got changed to a safer, but still huge downhill tabletop). I can remember watching the U.S. team of Jeremy McGrath, Jeff Emig, and Steve Lamson absolutely launching this thing and being in complete awe. I was rooting for my home team (United Kingdom), but I had always had a fascination for American motocross and thought that the riders, their gear, and everything about them just looked so cool. I desperately wanted to work in and be a part of the American motocross scene in some form or another. As an 18-year-old, I was still trying to figure just how I would achieve that.

The racing that weekend was amazing, and the U.S. team dominated. But it was what happened away from the track that was the highlight of the weekend for me. At the time, Racer X was still just a newspaper, and my friends at Moto Vision knew who Davey Coombs was and introduced themselves and me to Davey at a local bar on the first night of our stay. Davey was with his whole crew, including Jeff Cernic, Mo, Nappi, and a gaggle of other U.S. motocross scenesters from the nineties. We all became fast friends, and the night turned into a party as we bench raced and watched Cernic almost kill British racer Justin Morris with “the scorpion.” The night ended with my friend Justin Chamberlain passed out in the bathtub in DC’s hotel room. It would be fair to say we made a good first impression on my future boss.

After the race on Sunday, we made plans to meet up with Davey and crew for one last night of revelry before the long drive back to England. The entire U.S. team were out celebrating a well-earned win, and the entire British contingent (including former FIM Motocross World Champion and all-round legend of the sport Dave Thorpe) were out celebrating, and we all ended up at the same bar. My head was spinning as I tried not to act too star-struck, realizing that I was actually partying with some of my heroes! Beers were flowing, and as we bar-hopped, a whole series of events unfolded that to this day still get talked about. I’ll give you few bullet points:

You get the picture. It was a wild night! Whenever I see McGrath to this day, we still laugh about that night.

DC and I stayed in touch after the event, and he was aware of how much I wanted to be a part of the industry in the U.S. A few years later, I landed a job with O’Neal designing motocross gear and made the move to California. I would see DC at the races and would always have a great time with the whole Racer X crew. By now Racer X had turned into a magazine, and there came a point when Davey was looking for a full-time designer. I remember the phone call well when DC said I should fly back east for the High Point National and check out Morgantown (the home of Racer X) to see what I thought and consider taking the job. That was almost 20 years ago and I’m still working for the greatest motocross magazine on the planet, and DC is still my boss and a great friend. I’d like to think I would have ended up here anyway, but being at the des Nations in 1996 certainly helped!