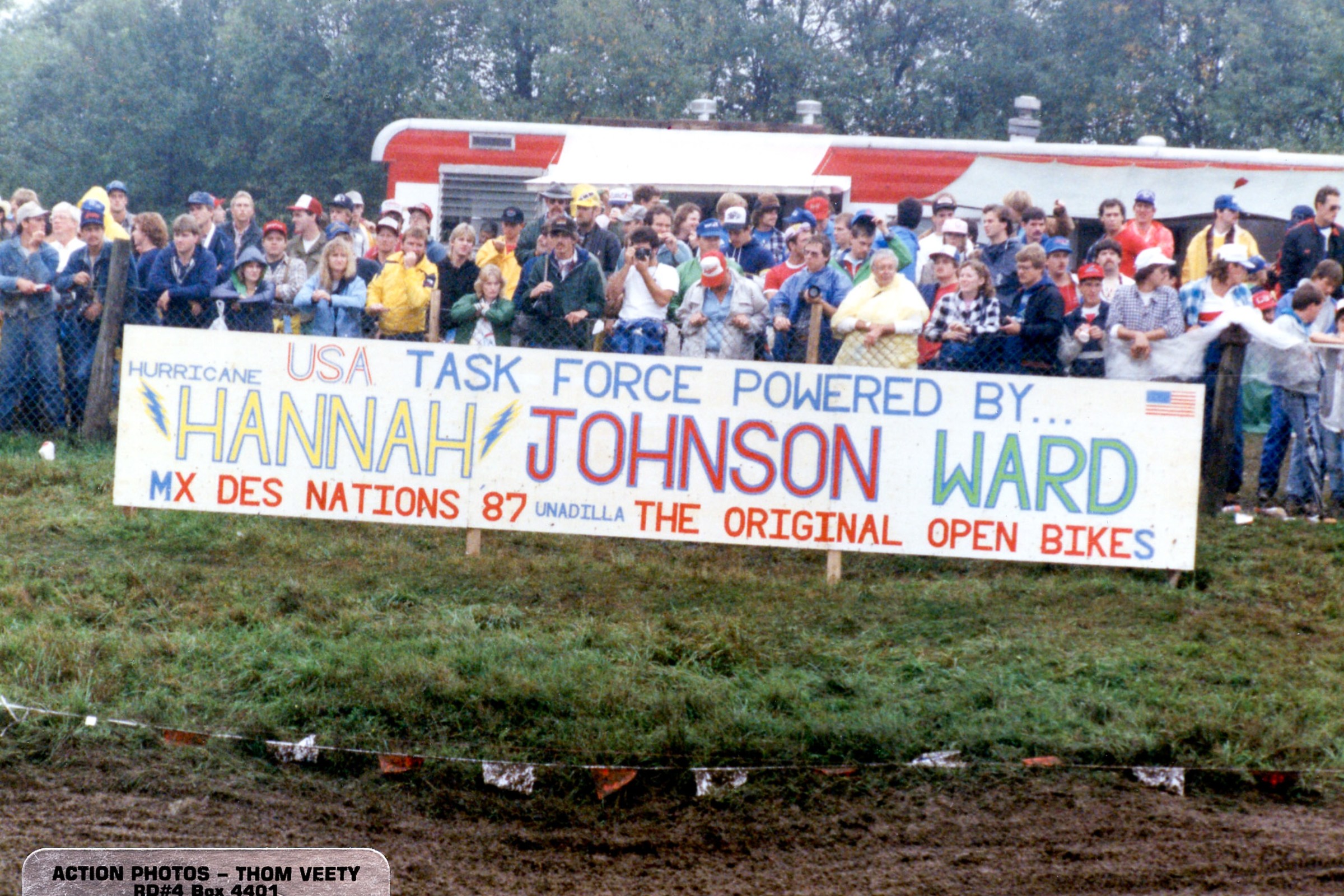 Ah, my favorite story. The time I was helicoptered into the Motocross des Nations!

Well, not actually. Steve Matthes likes to tell everyone I dropped into Unadilla on a chopper, but the reality was that I was even more of a baller. I flew to the race in a private plane!

See, my dad worked for Bel-Ray, but not in the racing department. He was in charge of inventory and mathematical things like that. Bel-Ray was always a huge sponsor of the races at Unadilla, so one day he sat the family down in front of the TV to watch The USA Network and a motocross race that was going to feature a Bel-Ray commercial!

Once the race aired, I was transfixed. This motocross racing thing was amazing! I was super pumped! I watched that 1985 Unadilla USGP on VCR tape approximately 900,000 times, so by 1987 my dad asked the bosses if maybe we could get tickets and go to Unadilla in person. This was good timing, because instead of running a GP in ’87, Unadilla would host the Motocross of Nations, the first-ever on U.S. soil.

Bel-Ray was more involved than ever. Also, somewhere along the way, Bel-Ray purchased a company plane, and they had a few extra seats on it for the quick flight from the New Jersey headquarters to upstate New York. They offered the seats to us, so my mom, dad, and I were off and flying private to the Motocross des Nations. Ballers before ballers was even a term. (Also, I have a sister, but she was not on this trip. I literally have no idea where my parents stashed here on this particular weekend.)

By ’87 I was already a student of the sport. One day, while visiting my dad at work, I discovered piles of motocross magazines in the Bel-Ray lobby. Since the company advertised in Cycle News, Motocross Action, etc., they got free copies, so once the employees had leafed through them, my dad would bring them home for me to read. At age 8, I was reading every issue of Cycle News cover to cover. This is the stuff Malcolm Gladwell could write about as a topic in his Outliers book. As a kid, I had access, for free, to every motocross and motorcycle magazine in the world. That helped shaped me for today.

Thanks to all that reading, I knew everything that was happening for Unadilla ’87. Team USA would feature Rick Johnson on a 250, Jeff Ward on a 500, and Bob Hannah on a 125. The Hannah decision was rife with controversy but everyone assured me “The Hurricane” was still very fast at Unadilla, and the fans would get pumped on him and handle the rest.

I remember watching practice on Saturday. Some European was sending it out of Gravity Cavity, somehow flying even farther and faster than Ricky Johnson. Then, track announcer Larry Maiers yelled out, “That’s 250 World Champion Eric Geboers!”

I was so scared. Geboers looked SO fast. I remember I couldn’t sleep that night (at a Howard Johnson’s hotel) because I was so afraid Geboers would smoke RJ and end Team USA’s win streak at home. I also noticed it had started to rain. I never fell asleep and the rain never stopped.

By race day, the track was a complete mess. It was an all-time mudder, and Team USA had three dudes from California. Oh my God, we were dead. The first moto was a disaster, immediately, as Ward looked to have gotten the holeshot, but then came around half a lap later way back, with his goggles hanging around his neck. Then Maiers announced that Hannah had gotten stuck on a hill. We were done! The win streak was over.

Somehow Ward came back for third place in the 500s. He had no goggles for 40-some minutes in the mud, eating roost from 500s while coming through the pack. What a freaking warrior.

Hannah made it to fourth in the 125s. But the Dutch and Belgian teams were crushing it and we were way behind. I then started praying for a miracle in moto two. You know how, when watching your favorite sports team, you can almost start to visualize something crazy happening? You create ridiculous imaginary scenarios. “Well, what if we loaded the bases and hit a grand slam?” “What if we hit three quick threes and got back into this game?” “What if we intercepted and ran it back for a TD?”

Well, that was my equivalent hope for that second moto. Johnson and Hannah were lined up, and they had to go 1-1 in their classes. HAD TO. Plus, Maiers had the Unadilla crowd whipped into a frenzy. He was both scaring you with talk of the Euros, and imploring you to cheer the Yanks. It worked!

RJ grabbed the holeshot, Geboers got to second, but Johnson pulled away. Then Hannah started to roll. Oh my, did that Unadilla Valley get loud. As Hannah pulled into the lead in the 125 class, the fans were going insane with chants of “Hannah! Hannah!” and “USA! USA!” and at one point, Bob was into third overall on the track and even closing on Geboers! It was incredible.

Johnson and Hannah held on to finish first and third in the moto, and 1-1 in their classes (team points were scored by class, not overall, back then). The fans mobbed Hannah at the finish. Like, I don’t even know how but they all crossed the track and just flooded the place! They were screaming “Hannah! Hannah!” and I don’t know how they managed to get those fans back to clear the track for moto three.

USA, Holland, and Belgium were basically tied on points heading into the final moto, but that didn’t matter. The second moto made it clear what was going to happen. The ghosts of Unadilla and the motocross gods were not letting Team USA lose on U.S. soil. Plus, Ricky Johnson was the mother-effing man regardless of rain or dry. We had RJ, we were good.

RJ once told me he not only pulled holeshots in his motos that day, but he then purposely slowed up and roosted the crap out of the Euros to ruin their goggles, then pulled back away. How awesome is that?

Plus, with Wardy, you had the ultimate Team USA gamer, and the Unadilla fans were drunk on Hannah’s 125 win. WE. WERE. NOT. LOSING.

More bad weather was heading in shortly. The Bel-Ray pilot said we needed to leave or we could be grounded in our little plane until Monday. So we had to leave before Moto 3 even started! Further, in those days before the internet and cell phones, there was no way to find out what happened. Finally, I think by Tuesday, my dad heard from others who had returned from the track. Team USA had indeed won.

After the race, we heard the event would not return to the U.S. again, possibly ever. And, well, it took 20 years so those predictions were not wrong. During Team USA’s glorious (and record) 13-year win streak at this event, only one of the wins came on U.S. soil. It was muddy soil, at that, but the ground held firm.